How do you like me now? Still not much, actually.

As someone who invested numerous hours in the thankless task of selling John Kerry to a resolutely uninterested Alabama public, I can tell you that there were few places where "I voted for it before I voted against it" was a bigger joke than it was here, and certainly not without reason. But my question is: Can we count on everyone to now heap the same derision upon Toby Keith?

Keith doesn't support the Iraq war -- "Never did," he says -- and he favors setting a time limit on the occupation. He says he suspects civil war in Iraq is inevitable and predicts the Kurds will be the victors: "I promise you, they'll end up with it all." (My emphasis.) 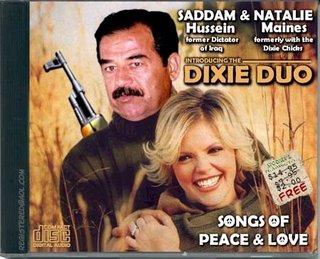 Seriously, can anyone find me an instance from before May 2003 in which Toby Keith went on record as having opposed the war in Iraq? Anybody?

I know, I'm probably being ungrateful and ungracious. I should be happy that yet another prominent individual (one with conservative credibility, no less) has, for whatever reason, joined the anti-war chorus. And yet the only thing I care to say to Keith in this instance is: Fuck you, Toby, and the Ford truck you rode in on. And that's courtesy of the red, white, and blue.
Posted by Astronaut Mike Dexter at 12:47 PM

He'll be doing a duet w/ Yoko Ono singing "Give Peace A Chance" before you know it. Then get into that Ford truck to race to a NRA rally to sing the Megadeth ditty "Holy Wars" w/ Keifer Sutherland in character as Jack Bauer.

The audience dictates the stance. As true with musicians as it is with politicians.

Bullshit story of the week.

I'm not sure whether I'm more taken aback by this opportunistic switcheroo or his professing to be some sort of expert (whose word we should take) on how the secterian relations will shake out.