I'm kind of at a loss here. In my previous post I gave George W. Bush props for making what might be his first intelligent decision since the invasion of Afghanistan by agreeing to turn over jurisdiction for the domestic wiretapping program to an independent court, and now I'm about to make it two GOP-praising posts in a row. What on earth for?

On January 16 there was a roll-call vote on a bill commending the Florida Gators for winning the 2006 national title. One of those formality-type OK, let's do something goofy before we have to get down to the real job of running the country etc. kind of things. Everybody votes yea, they have a little chuckle, and then move on to health care or gay marriage or whatever.

Only not so fast. The vote was 414-1. The lone dissenter? Rep. Jack Kingston of Georgia's 1st District (which includes Savannah, Brunswick, and pretty much the entire southeast corner of the state).

Wow. Two other Georgia representatives, Democrat John Barrow (who represents Athens) and Republican John Linder, voted "present" (as did Californian Pete Stark, for some reason). But Kingston wasn't content to do this. He's a University of Georgia grad, he despises the Gators like a good Georgia grad should, and he wasn't going to lend his support to even the most trivial of plaudits for the Gators' 2006 title run.

I'll be honest, Rep. Kingston -- I'm a Democrat, and a liberal one at that, so I can't say that I've ever agreed with you on anything before. There's a good chance I won't ever agree with you on anything ever again. But for this independent stand, for having a pair of balls that evidently nobody else in the Georgia delegation could quite muster, you have my running endorsement from now until the end of time. Thank you, sir, and may God bless America, the 1st District of Georgia, and the Dawgs. 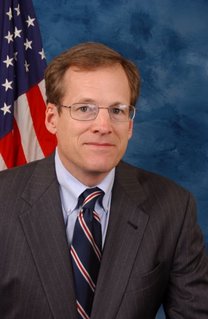 Dawg fans, Gator haters of all stripes, whether you're on the left or the right, send your kudos to the distinguished gentleman from Georgia here.

(Hat tip: EDSBS's Orson, who is not nearly so approving.)
Posted by Astronaut Mike Dexter at 8:54 AM

Maybe he is just a good legislator and realizes that indulging in such juvenile behavior at the highest level of government, where there are so many more inportant things to be doing, and his negative vote was a disapproval of this trivial waste of time?

...what grammer I let pass my keyboard, without proof-reading! Just a reflection of undue haste, not the quality of education at any university, or such!

Buckeye, are you still a little sore? Have you not quite healed from the lashing?

While I do understand your sentiment that this could possibly be a waste of time imagine, for a moment, the ridiculous bills and proposals they have to endlessly debate that basically address no issue. That, my friend, is a waste of time. And also, as much as I hate to admit it, their jobs are much harder than ours.

Wow, and I just posted a very anti-Republican screed. Wow, this is some weird "Freaky Friday" shit today. Or "Vice Versa," if that's your taste.

The redandblack.com had an article in which Kingston was quoted saying, "I always thought the Big Ten was like the ladies' league of college football." Awesome.

Yes, kudos to the GA pol taking a well-reasoned position *hold for laughs*

As for the GWB shout-out, I'd be a lot more impressed if it actually seemed like a legit re-thinking of his administration's earlier pretzel-logic infused reasoning. Unfortunately, it smacks only of a pragmatic concern about avoiding hot water since there is no longer a rubber-stamp Congress in place to prevent those pesky Constitutional issues from being raised. In other words, I still don't trust GWB OR the skeezy neocons running his adminstration to do the right thing when given the chance.