Where have you gone, Shawn Bradley? A nation turns its lonely eyes to you.

I know it might not look this way sometimes, but I like the University of Alabama. I have family connections to Alabama. For as long as I can remember, I've cheered for Alabama over Auburn in pretty much everything, frequently to the displeasure of the Auburn girls who comprise a strikingly disproportionate chunk of my dating history. Florida and Tennessee I hate, but I got no beef with the Tide.

But holy jeez, you guys have been bringing it with the unintentional comedy lately. First it was the soap-operatic search to replace Mike Shula and the continuing insistences on the part of Bama fans that Jesus Christ our risen Lord himself would trade significant parts of His anatomy to coach the Tide. Then it was the outpouring of hosannahs, kisses, hotel keys, and everything short of firstborn children to mark the arrival of Nick Saban. (And I'm giving y'all the benefit of the doubt with the firstborn-children part.) Now we have fan reaction to the 81-57 beatdown that the 12th-ranked Tide got from unranked Auburn last night.

Now, I'm not criticizing anyone for simply being pissed off about getting a furious, unlubricated, four-on-the-floor rogering from an eight-loss team. That's understandable. But check out this message-board posting a sportswriter friend of mine sent me this morning:

5853. Here's you a stat!
by [Internet handle redacted], 1/24/07 9:46 ET
Alabama's margin of defeat, 21.5 points. Top 10 team my a$$. Not even a top 20 team in my opinion, and I'm an Alabama fan! Steele's ailing, Davidson is the softest 6'10 guy I've ever seen. He had 18 or so last night I know, but he gave up at least 25 on the interior to 6'6 and 6'7 guys. I've never liked him at all. He's been horrible since day one. Gottfried is a below average coach, and he's not that good of a recruiter. If so, he would get some CULTURAL DIVERSITY!!! That's right, I said it. You know Gottfried, white people can play basketball too! I promise you wouldn't have to worry about them playing hard every game either like you do with the so-called "great" athletes you have now. They play when they wanna play. That's bad coaching.

Yes, who among us has never looked at his favorite basketball team and thought, "You know, we could really get to the next level if we could just sign some more white dudes"?

Then, of course, we've got the not-all-that-cryptic racism attendant in his implication that the black guys "play when they wanna play" while upstanding whiteys would work hard every game. But that's probably a whole post all by itself.

Anyway, Mark Gottfried: White guys! There's the answer to your road woes. Somewhere Fisher Deberry's head is about to explode. 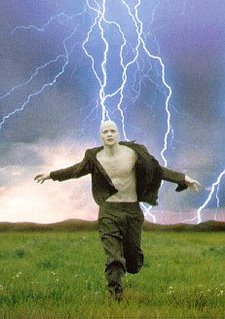 ADDED: No, no, wait, wait. Bama's next hoops superstar is clearly this kid. (Hat tip: Westerdawg.)
Posted by Astronaut Mike Dexter at 1:32 PM

You did smile when you used "whitey" as a derogatory word, right?

More Whitey? How about less of thems furrners takin' up roster spots on such beloved American sports as college track, college tennis and, uh, NBA basketball.

I've seen this sort of thing two weeks ago on the TideSports message boards. During the coaching drama, people with actual intelligence were on the boards. Since then, most of the smart people left.

I have to say, crap like this reinforces that observation.

That video was awesome. If that kid could only add about 27 inches to his vertical, he would easily be the greatest dunker in history.

Better than, dare I say, the great Kenny 'Sky' Walker.

Hack, that's almost exactly how I try to explain the UGA-GT rivalry and, more specifically, why GT fans are such knobs -- as much crap as we talk to each other, Georgia, Alabama, Auburn, SC, etc. fans really aren't all that different. But Techies . . . yeah, that's a completely different animal right there.

By the way, in case anyone's wondering, I would've made just as much fun of the board poster had he been an Auburn fan, Tech fan, Tennessee fan, or whatever else (except Georgia fan, in which case I would be either denying his existence or desperately trying to prove he was a Techie in disguise).

I hear Sean Patrick Flannery has a mean hook shot.

Seriously, cultural diversity? That settles it..... the next dream team from the US will be an English chef, a South African diamond hunter, a Russian priest, a Japanese rock star, and a drunk irishman whose job it is to yell and flail his arms around in grandiose fashion. (Now that I think about it, that qualifies most American Basketball coaches.)