(Inspired by stuff posted at Georgia Sports Blog and Every Day Should Be Saturday.) 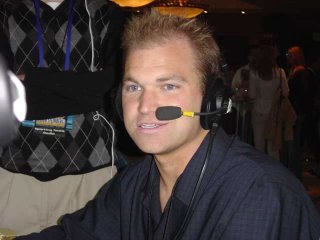 January 9, 1981: Casey James Clausen is born in Northridge, California, after 39 hours of labor. The Clausen child later says he could've popped out in under 24, but his mom didn't push hard enough.

June 29, 1982: Rick Clausen is born in Thousand Oaks, California. Doctors later inform the baby's anguished parents that their son will never have a full head of hair. 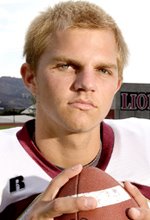 September 1987: Jimmy Clausen is born in Thousand Oaks, California. Doctors are shocked to deliver a newborn that not only has a full head of hair, but whose hair is full of a substance later found out to be Alberto VO5 hair gel.

September 23, 2000: Casey Clausen plays his first game for the Tennessee Volunteers, going 12-of-15 for 133 yards and three touchdowns in a surprise 70-3 win over juggernaut Louisiana-Monroe. Though only a freshman, Clausen takes it upon himself to launch the "Clausen for Heisman" campaign immediately following the game by staying up all night making photocopies at the UT student center.

October 7, 2000: Just two weeks after his UL-Monroe triumph, Clausen struggles mightily through a 5-of-11, 40-yard, 1-INT performance against the Georgia Bulldogs; it is Georgia's first win over Tennessee in a decade. A furious Clausen vows revenge.

October 6, 2001: Clausen goes 24-of-40 for 295 yards, 2 TDs and a pick but still loses to the Georgia Bulldogs and their true-freshman QB David Greene, Georgia's first win at Tennessee since the Herschel Walker era. A furious Clausen vows revenge.

December 8, 2001: Near-certain triumph turns to heartbreak as horrible irony threatens to rend the Clausen family in twain. With Casey Clausen at the helm, Tennessee takes a 17-10 lead over LSU in the SEC championship game, but the plucky-underdog LSU Tigers -- who count true freshman Rick Clausen among their number -- upset the Vols 31-20. Rick Clausen will be the only member of the Clausen family to ever earn an SEC championship ring.

December 22, 2001: Police are called to the Clausen family's California home to break up a domestic dispute between Rick and Casey. Rick apparently caught Casey wearing his SEC ring, and when Casey refused to take it off, insisting he needed more time to pose before his bedroom mirror, a fracas ensued. Rick later declines to press charges, but the bad blood continues to simmer.

October 12, 2002: Having suffered an injured shoulder the previous week against Arkansas, Casey Clausen can only sit on the sidelines and watch as his Tennessee Volunteers fall to the Bulldogs a third straight time, 18-13. Afterward, Clausen announces, "If I'd played in that game, we would have won by at least a couple of touchdowns . . . I could have played on one arm and we probably could have definitely beat Georgia."

February 2003: After once again spying Casey wearing his SEC championship ring, Rick Clausen transfers to Tennessee so that he can keep tabs on his older brother full-time. 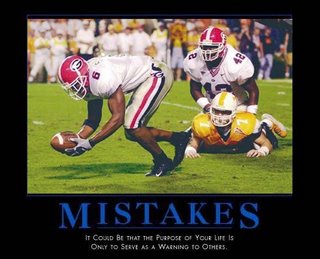 October 11, 2003: Trailing the Georgia Bulldogs 13-7, Casey Clausen is preparing to hand off just seconds before halftime when he fumbles, with both arms, near the goal line; Georgia safety Sean Jones picks up the ball and races 92 yards for a game-changing touchdown. Clausen proceeds to throw two interceptions in the third quarter, both of which are turned into touchdowns, as Georgia rolls to a 41-14 win, Tennessee's worst home defeat in nearly a decade. A furious Clausen vows revenge, then remembers that he will be graduating the following spring and will not be able to play Georgia again.

April 25, 2004: The 2004 NFL draft passes without a single team selecting Casey Clausen. He is signed as an undrafted free agent the next day by the Kansas City Chiefs, but a sheepish Lynn Stiles, the Chiefs' vice president of football operations, later admits that they thought they were actually drafting Rick. "I mean, that guy's got an SEC championship ring," Stiles explains.

August 31, 2004: Casey Clausen is waived by the Kansas City Chiefs.

August 5, 2005: Casey takes a position as a graduate assistant with the Mississippi State football team. Of the many news stories on this hiring, close to 99 percent go out of their way to mention Casey's little brother Jimmy as one of the nation's hottest high-school QB prospects. 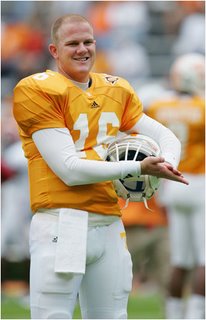 October 8, 2005: Rick Clausen fails in his attempt to avenge his older brother's three losses to the Georgia Bulldogs as the Vols lose at home to the Dawgs a third straight time, 27-14. 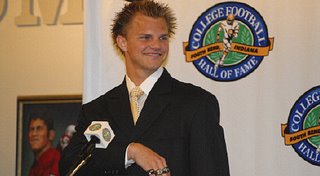 April 22, 2006: Jimmy Clausen, who has not played a single down of college football, steps out of a white Hummer stretch limousine at the College Football Hall of Fame in South Bend, Indiana, to announce that he will be signing with Notre Dame. Attendees are alarmed at Clausen's physical condition, fearing he had either stuck his tongue in an electric socket or been assaulted by a roving gang of gay hairdressers, but are nevertheless elated at the announcement.

April 25, 2006: Georgia, Florida, and other college-football fans around the country look at each other, make the jerk-off gesture with their hands, and snicker.
Posted by Astronaut Mike Dexter at 9:10 PM

And while we are on the subject of poor sportsmanship, what is the Clausen family record against West Virginia?

To the best of my knowledge, they are currently winless against the Mountaineers.

Is it too early to call Clausen's hair do "The Lisa Simpson" ?

It appears to me they are undefeated against the Mountaineers. I bet alot of people are envious of that record...

I suppose we could be envious, Bill. But then we stop, take a deep breath, compare our loss to WVU in a BCS bowl game to this and end up feeling much better.

Yep, its a shame when one Tennessee team loses to another, but what do ya do? Heck it took them 22 years and the best SEC QB since... well Peyton Manning, to do it.

Being as I am in Nashville now, I confess it was a bitter sweet win.

Nice ad at the top of the page btw,, at present it is an ad for a company selling UT football memorabilia..,,

I know you said you got the inspiration from EDSBS and GaSportsBlog but www.footballhuddle.net and I'm a Realist both had some good content on it. I linked your story to that thread at FH3, Good work on the time-line!

David Greene was a Redshirt freshman when he beat UT in 2001.

My favorite pass by a Clausen was on November 19, 2005 when Rick Clausen's final college pass ends up in the hands of a Vanderbilt DB to preserve a 28-24 victory.

I do not recommend reading the following line while eating a cheese cracker with peanut butter:

but whose hair is full of a substance later found out to be Alberto VO5 hair gel.

Laughing that hard with that kind of food in your mouth is quite painful. And you've really hit it on the head: I don't think there is anyone who knows the Clausens like SEC fans do who is actually scared of the idea of Jimmy quarterbacking ND. As someone who can't stand ND, I'm rather enjoying this prospect. Looks like another Dan Kendra, without the muscles.

I played High School Ball with the Clausens and may I just say, back in high school they thought they were the shit, now they just look like shit..I mean how much more ugly can they get, I mean I may be chubby but at least I'm cute...peace out Clausens

Dear God, to think I used to date Casey in high school. I'm glad I came to my senses. As we can see Jimmy is living up to the rest of his family.

Does anyone know what Rick and Casey are doing these days?

I guess it's good for UT that Casey isn't there any more, right? I mean hasn't Georgia gotten their asses kicked by UT the past two years?