· A week ago I got to meet blogger T. Kyle King, whom I'd never met before, in person, but that was a pre-arranged (in the loosest sense of the word) meeting. On Friday I met a fellow blogger completely by chance, and she just happens to be a frequent commenter here -- and Blue Gal deserves props for two other reasons besides that: One, she showed up at the weekly angry liberals' lunch set up by members of the Over the Mountain Democrats, and two, she has the courage to be a bleeding-heart liberal in deepest, darkest Shelby County. Oh, and here's a third reason -- she was nice to me in spite of the fact that I've been neglecting to frickin' link her all this time. My apologies -- I honestly thought I had a link on here someplace, but I am an idiot savant, and my HTML skills belong in the "idiot" part of that description. To make amends, Blue Gal gets official Friend Of Hey Jenny Slater status, with the traditional $45 fee waived.

· I would just like to say I'm really glad Delta isn't going bankrupt (yet). I just hope they've learned their lesson about throwing monstrous salaries at CEOs who apparently can't find their asses with both hands and a map. (If they have learned this lesson, maybe they'd like to share it with the Bush administration.) 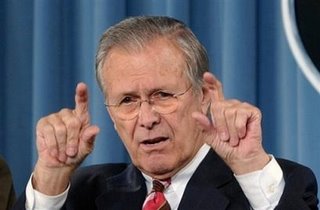 Above, Rumsfeld does his killer Robert McNamara impression . . . oh, wait, he's been doing that for five years now.

· Speaking of successful dealmaking, this is absolutely my new favorite game show, to the point where I managed to get my entire family hooked on it in the course of a single evening. For a concept so diabolically simple, it gets quite exciting in the later rounds; experience it for yourself, or just waste some valuable time at work, here. (And since I know you care, my favorite model is a tie between Anya and Lanisha.) 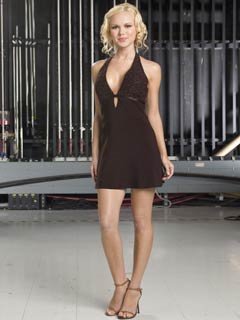 Not Slovak, but she'll do.

· EDSBS and Paul Westerdawg both brought news this past week of a new Birmingham-based college bowl game that could start as early as next year -- assuming that the NCAA doesn't look at Birmingham's lengthy history of failed bowl games, pro-football franchises, and what and have you and decide that they'd be better off just wiping their asses with $1.5 million in crisp hundreds and flushing them down the toilet. In response to Westerdawg's question, yes, Legion Field does have a working upper deck, but only on the west side of the stadium. They had to take down the one on the east side because it was, uh, structurally unsound (as opposed to the rest of the stadium, which is merely aesthetically unsound). However, this does have the unintended bonuses of 1) offering a nice view of the B'ham skyline at night and 2) making otherwise sparsely attended games appear more crowded. Anyway, it's no worse an idea than the fricking Humanitarian Bowl or whatever they're calling it these days.

· Madame Tussaud's added a new wax figure of Lindsay Lohan last week -- or thought they did, until the wax-figure factory accidentally sent Stockard Channing instead. 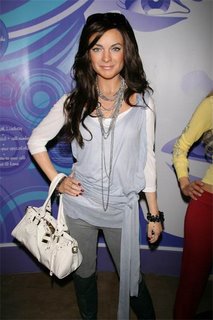 I can practically hear her henpecking President Jed Bartlet already!

· As for celebrities worth actually giving a shit about (and who don't make Jessica Simpson cry), Sean Connery is rumored to have a cameo in "Casino Royale," the next Bond film due out this November. I'd always thought it would be really cool for a Bond movie to one day feature Connery as the Big Villain, but this is the next best thing, I guess. Though I'm finding myself hoping that Connery's "Casino Royale" character is a drunk gambler who causes a commotion by asking the baccarat dealer for "'The Rapists' for four hundred" and, when summarily rebuffed, calls the dealer a "beef-witted applejohn." 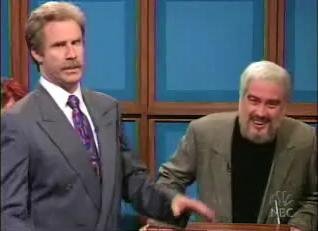 I don't know what diabolical plot the actual villain of "Casino Royale" has up his sleeve, but I hope it doesn't affect Jap-Anus relations.

· Still, my Dirty Little Secret of '06 (besides the fact that I heart figure skating is the fact that "Casino Royale" is probably only my number-two most anticipated movie of the year. The number-one movie, the movie I'm looking forward to more eagerly than any other, the one I'm most likely to be camped out in front of the theatre for days in advance of the actual release date, is . . . this.
Posted by Astronaut Mike Dexter at 8:04 AM

Looking forward to "Cars" is no cause for shame.

I happen to be a big fan of Harry Crews's novels, myself, and I look forward to this motion picture adaptation of the "grit lit" author's early work.

Wait a minute . . . it's a cartoon featuring all those annoying automobiles from the Chevron commercials? Dude, get help!

Stop. You had me at "get the turkey reuben, I hear it's good." You can wave my fees anytime, babe.

dude, it's got cheech marin in it! I'm SO there...or I'm SO on my couch with the DVD because going to the theatre with an infant (currently 4.5 months) is akin to descending into the 7th circle of hell.

Did you read the SI article? They're considering Birmingham, New Mexico and Toronto for a December 28th game? Because nothing makes me want to go to a football game like below-freezing temperatures in December in Toronto. I hate the cold weather games (indoor or not). Who wants to go to Detroit in December?