Bloggerpawhatever '06: A good time was had by all four.

By now you may have read an inaccurate and, quite frankly, bizarre post by Kyle King purporting to describe the events of our attempt to throw a bloggers' tailgate before the G-Day game last Saturday in Athens. For reasons I cannot attempt to explain, Kyle elected to post a pack of scurrilous lies rather than the truth, which is as follows:

Yes, the weather Saturday morning started out terrible. Yes, our group was small in numbers at first. But while my sister, Kyle, his brother-in-law Travis and I were huddling by the Arch underneath our umbrellas, wondering what to do, none other than Rammer Jammer Yellow Hammer author Warren St. John showed up. Warren had been extended an invitation to participate, but we hadn't known for sure whether he would show until he pulled up in his massive RV on Broad Street, asking us where we were planning on setting up. We all hopped into the RV and drove around looking for a spot, and who did we see standing on the corner of Broad and Jackson but "College Gameday" fan favorite Kirk Herbstreit. Kirk, it turns out, was in town working on an in-depth piece about Georgia's quarterback race, and he accepted our invitation to climb aboard the RV and join the tailgate. 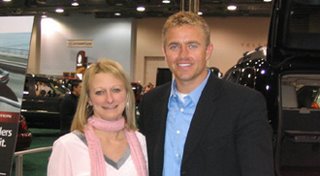 Herbstreit and his producer, Denise Petrella, post-game at the Georgia Center for Continuing Education.

Since no buses were running on Saturday, we eventually parked the RV in a bus-stop cutout on Jackson Street, right by the main library, and set up our grill, drinks, and other stuff in the bus shelter. We were all set to pop open the champagne Ann and I had brought when UGA's finest pulled up in a Crown Victoria black-and-white, blue lights blazing; we began packing up our tailgate stuff, figuring we were sure to be kicked out of the bus stop, but the cop recognized Herbstreit and started chatting him up about football. Without even having to be asked, Herbstreit hooked the guy up with an autograph, and we were good to go. "If anyone else comes by here wondering what you're doing, just say you cleared it with me," said the officer, whose name I won't reveal here, and he sped off.

So that was awesome enough. But incredibly, it got even better. Just as the rain began to taper off for good, and we started moving our tailgate stuff out into the sunshine, a group of at least a dozen Kappa Deltas from UGA came trudging down toward Jackson Street from the north campus quad. They'd been stood up by the TKEs they were supposed to be tailgating with, they were soaking wet, and they were pissed -- but when they saw Herbstreit (the man is a pimp), their faces just lit up, and we invited them to tailgate with us. We hung out there for about an hour and a half, drinking and eating, talking football, and then headed down to the game. Oh, and I got not one, not two, but three KD phone numbers. It was, needless to say, an awesome morning. 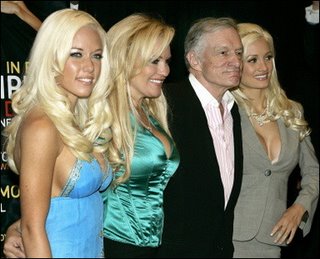 Me with the three KDs who hooked me up with their digits. (I Photoshopped Hugh Hefner's head over mine as a joke, like.)

After the game, Ann and I took Kirk to Five Star Day for a late lunch, and it turned out to be one of the most fortuitous meals I've ever had. Kirk told me that ESPN was taking a big hit among the college-football fan base for some of their programming decisions over the previous football season -- their overemphasis on USC being just one -- and were looking for ways to counteract that. He asked me if I'd be interested in making Hey Jenny Slater an all-college-football blog and having it hosted on ESPN.com as an official ESPN feature. How could I say no?

So all in all, a thoroughly awesome day. Why Kyle chose to omit all of this, just so he could promote his own utterly false account, I have no idea.

Well, no, I do have an idea -- Bloggerpalooza '06 was, for lack of a better word, a bust, due to two primary factors: 1) the horrendous weather, and 2) Yours Truly's contingency planning for the tailgate, which proved to be about as thorough and well-thought-out as the Bush administration's post-invasion strategy for Iraq (which is to say, shitty). You'd think that for an event like this, having, say, a backup plan in case of a torrential downpour, or at the very least a list of potential participants' phone numbers so that people can at least get in touch with each other, would be a good idea, right? Well, I didn't think of any of that. So anyway, it ended up being me, Ann, Kyle, and Travis in the North Campus Parking Deck, pounding fried chicken and Krispy Kremes like it was our job. My apologies to anyone who came looking for us at the Arch and never found us; I did make every effort to wait out there for the stragglers, and nearly got busted three separate times for illegal parking in the process. (Possibly by the same cop, who probably thinks I'm an al-Qaeda sleeper agent by now.)

Still, we enjoyed finally getting to meet each other, stayed dry during the actual game, and actually did have a pretty fun day. I'll have my thoughts on the game itself later on today; I'll have photos whenever I get my camera back, which I left at Ann's apartment on Sunday.

And I promise I'll do a better job of prior planning next year. Or, hell, maybe we won't even have to wait that long. Georgia's baseball team plays the rubber match of its series with Georgia Tech at Turner Field on Wednesday, May 10, at 7 p.m. . . . what do you think, sirs?
Posted by Astronaut Mike Dexter at 1:42 PM

I'm in for any Tech-hatin' action.

When that weather system came thru here it killed 11 people and destroyed countless homes and businesses. Vol State Community College is closed as a good chunk of it is destroyed. Churches are meeting in what's left of school gyms because the their church buildings are best described as a pile of scrap lumber. The Red Cross has set up shelters, and what's left of the National Guard that isn't in Iraq has been mobilized. Gallatin looks like Hiroshima in places. No sign of FEMA yet, although they may be there now (I haven't heard and usually after tornadoes I do,,, not saying they aren't here, but I ain't seen 'em.) I am south of town and this all took place about 20 miles to the northeast. My old bass player lives about 20 miles south of me and his home was spared, although at one point he was bracketed on 3 sides by tornados.

"Sorry you had rain."

Shit. Me and Dawgnoxious saw you guys. I wasn't sure it was you, but Kyle said you were wearing a Red Sweater vest. If that was you in flip flops, then we saw you. It was around 11:00 or so and we were walking to the stadium past the law library.

Anyway....I was like...Is that Doug? Dawgnoxious said..."heck man I don't know his pic is only 1 inch wide on his site."

That is truly tragic and I send my best for those affected by the storm.

Having said that, don't you have anything better to do?

Bill, I'm sorry to hear about the devastation in your area. I hope you know you weren't trying to make light of genuine tragedy while grousing about our own inconvenience, which was minor in any case and pales to insignificance in light of what your region has experienced.

Paul, that was us. Doug was stylin' and profilin' in a red sweater vest and natty flip flops. We crossed paths and never even knew it.

Uh . . . that should have been "I hope you know we weren't trying to make light."

Yup, that was me in the sweater vest, which I have worn exactly twice: The first time Georgia got cockpunched in the Sugar Bowl, the second time our tailgate gets rained out. I'm starting to think this sucker's cursed.

Bill, I heard there was some heavy damage up in Tennessee, but I had no idea it was as bad as what you described. Y'all will be in my prayers tonight.

Appreciate that. My family and I, as well as Brooks if you ever see my page, were in areas relatively uneffected. Either side of us got the living shit kicked out of them though. We had hail and wind but no damage here on the south (where I live) and east (Brook). To the north and further south was aweful... I drove down towards Columbia today to check on folks down there, and all I knew were blessed to come thru unscathed. They still won't let ya into Gallitin, or at least parts of it.

Please pray for those effected, not me. The only inconvience I had was watching the news radar all day (well from 2 until midnight) to see if I needed to get my butt to the basement.
And by no means did I think anyone was making light of it, no worries there. I really did hate you got rained on and I hope it does not leave the Dawgs less prepared for the SEC this year. (althought I expect Coach Fulmer will have my Vols competitive again this year so I don't want the Dawgs that ready....)

I guess what I was trying to say in my earlier comment was that storm was in fact a bitch, and as I understand it spawned 4 tornados as far away as Georgia the next morning. I never meant to infer that you were somehow making light of the destruction it caused.

Hey, thanks for the prayers and if you can spare some cash, or blood, think of the Red Cross. They were setting up shelters when the storms were still coming in.

Not sure what you mean by me having something better to do though.

Interesting story from the local news Friday night; one of the hardest hit areas was a subdivision in Gallatin. A couple was there with their realtor looking to buy a home to relocate to, as they had decided to move to Nashville, from New Orleans. They were not harmed apparently, but the home they were going to look at was destroyed. I am pretty sure they didn't make an offer....