Girls who are boys who like boys to be girls who do boys like they're girls who . . . 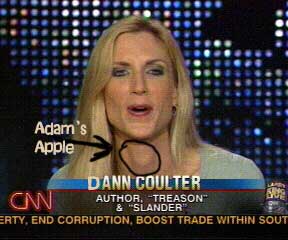 Nope, still wouldn't do him.

In spite of her radically conservative leanings -- which would lead one to think that she's in favor of as small and streamlined a government as possible -- Ann Coulter has been doing everything in her power to gum up the wheels of bureuacracy lately. First she voted in the wrong precinct in a February election in Florida, claiming to live at an address currently being occupied by someone else. Now, courtesy of Matt Lavine, we get news that Coulter neglected to answer question number 15 on her Palm Beach County voter-registration form, an odd omission given the simplicity of the question -- it simply asks the gender of the prospective voter.

Even once you get past the "Ergh, I wouldn't want to check her box, either" jokes I'm sure some of y'all are already making, this is worth at least a chuckle, given how many lefties (including Yours Truly) have made snarky comments about Coulter's, er, somewhat mannish appearance. But as you dig deeper, the plot thickens. There's a long-standing controversy over the issue of Coulter's age -- while living in Washington, D.C., a few years ago, Coulter obtained a D.C. driver's license listing her birthday as December 8, 1963, while a previous license she had used in her home state of Connecticut listed her birthday as December 8, 1961.

OK, tinfoil-hat conspiracy time. Let's say, just as a "what-if," that Ann Coulter was actually born a man in 1961. But as this young boy -- we'll call him "Andy," just for poops and giggles -- grows up and matures (in a physical sense, if not an emotional one), he decides that, man! he feels like a woman, and upon turning 18, decides to get a sex change before he heads off to Cornell. He gets transgendered, forms a new identity for him/herself, and over the course of fashioning this new identity as "Ann," decides, you know what? Why not just lop two years off her age in the process, just to feel a little younger and stave off that 40th-birthday milestone for a couple more years.

As the linked Washington Post article (from 2002) mentions, Coulter "frequently scorches hapless reporters who dare write that she's no longer in her thirties," which would seem to indicate that this is a touchy subject for her. And strangely for a woman -- well, a normal, well-adjusted woman, at least -- Ann Coulter seems to hate women. She's repeatedly said women are "not that bright," told Bill Maher that "women have no capacity to understand how money is earned," and has suggested on more than one occasion that women shouldn't have the right to vote. So we know that not only is Coulter's past a little muddled, not only is she cagey about revealing her gender, but she also appears to dislike, or at the very least seem rather keen on distancing herself from, other women.

Email ThisBlogThis!Share to TwitterShare to FacebookShare to Pinterest
Labels: miscellaneous stupidity, politics, you know what I blame this on the breakdown of? society

I just want to go on record about something right now: Ann Coulter went to Michigan's law school, and there is no greater embarrassment for the University than that. Not even this guy:
http://www.mgoblue.com/coach_bio.cfm?bio_id=308&section_id=257⊤=2&level=3

Always should be someone you really loooooooovvvve

If she's really a man, is it still okay to call her a bitch?

Ann is a better looking man than Hilary Clinton, whatever it is?