The NFL draft is coming up next weekend, and the punditry is a-flyin'. Earlier this week Paul Westerdawg gave his endorsement to an AJC column by Terrence Moore questioning why, if the University of Georgia consistently pumps out so much top-notch NFL talent, the Atlanta Falcons don't draft more Bulldogs. (Moore restrained himself from proposing that this was due to some kind of racism on the Falcons' part, which is amazing enough by itself.) A few days later, fellow Dawgblogger (and Bloggerpalooza diehard) T. Kyle King basically said he was fine with the situation because, well, he wouldn't wish the Falcons on anyone, much less a Bulldog.

I can't argue with too much of what Mayor King said, because, well, clearly the Falcons have their problems. Given that they've never had back-to-back winning seasons in the going-on-40-year history of the franchise, consistency and maintaining momentum would seem to be chief among those. But "the most futile franchise in all of professional sports"? Mmmm . . . I don't know about that. Certainly the case for über-futility could have been made throughout most of the '80s and '90s -- from 1981 to 1997, they went 98-165-1 and had only three winning seasons, one of which was the strike-shortened '82 campaign. But since then they've gone 63-64-1 (OK, still below .500, but a whole lot better), gotten into the playoffs three times (earning a 4-3 postseason record), and managed to draft (and hold on to) one of the most exciting (and most popular) players in the league. Michael Vick may not be Brett Favre, but the fact that the Falcons have managed not to fuck things up and lose Vick the way they lost Favre. Faint praise, yes, but . . . well, they're learning.

Anyway, this started out as a comment on T. Kyle's blog but I decided it needed to be a whole post, because if you're looking for historic professional-sports futility, you can do much, much worse than the Falcons. Here are some franchises that make the Dirty Birds look like the Ruth-era Yankees: 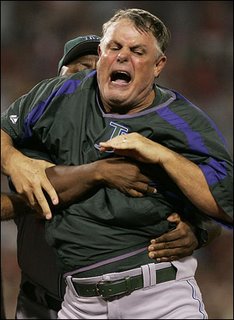 The Tampa Bay Devil Rays. It may sound unfair to pick on one of major-league baseball's newest teams, but the modern-day MLB environment is such that a team can go from expansion franchise to surprise World Series winner in just five years, so the D-Rays (est. 1998) have had more than enough time to at least become competitive. But not only have the Rays never finished a season above .500, they've only finished four of their eight seasons above .400. Only once have they finished a season anywhere other than 5th out of five in the AL East (in 2004, they finished 4th), and in the history of the franchise, they've only gotten to spend 59 total days with a winning record. Plus, as my homey Larry once pointed out, their logo is the straight-up cheese. 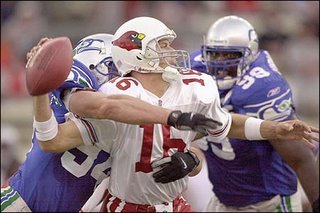 The Arizona Cardinals. The Cards have logged the same number of winning seasons in the past 40 years as the Falcons have -- 10 -- but it's a matter of which direction the teams appear to be moving in. Since moving to sexy, saucy Phoenix in 1988, the Cardinals have had only one winning season (1998, also the year of their only playoff appearance) and have barely even sniffed .500 since then. Outside of that '98 campaign, they've had only seven seasons in which either their offense or defense managed to so much as finish in the top half of the league, yardage-wise. People in Atlanta love to talk about what a lousy franchise the Falcons are, but I doubt that even one of them would trade with the folks in Arizona if given the opportunity. 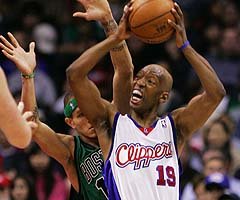 The Los Angeles Clippers. Thirty-five years, six playoff appearances, five winning seasons, 'nuff said. To put it another way, they're even worse than the godawful Atlanta Hawks. In 21 years in L.A., they've only finished higher than fourth place in the Pacific Division twice. 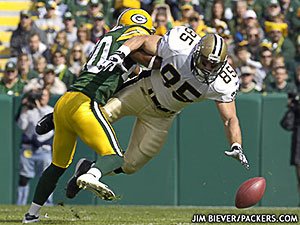 The New Orleans Saints. I hate to pile on a team that didn't get to play a single home game last season, but the Saints' history of rampant suckage dates back long before they had Hurricane Katrina to blame their problems on. The Saints came into existence one year after the Falcons did (1967), but while the Falcons had worked their way up to a winning record by 1971, the Ain'ts didn't finish above .500 until the 21st year of their franchise. They did go through a brief period of competitiveness in the late '80s and early '90s, finishing at .500 or better in seven of Jim Mora Sr.'s 11 seasons as head coach, but it's been mostly futility since, and ex-coach Jim Haslett's unique ability to finish at 8-8 has been about the biggest thing they've had to hang their hats on in the past few years. They're one of only five teams in the NFL to have never gone to a Super Bowl, and that will probably still be an accurate statement this time next year (at which point, I'll bet cash money, they will be called the Los Angeles Saints). On the other hand, they did spawn Mora's famous "diddly-poo" tirade back in 1996, which is more entertaining than most of what the Falcons have accomplished in the last 40 years. 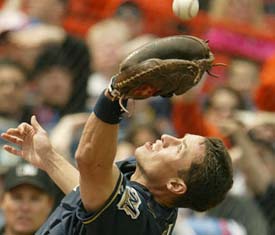 The Milwaukee Brewers. You'd think that a team owned by the freakin' commissioner of major-league baseball might somehow find a way to not suck, but the statistics don't lie: The Brewers have been around for going on 38 seasons now and have only made the playoffs twice, and only have 10 winning seasons to their credit (plus two seasons finished at exactly .500, if that's the kind of thing that blows your skirt up). Given how utterly devoid of high-profile achievement (or players) this team has been in the last 38 years, I'd be willing to bet there were plenty of people who came out of the movie "Mr. 3000" thinking the Brewers were a fictional team. Of course, in my more vindictive moments, I'd say this kind of apathy is precisely what Bud Selig deserves.

So that's at least five pro franchises I'd have to say are notably worse overall than the Falcons, and that's not even counting pro hockey or soccer, which I know dick about. (If you're up on either of those sports and want to throw in some nominees of your own in the comments thread, feel free.)

All this aside, however, there is one thing that T. Kyle and I can agree wholeheartedly on, and that is that the Georgia gymnastics team -- who won the national title and capped off a perfect 36-0 season Friday night -- is fudging awesome. If we're talking about barometers of success for athletic teams, then seven national titles, 28 individual championships (including four individual all-around champions) and 15 SEC titles would seem to be pretty unassailable by anyone's standards. Previously Paul Westerdawg had implied that Gym Dawgs head coach Suzanne Yoculan might be the Steve Spurrier of college gymnastics, but T. Kyle says he might have been mistaken -- why not just call her the Bear Bryant? Works for me. 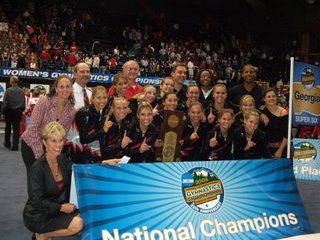 ADDED: As long as I'm giving mad props to Georgia people, please for you to be welcoming Dodgy at Best, the sports blog of fellow Dawg fan Kanu, to the blogroll. And if you're a diehard Georgia fan with an iPod, do not hesitate to follow his link to the Larry Munson Web site and start downloading Munson's classic calls like there's no tomorrow.
Posted by Astronaut Mike Dexter at 12:44 PM

Yes! Someone who supports my opinion of teh Brewers major suckage, and Bud Selig's general smarmy incompetency.

Bud Selig would have made Brownie look good. Commish my ass. He fought a downtown stadium because now, all the parking revenue goes directly to the Owners. Not the Team, the Owners.

The Brewers suck so bad they broke their fancy-pants folding roof the second year it was operational. 10 million to fix. No money left for players.


Pfaggh. Brewers my hairy butt pimples. I think we should have built a FOOTBALL stadium, lured the Bears here, and twice a year we would have had a massive Packers-Bears rivalry blowoout/civil disruption. Brings all the Illinois money up here north of the border, and the destruction would allow us to build bright shiny new buildings.

Jeez, don't forget the Columbus Blue Jackets. They've never been good. But they still pack the house every night, because, well, it's Columbus.