As an airplane geek, I am now insanely jealous.

When I first read that someone was turning an old Boeing 747 into a house, I was extremely envious. As it turns out, the project isn't quite as cool as I first thought it was -- they're not just taking an old 747 fuselage and plopping it down on someone's property, they're taking they thing apart and building a house out of the parts. And the rough computer rendering of the house design doesn't show a lot of recognizable 747 design touches in the final product. Still, though, it qualifies as "awesome" in my book. I've never actually flown on one, but the 747 has still been my favorite plane ever since I was a little kid.

But if I'm ever gonna do this myself, I guess I'm gonna have to build my house out of an even bigger airplane to top this first one. The logical choice is an Airbus A380, but those haven't even entered regular commercial service yet, much less completed their life spans and been scrapped -- besides, I want a good ol' American airplane, not some hoity-toity European plane. The Boeing C-17 would be the logical choice, then, but again, it's gonna be a while before the Air Force starts getting rid of those. How about a C-5 Galaxy? It's big, it's spacious, and plus, I hear the Air Force has an airframe they might be looking to unload sometime in the very near future. What do you think, sirs? 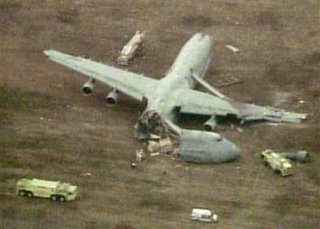 Look, it's even pre-broken-up and everything! I think I'll put my bedroom in the cockpit.
Posted by Astronaut Mike Dexter at 3:35 PM

Email ThisBlogThis!Share to TwitterShare to FacebookShare to Pinterest
Labels: airplanes

Was that a reference to Mystery Science Theater 3000 or am I just too geeky?

You may or may not be too geeky, but if you are then I am too, because yes, it was.