Football in April? Why, that's like Christmas in . . . well, April.

As promised, here's my rundown on the G-Day game. While we were sitting there in the stands watching the proceedings, Kyle, Travis, Ann and I discussed at length the ramifications of watching some guys from your own team play some other guys from your own team, and the paradox that results when someone makes a really terrific play. Like, does that mean that the guy who just scored is really good, or that the guy who was supposed to cover him is just really bad? I don't know enough to make too many judgments on all that, but here's what I saw: 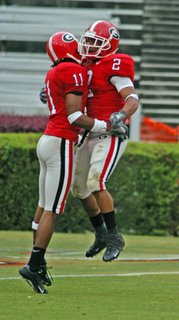 The Good: Tradition holds that after the conclusion of the G-Day game, the winning team gets steak and lobster, while the losing team has to make do with franks and beans. This year, though, they might've done well to just give out steak and lobster to anyone who played on defense, who were almost uniformly terrific. The Red team, who won 14-10, scored all their points on interception returns -- an 80-yarder from Ramarcus Brown and a 100-something-yarder out of the end zone from Asher Allen -- and while I certainly wouldn't expect the Dawgs' opponents this year to throw nearly as many interceptions as our QBs did on Saturday (more on that later), I still think our secondary is going to be in good hands (Paul Oliver being yet another potential superstar). There was also some terrific work from linemen Kade Weston and Charles Johnson, who had two sacks apiece; I read a description of Johnson as "a man among boys" the other day, but that's not quite accurate. Take all the men in the world who could be described as "men among boys," and Johnson would be a man among those men. Or a titan among men, let's say. Having him and the great Quentin Moses at DE this season is going to be immense fun to watch; I look forward to the Gigantic D-Line Pincers of Death pureeing many an opposing QB.

And while the offense wasn't quite as inspiring, as the final score would tend to indicate, there were some bright spots, one of the most obvious being OMG hott QB Matt Stafford. If your very first pass culminates in a 64-yard touchdown, either you're pretty talented, the coaching staff has plenty of confidence in you, or both, and that can't hurt. Kregg Lumpkin broke off some impressive runs, as did Jason Johnson, and Tripp Chandler, with 98 yards on the day, took a pretty good swipe at becoming the next in Georgia's long line of elite-level tight ends. 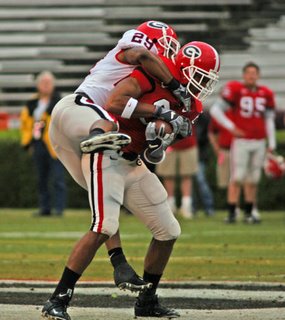 The Bad: Well, Matt Stafford may have put in a wow performance, but the same cannot be said for his chief competitors for the starting job. Joe Tereshinski, lord love 'im, just never got into much of a rhythm, and completed as many passes to the opposing team (two) as he did to his own; Joe Cox probably moved the ball more consistently than any of the others, but he killed drive after drive with ill-timed picks. The AJC's Bulldog fanblogger, Bill King, had an interesting and somewhat less negative take on all this -- to wit, the altered rules for G-Day (if a defenseman so much as got a hand on a QB, it was considered a sack and the play was blown dead) likely incited Cox and Tereshinski to get rid of the ball earlier than they would have under normal game conditions. That makes some sense to me, but six picks (seven if you count one of Cox's that was mysteriously wiped off the books in weirdly Orwellian fashion) is still nothing to get excited about. Richt has been insisting that Tereshinski has been doing fine in practice, but this has still got to be considered a wide-open QB race. Neither Thomas Brown nor Danny Ware got much consistent production in their limited playing time, but Ware was probably the more disappointing of the two, spending too much time running east-west and not seeming to hit the hole with the kind of intensity he did when he was wowing fans as a true freshman in '04. 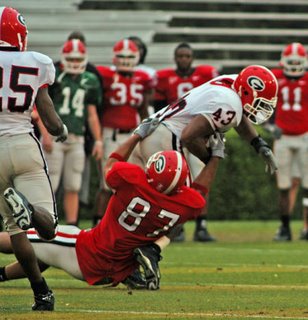 The Ugly: Aside from the tailgating weather, you mean? Well, the above picture pretty much sums it up. Martrez Milner (87) can be seen tackling somebody, which, given that Milner is a tight end, should be considered unusual; I don't know what the exact circumstances of this play were, but if the rest of Milner's performance Saturday is anything to go by, he was probably tackling the opposing DB who actually caught the ball after it whistled harmlessly through Milner's fingers. Martrez dropped at least two easily catchable passes in a fashion distressingly similar to that of the Dawgs' first play from scrimmage against Florida last season; he's gonna have to do better than that, particularly with fellow TE Chandler looking as good as he did. Then again, it's not like Milner was the only one doing a good impression of someone who'd just plunged his hands into a tub of Crisco. A fellow sitting behind us summed it up best: "Might be time for Eason to haul out the tennis-ball machine again."

And then there was the first extra-point try of the game, in which Asher Allen got a little excited, forgot the no-contact-on-the-kicker rule, and nailed Andy Bailey hard enough to put Bailey writhing on the ground for a few moments. I mean, Bailey's not our starting PK, but still. I hope Allen was kind enough to switch meals with him that evening.

The Verdict: Well, again, you can't tell much from an arbitrary setting like this, but it still seems pretty clear that nobody's exactly busted out in the QB race yet. Based on what I'm hearing from Athens, Tereshinski is still the most likely to get the starting job come September, but between his reputation and his obvious talent, Stafford could really push him, and if he shines in some of the Dawgs' early gimme games, look out. I'm still hoping Lumpkin gets a chance to be the Dawgs' number-one ball carrier, and I'm looking forward to seeing if Chandler can perform as well in an actual game setting as he did on Saturday.

And the defense? Well, they fittin'a ride on some bitches. Goes without saying.

Other takes are available from fellow Bloggerpalooza diehard Kyle King and Paul Westerdawg at Georgia Sports, who are also kind enough to offer huzzahs for the Gym Dogs, who posterized the competition in their regional meet and are still #1 with an armor-piercing hollow-point bullet going into the national finals. Two straight national titles? As the Magic 8-Ball would say, signs point to yes. 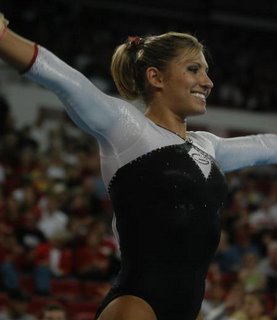 Or as Paris Hilton would say: That's hott. Championships start a week from Thursday.
Posted by Astronaut Mike Dexter at 9:54 PM

I too love the Gym Dogs. In grad school 97-98 I worked in the athletic department, and for Gymnastics meets I got to sit down on the floor on at the press/officials tables. Best seat in the house I assure you. Well, except for my classmate, who was an assistant trainer for the Gym Dogs. I guess he had an even better "view".