Well, we already know he looks good in red and black . . . 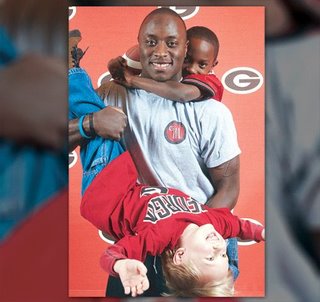 Don't know why it took seven rounds to happen, but the Falcons finally responded to the Dawg blogosphere's bitching about their never drafting UGA players. D.J. Shockley will be staying close to home and making two things happen for the Falcons:

1) They now have a backup who can take over for Michael Vick, should the need ever arise, with a minimum of playbook-altering.

2) They may be the first team in NFL history whose seventh-round draft pick's jersey outsells that of a guy who was a #1 overall pick -- in their home city, at least.

Obviously I'm indulging in a wee bit of hyperbole here, but congrats to Shock and congrats to the Falcons. Rest assured I will be checking this site with regularity for when the new #3 (or #4, or #5, or whatever) goes up.

So fucking pumped right now. Glad the Falctons took the time to look at DJ and did the right thing and spent a pick on him. He deserves any good things that happened to him and I can only hope he gets a chance to prove himself sometime in the NFL.