Bowl dreams, Friday Random Ten, and the single greatest thing to have ever appeared on the Internets. 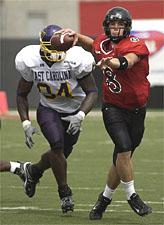 I suppose that, as a college football fan, there are any number of withering remarks I could make about Birmingham being one of the cities green-lighted to host a bowl game for the 2006-07 season. I could ask if ticketholders will be required to sign accidental-death-and-dismemberment waivers before entering Legion Field, which, as stadiums go, is starting to look ratty even compared to the UL-Lafayette home stadium where they had to move the New Orleans Bowl last December. I could also propose the question of just what precisely a Conference-USA-#6-vs.-Big-East-#5/#6 matchup is supposed to prove, other than which gutted mid-major conference has the softer midsection. But as a three-year (going on four) Birmingham resident, all I can say is We got a bowl game and -- unless you live in Memphis, Orlando, Atlanta, San Francisco, Miami, Nashville, Mobile, Shreveport, Phoenix, Las Vegas, San Antonio, Charlotte, Boise, Detroit, Tampa, San Diego, Fort Worth, Pasadena, Dallas, Honolulu, Tempe, Jacksonville, El Paso, New Orleans, Toronto, or Albuquerque -- you don't! So SUCK IT!!!!!111!1!one

Now all we need to decide on is a name -- I'm hearing that they're just going to call it "The Birmingham Bowl," which sounds pretty lame. Personally, I think we should tip our caps to the city's rich iron- and steelworking history and call it the "Iron Bowl." What, that's already been taken?

Well, I'll keep brainstorming and let you know what I come up with. Meanwhile, here's the Ten:

And that's pretty much it -- except for, as I promised, the single greatest thing to have ever appeared on the Internets. Which, via TBogg, Shakespeare's Sister, Fark.com and probably Kevin Bacon, is . . .

Sound is pretty NSFW for the most part, so pop in your headphones, turn up the volume, and repeat after me, bitch: I come in the name of the Lord.
Posted by Astronaut Mike Dexter at 8:08 AM

Considering it's Birmingham, I don't care what it is called as long as "Bowl" is misspelled. "Tha Burminghamm Bohl." Something like that.

And then, considering that it is Birmingham, we could call it the Iron Boil.