You've got your injury, Wildcats . . . now stand by for the insult.

To inject some excitement into a football program staggeringly incapable of providing it, Lexington, Ky., radio station WKQQ came up with a novel promotional scheme. They put up a billboard of comely on-air personality "Kitten," and promised to remove an article of her clothing for every game the Kentucky Wildcats won this season.

Now, since UK won a grand total of two games last season, you could say this didn't involve a lot of assumed risk on Kitten's part. But lo and behold, on September 10 the Wildcats came from behind to beat Idaho State -- the fact that they had to come from behind against Idaho State kind of gives you an idea of what we're dealing with here -- and off came Kitten's sweater. On October 29, they beat Mississippi State, and off came Kitten's shoes. And on November 12, the 'Cats went to Nashville and held on for what was actually quite a surprising upset against Vanderbilt. So . . . off with Kitten's T-shirt, right?

Yeah, baby! Except . . . well, no, baby. Fearing backlash from a conservative Southern community, the billboard company evidently balked, and Shirtless Billboard Kitten has been forced to "cover up" with a sign directing would-be viewers to the radio station's Web site.

"The billboard company is only looking out for the communities best interest, we completely understand and respect their concerns," said WKQQ Program Director Dennis Dillon, "but we made a pledge to the football team and we -- umm, they -- must be rewarded."

Good, upstanding fellow, that Dennis Dillon. Nevertheless, I can't help but still be a little peeved at the billboard company. In the first place, even a shirtless Kitten is probably no more risqué than any of those billboards you used to see on a regular basis featuring bikini-clad chicks enjoying a nice cold watery Coors Light. Secondly, being a Kentucky football player has to be a thankless task, and you'd think that this billboard company would have better things to do than deprive these guys of one of the few remaining joys of being a UK gridder. Well, besides having Ashley Judd at your games, and she's not shirtless. (That I know of -- if she was, hell, I'd go to their games.) 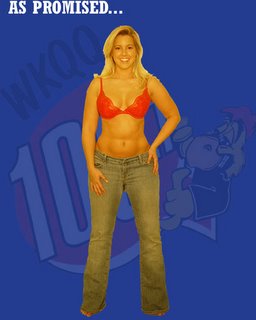 Anyway, here's the Web-only picture that was supposed to go up on the billboard. Saucy, yes, but hardly Western-civilization-toppling. You tell me if this is really all that censor-worthy.