To all y'alls who've been reading my football rambling and still can't quite understand just what a huge effect the fortunes of a football team can have on someone, check this out. Sunday night I had three nightmares, all of them involving disasters taking place either at or near Sanford Stadium. In the third and most vivid of those, my dad, sister, and I are at Sanford on a cruddy, overcast day about to watch the Bulldogs give the business to some supermarket-brand non-conference opponent. We're in our seats in the west end zone a few minutes before kickoff when we hear the sound of jet engines overhead, and we look up to see a Gulfstream private jet, black with gold stripes down the sides, streaking over the stadium. This isn't that unusual -- Sanford Stadium is right beneath the flight path of Athens-Ben Epps Airport, and at least a half-dozen planes went over during Saturday night's game -- but this one's flying way too low and everyone in the stadium knows it. In fact, the plane has actually dipped below the upper deck of the stadium and looks like it's about to nail sections 217 and 218 when the pilot pulls up at the last minute, but he pulls up too steep, the plane stalls, and it comes plummeting to earth over the back of the stadium, crashing in a huge fireball near Gate 7 on East Campus Drive. 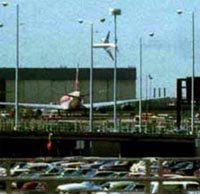 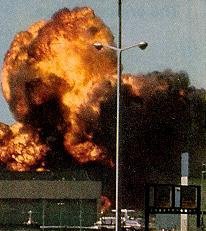 An aeronautical metaphor for Georgia's national-title hopes over the last three weeks.

Oh, well, no use doing any more crying over this particular spilled jug of milk. I guess I can take some small bit of consolation in this report of three guys getting arrested in Athens last Saturday for selling counterfeit tickets. Sadly, I don't think any of these guys are the specific anal wart who sold me my bogus ticket -- the story says they got tagged at 4:15 p.m., which would've been right before I made my fateful purchase, if memory serves. So I can only hope that my particular scalper took his ill-gotten gains to Techwood that night, picked up a cheap hooker, and came out of the encounter with an agonizing case of herpes. No, no, herpes isn't good enough for a guy like that. Syphilis. Yeah. That's what I'm talkin' about.
Posted by Astronaut Mike Dexter at 9:32 PM

The crew of counterfeit scalpers mentioned in the linked article could not have been your culprits. I can tell that you are far too experienced to buy a ticket bearing the words "Admit One" from a wily homeless dude.

Your dream reminds me of a weird anxiety dream I had recently in which a plane looking like a C-130 did a big loop-the-loop and then a tighter loop and a tighter loop until it smashed nose first into the ground. This was when UGA was undefeated so I don't know it's metaphorical significance. However, the jet in your dream was clearly marked in Tech colors. So it may have been a metaphor for the Jackets dreams of ever going to a bowl not played in freezing Idaho that starts at 9:00 am.

Woah! That's one mean story of near disaster. Let's hope it stays in your head.
What were your other two?

Are you sure you want to wish syphilis on them? Syphilis can be treated but herpes is permament (i.e., the gift that keeps on giving).

Although you do have that insanity thing with syphilis in the long term...

I don't remember the other two in their entirety, gw, but I do recall that at least one of them involved an anthrax attack or some other act of bioterrorism at the stadium. As airborne threats go, though, I still don't know if that's quite as dangerous as Devin Aromashodu.