The weekend that was, and by "was" I mean "sucked out loud."

Another chapter has been written in my lengthy history of attending the Georgia-Auburn game, and in terms of abject shittiness, this one probably beat all of them except for the '99 debacle. It wasn't just the game, although that was certainly a contributing factor. Not just the fact that we lost but the way we lost. At least when Georgia got prison-shower-raped by Auburn last year, we could just throw up our hands and say well, Auburn was an unstoppable juggernaut preordained by God to roll to 13-0 by napalming every team in their way. But not this year. Auburn was eminently beatable, and we had them beat right down to the point where they complete a 62-yard pass play on 4th-and-10 with less than two minutes left. And that, as they say, was that.

Of course, that was just one of several woulda-coulda-shouldas. If we don't commit two consecutive delay-of-game penalties on a flippin' two-point conversion try in the fourth, maybe we're up by three instead of two in the final minutes and we can still force OT by holding Auburn to a field goal. Maybe we don't repeatedly call running plays on 3rd-and-10-plus, thereby actually converting a 3rd-and-long for once. I'm not gonna turn into one of those people who jump on Mark Richt if he so much as says "Coach Martinez and me" instead of "Coach Martinez and I" in the postgame press conference, but Mark, darling, sweetie, purely platonic male love of my life, listen: Stop calling run plays on 3rd-and-17. You can't do that against a defense like Auburn's if you actually intend to convert the down. I know what you're thinking -- the D is expecting pass, so you run Thomas Brown or whoever underneath them and hope the blockers can sort out the rest -- but it takes a long time for even the best RBs to bob and weave for 17 yards, particularly when you factor in all the east-west running you're going to have to do, and you can't honestly think Auburn's LBs aren't going to figure things out and drop back out of coverage before the RB gets 17. Particularly when The Deej is launching rocket-propelled grenades right into the teeth of the Auburn secondary all night long, you've got to trust him to be able to connect on a semi-long pass like that even when the D is expecting it.

One statistic you hear about Georgia all the time -- and one that was decisively blown up by Auburn last night -- was that under Mark Richt, the Dawgs were 45-0 (coming into this game) when scoring at least 18 points. In other words, we've got one rocking-ass D, if all we need is 18 to secure a victory. But there's a flip side to that coin, and that is that during the same period, Georgia is only 5-5 when the opponent scores at least 24. What that says to me is that as comfortable as we are in low-scoring defensive struggles, we really start getting antsy when it turns into a shootout, as if our offense is squirming around going, "Awww, do we have to score that many points?" You'd think that under a coach who was the O-coordinator at FSU during a period when the 'Noles would routinely drop 60 points on an opponent and then be like, "What? Why are you all looking at me?", we wouldn't be quite so squeamish in that regard. And maybe "squeamish" isn't the right word, but again, when you're faced with 3rd-and-17 and you're calling a running play, you're certainly not giving people the impression that scoring points is a paramount concern for you. 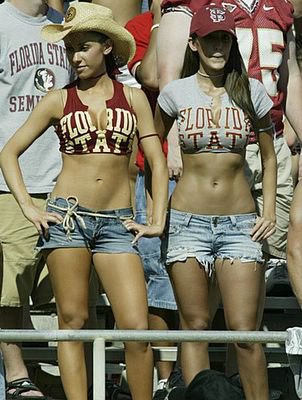 As a former FSU guy, Mark Richt should know something about dropping mad stupid points on opponents. Yes, I realize that this picture's connection to that point is tenuous at best.

But anyway, enough Sunday-evening-quarterbacking. The real scrotum-stomper of the wekend came when I bought a ticket for my sister to go to the game with me. I'd gotten one from an Auburn friend of mine for $60, and I bought one from a scalper for $80 so that Ann would be able to go. And guess what it turned out to be? I'll give you a hint, it rhymes with "mounterfit." Yup, the ticket was a motherf$#!ing fake. So I got to wipe my ass with eighty bucks and Ann got to stay home from the game. Not that she would've enjoyed it that much had she gone, but still, that's an awfully expensive way to sit on your ass and watch the game on TV at Between the Hedges.

Already pissed about this, and then of course compounded with pissed-offedness about the game, I took my Jack-Daniels-fuelled frustrations out on the denizens of downtown Athens for the rest of the night. The best thing I can find to compare it to is this bit Dave Attell has about contracting the "lonely bug" and going out to try and find some companionship: "I go to this bar, I see a beautiful woman sitting there. I'm thinking, she's alone. I'm alone. Why not . . . annoy the shit out of her." I don' remember what all I did or said. I'm sure it wasn't the least bit charming. To the lovely blonde named Molly on the second floor of El Centro whom I hit on drunkenly/shamelessly most likely in full view of her boyfriend, all I can say is: I'm sorry. Really, really sorry.

Athens this morning was a languid, barren place, more so than I'm used to seeing it the day after a game. Ann had the best description of it I've ever heard: "The morning after a win, the town is real quiet, you can tell it's been a wild night, there's trash and shit all over the place. It's kind of like a girl who's just spent the previous night having hours of non-stop wild sex -- she's disheveled, she's tired, but it's that afterglowy, shagged-out kind of tired, she's laying back with a big smile on her face smoking a cigarette. But after a game like last night's, it's nothing like that -- she looks like hell and she's looking nervously over her shoulder, saying, 'I told you not in the butt.' " That is some Pulitzer-quality prose right there, kids. Don't even act like it's not. 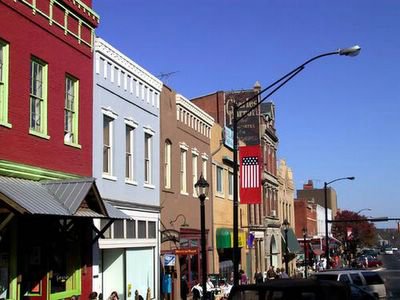 Athens on one of those lovely mornings when it hasn't just been slipped a roofie and had its innocence stolen by the Auburn Tigers.

Fortunately this will probably all end up not mattering since Florida was kind enough to get punked by the Ol' Ballcoach just hours before Georgia kicked off against Auburn. But it was still a lousy centerpiece to a weekend already brimming with football-related lousiness -- UAB lost, meaning their bowl hopes are hanging by a thread that Mike Price will probably snip right in half this coming weekend, assuming he doesn't spend an undue amount of time sampling the strip clubs of Nuevo Laredo between now and then; Alabama lost, meaning we're probably not gonna get the Bama-Georgia SEC championship matchup I was not-so-secretly pining for; the Redskins lost in a fashion every bit as heartbreaking as Georgia did; and Atlanta lost to a 1-7 Green Bay team. The only saving graces were Virginia, who did an admirable job of Protecting This Howwwwse against Georgia Tech, and my fantasy football team, the Sloppy Seconds, who appear to have annihilated their opponent this week.

Shaun Alexander points to the adoring Birmingham crowd after one of the three TDs he scored for the Sloppy Seconds on Sunday.

Well, there's at least one other bit of good news, albeit non-football-related. Come the middle of this week, I will be posting to this thing using a brand-spankin'-new Dell Inspiron 6000. It's silver, baby. Silver.
Posted by Astronaut Mike Dexter at 7:52 PM

More good football-related news: U of Oregon beat Washington State. Don't know if that means jack to you, but it's important around here.

...and OSU won as well. Small consulation for the 'Skins loss, but at least the entire weekend was not a bust.

OSU must mean something different to you, hmmmm, than it does to me, because Oregon State U lost to Stanford (big surprise...not).

I feel your 3rd & 17 pain, Doug. Brodie Croyle wasn't too hot, and his receivers generally declined to catch a pass anyway, so we saw a lot of 'WTF!?!' play calls, too.

And of course LSU picks THIS week to play 60 minutes without turning the ball over.

But then Sat. night I had to sit with my Auburn-fan wife and watch GA-AU. That was some painful shit, yo.

This is an interesting little array of college football-fandom here, with several distinct geographical regions represented. We have someone who thinks OSU is Ohio State; we have another one who thinks it's Oregon State; and we have a third who can't think of a southeastern state that starts with O so it must not matter.

OSU could be Oklahoma State too (was that what you were saying Doug?)not that I'm a fan of them.

Do a google on OSU and see what rises to the top?! Go Bucks!
http://www.google.com/search?hl=en&q=OSU

Can't say I have a whole lot of affection for OSU outside of the fact that my cousin goes there, but I do love that one sketch about what it takes to get a buckeye sticker on your helmet. "Convert on third and long? Buckeye! Pick up my dry cleaning? Buckeye!" Always makes me giggle.

...don't know where Mike put his Buckeye sticker (don't ask, don't tell!) when he earned one, but I know he had to do more than pick up Coach's dry cleaning!

Just saying ... Richt went with running plays so that Georgia could get in field goal range and take a one-point lead. Georgia needed to score, and that's what they did.