Don't even come around here frontin' that A&F crap unless you want my Gap style to tax that ass.

I think it's time to call a spade a spade and treat Abercrombie & Fitch for what it really is: a tool of the fuckin' devil. Honestly, if the producers of "The Devil's Advocate" had been looking for something a little less on-the-nose than "lawyer" for Al Pacino's character to be, they would've chosen "marketing executive for A&F." OK, maybe "handmaids of the Prince of Lies" is a little strong as comparisons go, but at the very least A&F is the kids who try to get their mom to watch them do some stupid little dance while she's trying to talk on the phone, and when she doesn't pay attention they break into the utility closet and set the house on fire.

Aberblahblah's latest attempt to permanently establish themselves as the most blatantly tasteless clothing line in America: a series of T-shirts bearing slogans like "Who needs a brain when you have these?" Now, before any of my fellow big-boob-lovin' Neanderthal males start worrying that I've gone soft, I want to make it clear that my opposition to these shirts is not in any way related to not liking big boobs or the women who have them. Big boobs, the vast majority of the time, are awesome. But any woman who would publicly advertise her intent to coast through life on her gazongas is a woman to run away from just as fast as you'd run away from a mushroom cloud or an Ashlee Simpson concert. (Seriously, has anyone found a use for Ashlee Simpson other than something to hold the camera while you're getting your freak on with Jessica? I'm just asking.) Not to mention that actual hot chicks with breathtaking chests will probably never wear these shirts because they don't need to wear these shirts, leaving them instead for the high-school mall trash who hold up Tara Reid as a "strong female role model" and lack the life experience to understand that a) 25 pounds overweight + tight T-shirt and lowrider jeans = gouge my eyes out and b) wearing a T-shirt that says "Hottie" does not make you a hottie, it only makes you someone who has to shout "I said, I am SOOOO DRUNK!" in order to so much as get heavy-petted at Trip Cameron's after-prom party. 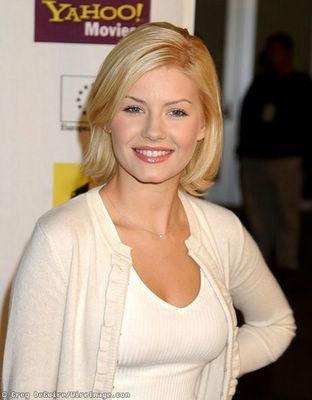 But back to the nature at hand (perfection is perfected so I'ma let 'em understand). This is just the latest offense in a long line of humanity-debasing, soul-deadening sins committed by Abercrombie & Fitch, including, but not exclusive to:

· Those bad-imitation-of-soft-porn catalogs that forced you to check out numerous bare male asses if you so much as wanted to see which trouser styles were in that season.

· The T-shirts they sold that reinforced racist stereotypes of Asians (and their subsequent claims that "We personally thought Asians would love this T-shirt").

· T-shirts featuring the image of a gymnast and the phrase "L is for loser" shortly after the 2004 USA women's gymnastics team failed to win a gold medal. (I actually didn't know about this until I read the Newsday article linked above.) 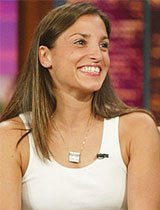 Fuck with Mohini Bhardwaj, will you? You've just written your own death warrant, pal.

· The thong underwear they created -- and this is really the height of utter revulsion here -- for girls as young as ten years old that featured words like "eye candy" and "wink wink" on the crotch.

And I haven't even gotten into that song "Summer Girls" that came out in 1999, the one with the line that went "I like girls that wear Abercrombie and Fitch" -- now, I can't prove it, but you don't have to be a Lee-Harvey-Oswald-was-framed conspiracy theorist to surmise that some money changed hands between A&F and the group that recorded the song. That group's name was LFO (which evidently stood for "Lyte Funky Ones," and that's a firing-squad-worthy offense right there), and if you don't remember who the hell that is, "Summer Girls" is the reason -- quite possibly the worst pop song ever recorded. (And no, I haven't forgotten about Gwen Stefani driving the last nail into the coffin containing her good reputation with that "Hollaback Girl" crap. That shit is retarded, R-E-T-A-R-D-E-D, retarded.) In addition to the blatant whoring for Abercrombie & Fitch, "Summer Girls" contained lines such as:

Hip-hop marmalade spic-and-span,
Met you one summer and it all began
You're the best girl that I ever did see,
The great Larry Bird jersey 33
When you take a sip you buzz like a hornet
Billy Shakespeare wrote a whole bunch of sonnets

OK, that is just somebody drinking a Red Bull and barfing some words out onto a page right here. You know those improv-comedy deals where someone shouts out "Ted Kennedy," someone shouts out "gene splicing," and someone shouts out "the Taj Mahal," and the actors have to come up with a skit on the fly containing all three of those things? "Summer Girls" was basically that, only with lame white-boy pseudo-hip-hop instead of comedy. Here we are telling this girl how fine she is, now we're hanging a richard and name-checking Larry Bird. Now we're name-checking Shakespeare but calling him "Billy." I could go on but I'm too afraid Kevin Federline is reading this as we speak, taking notes. 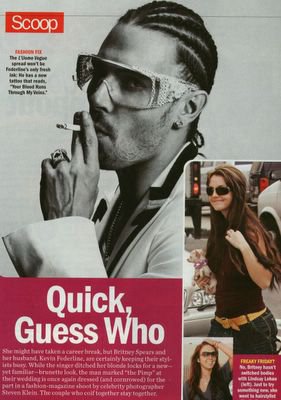 The cornrows, the oversized shades, the insouciantly poised cigarette -- it can all add up to only one thing: K-Fed would just as soon kill you as look at you.

Anyway, though it appears that the "girlcott" (OK, call me lame, I think that's cool) against A&F might be over now that they've pulled the offending look-at-my-titties shirts, I don't think we should be ending this so hastily. They may have pulled this latest travesty off the shelves, but if history is any guide, they're only going to come up with something worse within a year's time, and not only that but we may be subjected to some shitty pop group singing a song about it. I say we keep the boycott/girlcott/humancott going until Abercrombie & Fitch has been wiped off the face of the earth. I'm sorry if this bears a suspiciously "final solution" taint to it, but I'm all about some economic cleansing if it means none of my daughters, should I ever be fortunate enough to have any, will ever be tempted to let any of their male fifth-grade classmates read the words "eye candy" emblazoned across their prepubescent cooches.

In the meantime, check this Pandagon post in which Amanda Marcotte, who I'm really starting to wish a) lived closer than Austin, Texas, and b) was closer to my girlfriend, passes along some alternatives to A&F's T-shirt slogans. My favorite, of course, being Amanda's own "Will pretend to be stupid for some cock." I'm actually surprised that hasn't already popped up at a shopping mall somewhere in a big Southeastern suburb, in completely non-ironic context, of course.
Posted by Astronaut Mike Dexter at 9:03 PM

Right. First things first. When you say genuine hot girls don't wear the t-shirts because "they don't need to", are you implying that the concept of breasts beating brains is valid, you simply object to a t-shirt spelling it out?

Secondly, "girlcott". Lame. I object to the dumbing down of the English language. The word Boycott originates in the Land War in 1860's Ireland when Irish tenants refused to obey or work for a Captain Boycott after he possessed lands from which an Irish tenant had just been evicted. A bunch of pimply 16 year old girls displaying a complete lack of sense of humour and further compounding their narrow world view through the corruption of a word through the implication it is somehow gender specific says nothing but "I need to get out more" about said girls.

Rant over.
And hands off Elisha. I saw her first. Honest.

You SO need to live closer to Oregon so you can start dating my best friend Talana. She would love you, you would love her, your children would be awkwardly nerdy but gorgeous, and the world would be a much better place, politically.

Festinog, those "16 year old girls displaying a complete lack of sense of humour" were actually A&F's target market saying, "Hey, y'know those shirts you're trying to sell to us? We find them offensive." You can check out the Pandagon post on the subject, but the general idea of the upset is that these aren't clever, ironic shirts; there is no irony in a t-shirt, because the t-shirt has no context. "I'm too pretty to do math" would be hella ironic on me, because I'm a physics geek, but to anyone who doesn't know that about me, it's just feeding into the stereotype that pretty and smart are mutually exclusive. The "I had a nightmare that I was a brunette"? Ironic only if worn by a brunette. I'd personally love to see the "Who needs brains when you have these" shirt on a dude.

These girls are just saying, "These shirts make us look bad, they put out a stereotype about women that we don't support, and you can go ahead and do it, but let's see if you make any money off of it." I think it's fairly rocking for a number of reasons. One, they're smarter than a lot of people out there and instead of just screaming, "There should be a law!" they're hitting them in the wallet. Two, they're teenagers who are self-aware enough to be offended by the stereotypes on the shirts and come up with a plan to address it. Three, I really do like the idea of a "girlcott." I think that there, they aren't objecting to any perceived gender bias in the word "boycott;" they're using the word to emphasize the fact that they are, in fact, girls, objecting to these shirts that A&F assumes will be universally adored by girls. And y'know what? After all that, A&F pulled the shirts. Sounds like the humo(u)rless 16-year-olds actually got something done.

I agree, A&F has a history of marketing-for-outrage. They just enjoy it. It must've boosted their sales at some point, so they keep trying it now and again.

Just about anything can be put on a T-shirt, cap, whatever, and will sell here in Alabama -- just so long as it don't vibrate.

Hot girls won't need to wear those shirts because fabulous tits pretty much advertise themselves. If your tits aren't great enough to call attention to themselves, wearing a shirt that calls attention to them probably just means you're rocking a lot of padding under there. Or you're a slut.

As for the "validity" of the breasts-beating-brains concept, I'm not sure, but I do know that it works a lot better when you're not telling people you're doing it. Women have been using their bodies to get stuff for centuries now, I'm sure, but the subterfuge lasts a lot longer when you don't come right out and say "Tee-hee! I can get you to do whatever I want 'cause of my boobies!"

I've been meaning to link to this post at Blue Gal and finally got around to it. Cheers. And keep the faith.