Your taste buds are gonna need to have a cigarette when you're done.

Some of you have inquired about the cheese grits that I consumed at Thanksgiving, and my mom, because she's a generous individual who wants to spread the gift of good eatin' far and wide, has been kind enough to allow her recipe to be shared with the world through this humble blog. She cautions that this was originally not her recipe but that of Edie Dalton, former First Lady of the great Commonwealth of Virginia (Mrs. Dalton's mom was a patient of my dad's when we lived in Radford, Virginia, and yes, in a city of 12,000 that qualifies as famous). Here's what you'll need:

6 cups of water
1.5 cups of dry grits (not that instant crap, and absolutely not Cream of Wheat, for you Yankees who were thinking about it just now)
0.5 sticks of butter
1 pound of sharp cheddar cheese, grated
0.25 teaspoons of minced garlic
2 eggs
salt and pepper to taste
10-12 filtered cigarettes

First, boil the water -- don't dump the grits in until the water is boiling or it'll turn out crappy (trust me, I've already made this mistake once). Sprinkle the grits into the boiling water and stir with a whisk for about 5 minutes until thick.

Add the butter, cheese, and garlic, and stir until the butter and cheese melt. Then beat the two eggs and add them into the mixture, stirring constantly so that the eggs don't cook before they can be mixed in properly. Then add salt and pepper.

Now pour the whole shebangabang into a greased 3-qt casserole dish and bake at 350 degrees for about an hour. Serves 10-12.

After everyone finishes their grits, bust out the cigarettes -- they're gonna need 'em. It's that good. 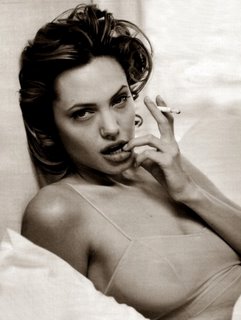 Angelina Jolie in a state of post-grits ecstasy.
Posted by Astronaut Mike Dexter at 10:38 PM

thank you, thank you for the recipe - now I am not the only one in the family left in the dark about your mom's great grits! (that sounds somewhat obscene!)

Bake them at what temperature for an hour in the oven?

Whoops, sorry, that is kind of important, isn't it. 350 degrees is the magic number. Consider it corrected.