Now tell us how you really feel.

All things considered, I'd have to say I was uncharacteristically charitable toward Georgia Tech in the week leading up to last night's big rivalry game. And with that in mind, I would be remiss if I didn't give props to Tech's defense, which was realer-than-real-deal-Holyfield and actually caused me to have one of those horrible visions, roundabout the end of halftime, wherein I pictured my sister and myself wandering out of Manuel's Tavern in a daze, pierced by a gauntlet of smug looks from Georgia Tech fans who'd just watched their team beat UGA for the first time since the previous century and were eagerly anticipating a long night of lighting up the Internet message boards with gleeful tales of how Mark Richt really ain't shit after all, D.J. Shockley is overrated, this proves the ACC really is better than the SEC after all, blah blah freaking blah. Nightmare scenario, in other words.

But then Flowers busted those fantastic punt returns, Shock threw that beautiful touchdown pass to Bryan McClendon that was actually caught, and Reggie Ball threw that interception that was so totally telegraphed from the moment he set his feet in the pocket that you had to wonder whether it wasn't preordained from the moment God created Man, and . . . 14-7, Dawgs.

Now, as I've said, this past week has taught me that there actually are some good Techies out there, and I thank y'all for having made this an interesting and edifying week, but for the rest of y'all, the haters, the "Jasper Sanks fumbled" crowd, the folks who continue to say stuff like "A Tech grad's gonna be your boss one day" even though a Tech grad has never been my boss, though in fact I was the boss of a Techie while I worked in Atlanta way back when, to all y'all . . . well, I'll let the Man in Black, my spiritual advisor, the subject of the biopic "Walk the Line" (which I saw on Friday and which was awesome, FYI), Johnny Cash, sum it up for me: 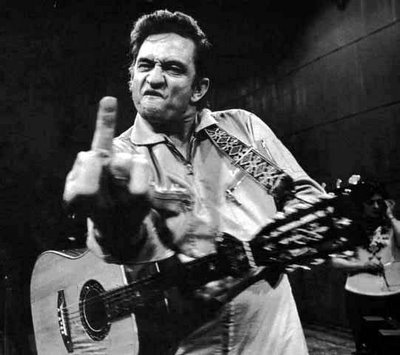 Ahhhh. Cathartic, no? It's not good to keep your emotions bottled up.

But seriously, good game. See y'all in 363 days.
Posted by Astronaut Mike Dexter at 8:55 AM

You're an asshole just like every other UGA fan I've ever met. This is why I hate you guys so much. You think football is so damn important that you want to win at all costs and are willing to be in denial about what everyone else in the college football world knows: UGA is the one of the dirtiest programs out there. Right up there with Ohio State, FSU, Michigan, Miami, formerly Colorado, etc. And then your fans are jerks and throw it in everyone's face when you win. You deserve to lose every game you ever play. One day UGA's transgressions will finally get proven to someone who can do something about it and you'll be put in your rightful place.