Once again back is the incredible, the rhyme animal, the unintelligible . . .

Sorry for the lack of posting for the past, well, week. I guess it was residual lingering depression over the Georgia loss to Florida, followed closely on its heels by a virus bad enough to keep me home from work for two days. (And before anyone makes a joke about me considering a paper cut bad enough to stay home for two days, let the record show I've only used a full sick day once since taking this job, and I've got enough sick days accrued to take an entire month off as a sabbatical, by which I of course mean "raging bender.") Then after that I was running around all weekend, and just when I thought I had recovered from that . . . well, that was when I saw the new Victoria's Secret ad for the first time, the one where Gisele is standing at the end of the hallway and she lets her robe drop and . . . well, that pretty much knocked me out of commission for another day right there. Seriously, I think I blacked out just now just thinking about it. (Especially now that Gisele's dumped Leonardo DiCaprio. I don't want to put her on the spot here by saying that I had anything to do with this, but let's be real here. Once you go Doug, you'll never settle for a hug.) 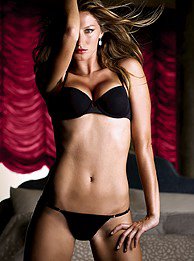 But anyway, I had an epiphany today, and it has to do with me finally figuring out what bugs the ever-living poop out of me regarding George W. Bush's speaking style. Whenever he gives a speech or answers questions (haltingly) at a press conference, it's like nails on a blackboard, because Bush raises his voice to a very! forceful! level! and does this very forceful ee-nun-see-yay-ting, like you just haven't gotten this yet, but I'm-going-to-explain-it-to-you-one-more-time. Like I'm the stupid one, and I'm sorry, but that's like Rush Limbaugh telling me I could stand to lose a few pounds. And the worst thing is he does this ve-ry de-lib-erate ex-plai-ning voice even when he has absolutely nothing to say, like in this exchange from today's press conference in Panama:

Q. Mr. President, there has been a bit of an international outcry over reports of secret U.S. prisons in Europe for terrorism suspects. Will you let the Red Cross have access to them? And do you agree with Vice President Cheney that the CIA should be exempt from legislation to ban torture?

"The executive branch has the obligation to protect the American people . . . We are finding terrorists and bringing them to justice . . . We are trying to disrupt their plots and plans." Are you now? Ooooh-weee, that's some real revolutionary strategic thinkin' there, Sun-Tzu. And yet he. says. it. with. this. ex. agg. er. ated. clar. i. ty. like you're some half-wit who can't follow along with his brilliance unless he talks to you like a child.

And yet I could never figure out quite what to compare this to, how to explain why it annoys me so much, until I actually read the transcripts of some of Bush's other remarks in Panama today.

I look forward to going to the Panama Canal. I am most impressed by the management of the Canal. Those who are responsible for the Panama Canal have done an excellent job, and this is beneficial to the world. And I congratulate you for that. And I'm really looking forward to seeing it.

As bad as this looks now, you have to compare it against the very elegant, free-flowing words delivered by the Panamanian president to realize the true scope of Bush's dullness. Granted, Torrijos's words were translated from the Spanish, but I can't think that the White House transcribers were all that concerned with flowering it up for anyone. Basically, Torrijos sounded like he was speaking to people who actually gave a rat's ass, while Bush sounded like he was trying to dumb it down for a bunch of Central Americans he evidently thought had the IQs of second-graders.

I thought about that, and that's when it hit me: No matter whom he's speaking to -- Americans, Panamanians, the White House press corps, the handpicked audiences at his silly little Social Security sales pitches -- Bush speaks to other people like dumb Southerners speak to foreigners. You ever hear some Southerner say jokingly (or in some cases, not all that jokingly), "If they don't speak English, just talk louder"? Well, that's how Bush talks to everybody. It doesn't matter whether he's spouting some GOP talking point lighter than the paper it's printed on, he bends down and barks it in your face like a North Carolina retiree who just can't believe these dumb eye-talians can't direct him to the nearest wrist-o-ranty in fricking English. If this doesn't offend you, it should, because again, Bush treating anyone like The Dumb One is a case of Dikembe Mutombo calling the kettle black if ever I heard one. But I've probably ranted on this long enough already. 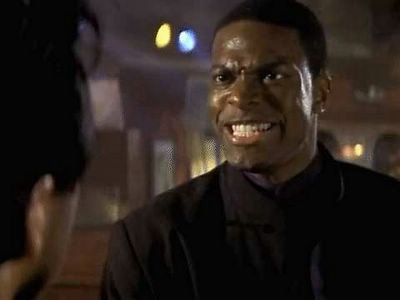 Dubya: "Do yooou understand the wooords that are comin' outta my mooouth?"

Anyway, while I was clinically depressed/sick/entranced by Gisele Bündchen's ya-ya sisterhood, the following things happened:

· I gave up hope of ever getting to go out with the astronomically hot Ukrainian waitress from around the block ever again, thus lending credence to my friend Brian's description of me that "Doug has more first dates than anyone I know . . . and fewer second dates than anyone I know." Yup, this was God's way of saying, "Yeah, I figured you could use a little pick-me-up for one night, but sorry, I don't have enough for seconds."

· UAB actually won another football game, whacking Memphis 37-20 and maintaining a glimmer of hope that they somehow might back their way into a bowl berth despite losing to Southern Fucking Methodist earlier in the season. Yeah, it's not gonna be a great bowl regardless, but the PoopChute.com Bowl still looks like a blessing when you've dropped one to SMU.

· We got brand-new wide-screen iMac G5s at work, revolutionizing my computing experience and throwing into even more glaring Technicolor just how ancient my laptop is at home. Yeah, cable modems are teh aw3som3, but hooking one up to a six-year-old Inspiron is kind of like dropping a small-block Chevy V8 into the engine bay of your Kia Rio. Theoretically it should be really fast, but it'll crash in a smoldering heap before you ever get to find out.

Anyway, if any of y'all have any ideas about which laptop I should get as a replacement, holla at a brother. It'll probably be another Dell, maybe even the pimp-daddy XPS notebook, but if any of y'all are sitting there going "NoNoNoNoNo! IBM/Toshiba/Sony/BlahBlah is the shit!!1!!1!" then let me know. Life's too short to waste it downloading Michelle Marsh softcore at 10 minutes per picture.

Y'all still haven't given me any leads for Georgia-Auburn tickets, by the way. That's ah'ight, though. If I don't come up with anything by Saturday I'ma just go to Athens anyway and start arm-tackling orange-and-blue-clad little old ladies in the Stegeman Coliseum parking lot. And when they end up in the hospital and I end up in the slammer, whose fault is it gonna be? Yup, yours. I don't like to point fingers and whatnot, but it'll be all your fault. I hope you can live with that.
Posted by Astronaut Mike Dexter at 6:58 PM

I've got a Toshiba, and have had some minor probs with it. Therefore, I would avoid Toshiba.

Once you go Mac, you never go back.

I was always more of a Adriana Lima or Alessandra Ambrosio guy. Brazil though, what a friggin country.

For the record, only missing ne day of work through illness is nothing to be proud of. Shame on you.

I've had a Latitude C400 for work for two years and I love it. I just bought a laptop today for personal use and I was really thinking about getting a Dell, but wasn't very impressed with what they had versus the cost. I ended up buying an iBook, so maybe I'll never go back. I would really like to leave the world of Windows (with all its security holes) behind.

Hi, Doug. As an editor for a tech book publisher I've worked with a couple of authors who've written about laptops.

Obviously, there's plenty to choose from, but whichever laptop you get should depend entirely on what you use it for. If you want a laptop that'll play games, systems like those from Alienware, Falcon Northwest or a Dell XPS could all do the trick for you. If you want a light, business laptop, I'd say look at the ThinkPad line from Lenovo (these are the laptops that used to be marketed under IBM's brand). I'm not a Mac guy so I don't know what your options are there, but I'm sure if it fits your needs there's some form of iBook or whatever that will do the trick.

For the non-Apple world, generally Intel's Centrino line using Pentium D processors seems to review better does AMD's Sempron line of laptop CPUs. I would say don't go for less than 512KB of RAM, a hard drive of no less than 40-60GB (and a 7200RPM spin rate is very important), and if you play any games a good video graphics chipset. Not sure what's top of the line these days, but in the desktop world I know you'd want one from ATI or nVidia that has about 256MB of dedicated video memory.

Best of luck. Btw, I've only just started reading your blog, but it's entertaining as hell. Love the title. You don't see many obscure references to Grosse Pointe Blank these days. :)
---Todd
sportsgamer.blogspot.com

Scratch part of that above, I meant Pentium M, not Pentium D for the CPU used in the Centrino line.