Well, you've obviously come here by mistake. So I don't know what to tell you.

Well, here's the new blog. I just know the two people in North America who give a rat's ass are smiling and clapping their hands with joy, and awwww, I'm so glad I could make you guys happy!

Anyway, this is the blog that I'm doing now that George W. Bush, Will You Please Go Now?! has been placed on permanent hiatus; that stemmed from my being diagnosed with a case of late-onset liberal outrage fatigue (LOF) so acute that no dose of Klonopin, Paxil, or Stolichnaya was prepared to deal with it. This blog will talk about politics quite frequently, I'm sure, but by no means is it meant to be a replacement for GWBWYPGN?!, because there's going to be a lot of non-political stuff here, too -- popular culture, college football, stupid stuff of a very general nature that just happens to pop up in the news.

Oh, and there'll even be stuff about my own life in here. With GWBWYPGN?!, I was usually loath to throw in news updates on my own life, because 1) I figured people were coming there for political stuff, not news about me, and 2) I was never self-confident enough to believe anyone would actually want to read crap about what's going on in the life of Yours Truly. And I'm still not, really, but I guess I looked at certain really good bloggers who include stuff about themselves and manage to make it pretty entertaining and worthwhile so I figured, well, it can be done. So I'm going to give it a try. That's not to say I'm going to be writing about what I had at the Starbucks on 11th on a given morning or what a caterpillar crawling across a sidewalk crack made me discover about myself and my place in the world, and it will snow strawberry daiquiris in Baghdad before I put any f$#!ing poetry on here, mine or anyone else's. But every once in a while something may happen in my life that meets the rigorous standards of "mildly amusing," and if that happens, I'll do a little something about it -- maybe it'll be about having dinner with Wes Clark (which I get to do in Little Rock next month, so eat it, suckers!); maybe it'll be about the weirdly John Hughesian feeling of spiritual lockup you get when you go back to your hometown, run into the girl you had a Price Club economy-sized crush on in high school, find out she's freshly divorced, and realize you haven't changed as much from the person you were in high school as you thought you had; or maybe it'll just be something really funny my sister said while she was hammered out of her mind. But I'll try to make it interesting.

I do, however, reserve the right at all times to do cheesy stuff that at one time or another I may have vowed never to do on GWBWYPGN?! -- like, for instance, posting pictures of pets. 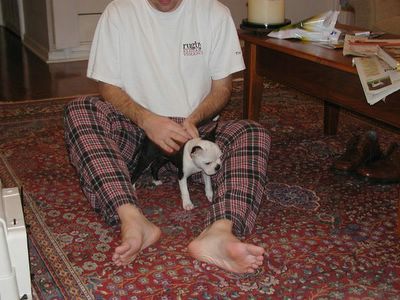 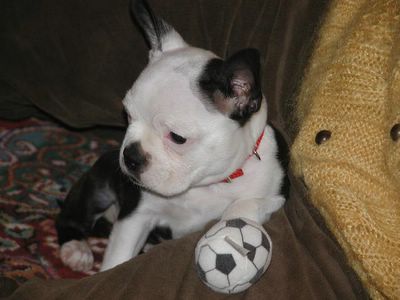 Anyway, now might be a good time to give fair warning: Some of y'all who came here from GWBWYPGN?! and are expecting the pissed-off political ranting to pick up right where it left off, in the exact same fashion in which it left off, are going to be disappointed with this new thing I got goin'. But as I said when I closed the doors and nailed up plywood over the windows at GWBWYPGN?!, man cannot live on politics alone. Being able to venture into areas other than politics is going to make this a lot more fun for me, which in turn (I hope) will make it somewhat fun for you. Notice I didn't promise mind-blowingly. Just somewhat.

And if it doesn't, then you don't have to come here. Now, before, when I was trying to run a reasonably intelligent, respectable political blog, I wouldn't have added "jerk-face" to that last comment. But now I have the freedom to do just that, jerk-face!

Nevertheless, I hope you will come here, and enjoy it, and link to it, and leave comments, and give me advice on how to improve with my continuously Arizona-Cardinals-like string of crappy luck in the relationship department, when I solicit it, which will be often, I'm sure. In the meantime, have fun and don't forget to tip your waitress on the way out.
Posted by Astronaut Mike Dexter at 10:17 PM

I'll check it all the freakin time.
Go blog!
...
So this is what it's like to be the first commenter. Taking a deep breath, smelling the roses. Ah.

What's wrong with sitting on the couch? Anon.

Could you not find a better picture of yourself? Give Jenna smootches for me!

I will trade one (1) penguin for the puppy.

Oh, such precious puppy goodness!!! How cute and tiny! I send her many hugs.

Is Santorum a relation?

It's Doug, formerly of "Off The Subject" fame... I found you through Dave Akins website, which I found through my friend Christian's site because we are in a dodgeball league together. It's a small world wide web after all. Anyway, I'm friends with Larry and I used to post on ya'll's blog every blue moon. I got my own page up now at mackwilliams.com. Check it out if you get a chance... it features news about me, art, sharks and dinosaurs.