It's the first Friday Random Ten of 2008, and that means it's time to do the clichéd thing and start whipping out resolutions. I know, you're probably scratching your heads right now, thinking, "But Doug, you're such a great person who's brought so much joy into my life with this blog, and by all reports you're devilishly handsome -- I mean, not Conan O'Brien handsome, but still pretty fucking hot -- to boot. What resolutions could you possibly need to make?" And I know, I kind of thought the same thing for a while there, but I did a little soul-searching between Christmas and New Year's and determined that yeah, there were actually one or two things I could stand to, well, tighten a little. So here's Five New Year's Resolutions For 2008: 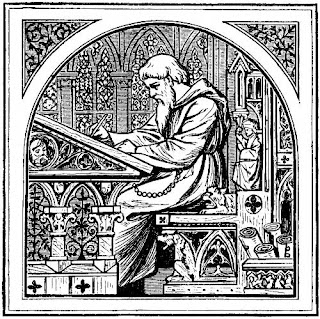 Do more writing of a non-work and non-blog nature.
Once upon a time I actually had writing projects other than this blog and the stuff I was assigned for work. At one point I was even planning on dialing back the blog a bit to be able to spend more time on one of them. Well, that, like all of the other best-laid plans of mice and men, went astray, but my first resolution is to redouble my efforts on that stuff, the first and most pressing priority being the screenplay that I've been fucking with for a decade now. Now, I don't plan on allowing this to inhibit the blog at all, but my goal is to write at least one (1) non-work-related, non-blog pages every day, so that maybe by the end of this year I'll actually have the screenplay finished, perhaps even something I can shop around to bring in a little money on the side. It probably figures that I now have four pages (and counting) to make up.

Do a better job of sticking to my monthly budget.
At the suggestion of my parents, and by "suggestion" I mean "threat of bodily harm," I started keeping a monthly budget on my computer about a year and a half ago, so I'd know where all my money was going and how much I had left to burn at any given moment. Which is great, and that alone puts things in a lot of perspective, but a budget is only good if you hold to it -- which, quite frankly, I've kind of gotten away from doing. It's one thing to declare on the first of the month, "I have $100 to spend this month on eating out and going to bars," but if you've spent $95 of that by the 20th and a friend calls and says, "Hey, it's so-and-so's birthday so we're going to Bottega and then we're going to head over to the Station and do shots until six in the morning," the grown-up thing to do is politely decline. I'd like to replace my eight-and-a-half-year-old TV with a plasma one of these days, and there are about 13 different things on my car that could use fixing, so I guess this is where I start making an effort to be able to afford all that. 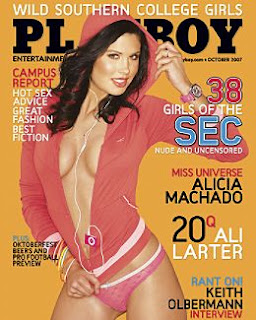 Spend less time chasing girls.
Some may not agree with me, but being single is a pain in the ass. Maybe it's just because Birmingham is a pretty difficult town for meeting single women -- seems like everyone here is either married or 16 years old, or in some cases both -- but over the last couple years I've probably gotten more stressed out over women, with less to show for it, than any other time I can remember. So I'm making the unilateral decision to just remove that from my shit-to-get-worried-about list. Now, I'm not turning completely asexual here -- if something (or someone, rather) drops into my lap, fine, we'll see where that goes. I mean, I've been getting some really filthy e-mails from Melissa Theuriau lately and I plan on continuing to respond to every single one of them. But I'm not spending any effort chasing women is what I'm saying. If I get really depressed and out of it one night and need the ego boost of feeling like a woman is throwing herself at me for a few hours, well, that's what Hooters is for. It's all an act, of course, but maybe that's for the best. 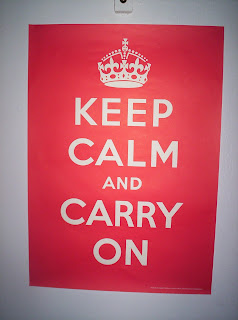 That poster was a gift to me from my sister, and it may actually be my favorite of all of the presents I got this Christmas. It comes from the World War II era, when the British were very fearful of a German invasion of their island; Her Majesty's government printed out a bunch of these posters for propaganda purposes, and in the event of a full-scale ground invasion by the Nazis, they were going to send out a bunch of people in the middle of the night to put these posters up all over London and other cities in the UK. (And it's such a classically British attitude when you get right down to it -- "Right, erm, well, we've been invaded, haven't we? Pity that. Guess I should pop on down to the market before things get too dodgy. Are we all right on tea?") Anyway, I've put this on my door so that it's the last thing I see before I leave my apartment, just as a reminder that no matter how stressful or crappy things get with respect to work, my finances, the state of my apartment, or my personal life, it's nothing I can't get through if I so choose. I mean, if the Brits could keep a stiff upper lip even through the threat of the Wehrmacht rolling through their streets, I can handle a picky client or an unexpected car repair.

So here's to staying calm and carrying on in 2008, everybody. And now the Ten:

Let's hear your Tens and/or resolutions for '08 in the comments.
Posted by Astronaut Mike Dexter at 9:02 AM

I can't help you with women (hey, who can, really?) but I have a possible solution for you with car repairs. I am old enough to be your dad, but have lived most of my life with chicken-wire-and-spit cars, and the secret to success with that is as follows:

1. Never, ever take a car to dealer first.

2. Never take a car for repairs to shop that advertises.

3. In every town there are people who are talented, honest and reasonably cheap. Find them.

4. Finding them takes research. You will almost certainly not find them in downtown Birmingham. Look in small towns even a little past the 'burbs. Ask people with older cars that seem to be working regularly. Look for really run down buildings and such where there seems to be a lot of business. This person isn't worried about his image or appearance; he's just worried about getting the work out, and keeping what he charges you instead of paying $$$ for advertising. Check the small claims court records to see if they get sued a a lot. (Not a good thing) Look for one near a junkyard, er, auto recycler. You'll find lots of these, but

5. Only about one in every five of these will be honest and smart and reasonably cheap, so once you identify some prospects, try them out with some relatively simple things and evaluate.

Might even make a decent free lance article for some local rag.

Well said Doug. I feel like that's a lot better than my resolution, which is "be drunk less."

My goal each year is the same, and that is to grow & be a better person than I was the year before.

Aside from that:
-Throw up a blog post more than once every two months
-Practice my guitar more
-Try surfing

3. "Message From The Black Ark Studio" by Lee 'Scratch' Perry, from 'Jamacian E.T.'

6. "The Revolution Will Not Be Televised" by Gil Scott-Heron, from 'The Hurricane Soundtrack'

8. "Mark On The Bus" by Beastie Boys, from 'Check Your Head'

10. "Pudpots" by Nightmares On Wax, from 'In A Space Outta Sound'

Have a great weekend.

Given your very public cheerleader fetish, I'd say Bring It On qualifies.

Great stuff, Doug. I can't wait to read your election coverage, and I wish you well on all of your resolutions.

As for the poster, that is awesome. I'd love to find one of those to go adjacent to my Stipe "Losing My Religion" pencil drawing.

I'm a little late to the party on this one, but I'll throw my resolutions in anyway. I was going for five, but wound up with eight.

1. Eat right and exercise. Now that my doctor has informed me that this is no longer optional because my cholesterol level is 251 (which is what you’d expect for a 300-pound, 50-year-old man), I figure I’ll finally have the motivation I’ve been lacking all these years. Maybe.
2. Get rid of all the crap in my house that I don’t need. And organize whatever's left. It will take every last second of 2008 to pull this one off.
3. Bump my salary up to $90k/yr. This is admittedly pretty far-fetched, but it never hurts to have goals.
4. Figure out where all my money goes. Unless I somehow manage to earn $90k, in which case, I probably won’t care.
5. Do a better job of keeping in touch with people. Instead of just wondering how people are doing while I’m sitting at my desk or stuck in rush-hour traffic, make an effort text/call/e-mail when they cross my mind. (How are you these days, Doug?)
6. Get up in the morning without hitting snooze eight times. Near impossible.
7. Procrastinate a little less.
8. Move the hell out of Kirkwood as soon as my lease is up. Then get a new computer and flat-screen TV.