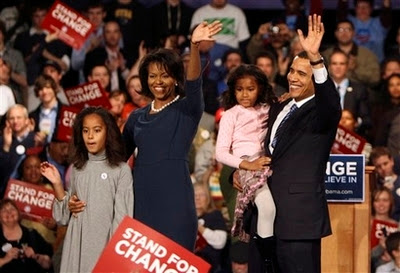 More important than just who came in first or second or third, though, was the fact that more than twice as many people turned out for the Democratic caucuses last night than for the Republican ones. I heard some folks on CNN say that the turnout was nearly twice as big as it was for the Dems in 2004, too. And I think that kind of taps into one of the main reasons I gave for supporting Barack Obama in the first place -- people see in Obama, and to some extent in the Democratic field in general, a complete break with the pettiness and selfishness that's grown across Washington like a cancer over the last eight years. And that's something that even the best of the Republicans, whom I guess the folks in Iowa decided was Huckabee, just can't offer.

ADDED: Wow. And this was in Iowa, people.
Posted by Astronaut Mike Dexter at 9:05 AM

I agree with your assessments of why Obama won in Iowa. If you go out to Politico.com and check out the interview with one of Obama's senior advisers, you'll see that they fully expect Billary to go after him full force.

It will be interesting to see how the race looks after NH, MI & SC.

Who is that lady in the photo? I thought he was married to Oprah.

I used to be a regular on the Kicking Ass DNC blog, and I think I can say truthfully I was the first person on the Barrack Bandwagon. My view is that every Democratic Party hopeful, including Mike Gravel, is light years better than every Republican would-be.

It's difficult to choose among the Dems. Sometimes I lean toward Hillary, because if her brilliant health care plan back in the day had been tried, it wouldn't have been found wanting, it would have improved with time, and USA wouldn't be disgraced by the astounding number of citizens living without health care. Oh, and the economy would be percolating several trillion more dollars. And Big Pharma lawyer armies would be the buttts of jokes rather than so-called trial lawyers.

But I still like Obama because he seems a little like Bobby Kennedy. And I'd be more than happy to vote for the first hispanic President. The Dem field is an embarrasment of riches, and should contain most of the next cabinet no matter who gets nominated.

I'm seriously hoping Huckleberrybee gets nominated. Maybe when he's trounced, Homeland Security can identify his fellow travelers that believe that Jesus walked with the dinosaur descendeants of the pair that Noah took on the Ark and ship 'em out to live with the Taliban on Mt. Ararat.

Iowa is a Democratic state, and the Republicans also had record turnout.

You know what that means? Jack shit, just like your points. And just like this whole charade of a process.

Actually, Doug, it's been spreading for the last 16 years. The aftertaste of the first 8 is the reason Hillary will not win.