An open letter to Daniel Snyder. 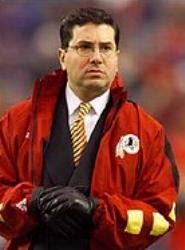 So Joe Gibbs has decided to ride his NASCAR Camry off into the sunset. There's a certain suddenness to the whole thing, but paradoxically I guess we could all kind of see it coming. The NFL is a different place from the one Joe dominated back in the '80s, and while I think Joe could've taken the 'Skins back to the Super Bowl under the right circumstances, I don't blame a 67-year-old guy for wondering if he really had the time and energy at this stage of his life to make it happen. This isn't Steve Spurrier throwing up his hands and quitting just because his master plan to assemble a fantasy team of ex-Gators and plug them back into the Fun 'n' Gun was a colossal flop in the NFL (a flop that was only predicted by a few people, by which I mean, oh, fucking everybody); this was a living legend taking stock of his life and deciding that maybe there were other people who could run his beloved team better than he was currently capable of running it. I'm not happy that he's leaving, but I can recognize the possibility that it might be for the best.

But anyway, this isn't really about Joe. Guy's already a Hall of Famer; even if he'd walked out after a 1-15 swan song rather than a 9-7 season that led to the playoffs, he'd still stand astride the NFL like a colossus. This is about what you're going to do in the wake of his departure.

I'm going to put this as gently as I can, Danny: In nearly nine years of ownership of the Washington Redskins, your ass-from-a-hole-in-the-ground differentiation abilities have been found -- what's the word? -- lacking. You've done a whole lot of embarrassing shit that hasn't been balanced out by a lot of the good stuff. And I'm not even talking about wins and losses, which I realize are not under your sole control, but -- Deion Sanders? Jeff George? Forgive me for bringing this up again, but Steve Fucking Spurrier? The whole trade-draft-picks-for-geriatric-has-beens personnel strategy, which has worked exactly never? I don't think it's a coincidence that the 'Skins' only two playoff runs of your tenure happened after you finally hired a coach to whom you were willing to hand over personnel control. For that reason I think Priority #1 in the new-coach search is finding someone who will keep you the piss hell away from the war room on Draft Day. Here's what you're going to do, Dan: You're going to go down to Raleigh, North Carolina, and dump $6 million on Bill Cowher's desk to get him to become the Redskins' next coach. You paid $5 million for Spurrier's half-assed effort, you can spend six on Cowher's whole ass. If he balks, bump it up to seven; when in doubt, groveling is never a bad thing. The thing is, Cowher's kind of a badass. He's not going to position himself behind your hiney and pucker up just because you're offering to give him an NFL paycheck again; the Falcons came calling after Petrino bolted a few weeks back and he said no. And while you may think that you're in a better position because you've run your franchise way better over the past few years than the Falcons have theirs, there are millions of Redskins fans out there who, at the very least, would like to see that question put up for debate.

Cowher's not going to chuck it all over the field the way Spurrier claimed to want to do. He's going to run the ball a lot. If he does, you will sit there and fucking like it, because he's won a lot of games that way. The Chin is the absolute best coach available right now; you know it, I know it, and Hog Nation knows it. You will call him first, you will offer him that trunkload of money, and if his initial answer is "no" then you will grow a pair and ask him at least two more times. You've got to be persistent.

What you will not do is hire some fucking retread like Billick or Mariucci. Not even Gregg Williams or Al Saunders, who are fine coordinators but have shown no particular aptitude for being a head coach. And if you hire Mike Martz, so help me, I will drop everything and drive up to Landover non-stop, and by the time I hit the on-ramp to I-66 to drive home, they won't even be able to identify you with dental records.

And as long as I'm making demands here, Danny, for the love of God, stop hanging out with Cruise. It's not 1996 anymore.

Now go forth and do good.

Hail to the Redskins,
Doug Gillett
Posted by Astronaut Mike Dexter at 6:54 PM

Sorry Doug, but Billick would be a good fit for the Redskins. He's forward thinking, is willing to try new things, has a Superbowl under his belt (and damn well should have won one last year, if it wasn't for McNair's shennanigans) and is much COOLER than other coaches. He's your guy.

Martz was hired by the 49ers as an offensive coordinator so you don't need to worry about that.