We make it so hard for ourselves.

The NFL-watching demographic and the erectile-dysfunction-medication-buying demographic share a fair chunk of people, so when you sit around watching NFL playoff games -- as I've been pretty much all afternoon -- you get subjected to a lot of boner-pill ads. I'm going to try to not even get started on the execrable "Viva Viagra" ad, but there's a different product whose ad campaign really has me scratching my head. No, not that head, you sick bastard. Let me put it to you this way: Can anyone tell me what's alike about all three of these ads, other than the product they're selling?

Did you catch it? That's right, every single ad ends with a variation on this: 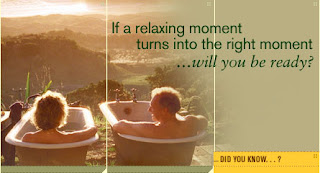 Look, I don't begrudge middle-aged dudes their boners. Just because I'm currently not having much luck finding anyone to fuck me doesn't mean I think everyone should be denied the privilege. But have any of y'all ever dragged two bathtubs out into the backyard and sat in them? Why would anyone do that? And how is two people in separate bathtubs supposed to connote sexual intercourse? If these guys are really that excited about their ability to get it up again, shouldn't they be hopping into their wives' bathtubs?

And why does that leitmotif show up in every single Cialis ad? It's like their version of the Aflac duck now; they wouldn't put it in every last one of their ads if they didn't want people to look at Cialis and go, "Oh, yeah, that's the sitting-in-separate-bathtubs boner pill." I know that nothing ever pops up in a television advertisement by accident -- they're brainstormed and storyboarded and focused-group to death -- so there's got to be some reason, on either a conscious or subliminal level, that the Cialis folks expect us to respond to the two-bathtubs thing. Can anybody out there tell me what it is? And is that all I have to look forward to when I turn 50 -- sitting in the backyard like some jagoff, separated from my wife/mistress/significant other by two layers of porcelain? That sucks. I thought a mid-life crisis was supposed to entail a new haircut, a 21-year-old girlfriend, and a Corvette; if fucking bathtubs is all I have to look forward to, I don't see why I should even bother.
Posted by Astronaut Mike Dexter at 7:54 PM

The boner pill ad series that takes the cake for me is the one where the guy says something like, "My doctor told me that diabetes could cause ED". Then another guys says something like, "My doctor explained that high blood pressure could cause ED." So is the rational person thinking he better lose weight, stop eating so many carbs and get his hypertension or diabetes under control? Nah. Take a boner pill.

Honestly, ads like that are just health hazards, and are probably illegal in any other industrialized country.

For some reason the bathtubs have always reminded me of the scene in Raising Arizona where they watch the sun set by their trailer from deck chairs. I certainly don't see a significant connection there, though.

Thanks to my wife's sister being an obsessive on the subject of hot springs, I'm told that it's not unusual for people to haul old tubs into the middle of nowhere to be fed by a hot spring - and that some hotels have them set up so you can look at a pleasing vista while sitting in a sulfuric fug.

What that has to do with having to pop a pill to pop a chubby, I don't know.

These are the salad days, Reed.

Aren't Baby Boomers the kids of the so-called "Greatest Generation"?

I've read about the 60s, and man did the boomers throw up their hands and give up from about the time I was born on. Most of 'em anyway.

Have you also noticed that his tub has the big taps on it? (In the original print ad, it looked like one giant phallus.)

1. That was exactly my thought when I saw those commercials.

2. Will, no, the generation before the baby boomers is the Greatest Generation. I pretty much only know that because my high school gave out free copies of the book. But I'm just saying.

It's also kinda depressing to realize that, according to these ads, men will continue to have to negotiate for sex, even well into their married years.