Like Sam the Butcher bringin' Alice the meat . . . the Tuesday Mystery Meat, that is. 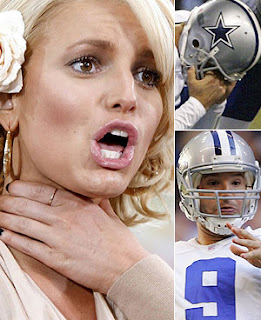 Wow, I guess it's true what they say, couples really do start to look alike after a while.

· So I watched the NFC divisional playoff game on Sunday, and yeah, I was happy. As much as I've bagged on Tony Romo in the past, I wasn't rooting against Tony Romo; as a near-lifelong Redskins fan, I was rooting against the entire Cowboys team, every last mother's son. If the 'Skins don't get to win a playoff game, then sorry, y'all don't either.

So anyway, yeah, I think the idea that Romes lost the game because he'd spent the first-round bye week nailing Jessica Simpson to within an inch of her life in Cabo is, all things considered, ridiculous. But I won't deny taking satisfaction in the fact that Cowboy fans had to spend time and energy denying this in the first place. Allow me to be realer than real here for a second: Tony Romo was being hailed as the Next Great NFL Quarterback by the Cowboy faithful even before he'd started one fucking game in a Dallas uniform; he was squiring Carrie Underwood about town before he'd played in a single playoff game; he was banging Jessica Simpson before he'd finished one full season as the Cowboys' starter. Brett Favre? Didn't get to be in "There's Something About Mary" until he'd won a Super Bowl. Tom Brady? Had to win a couple Super Bowls before he could get a taste of either Bridget Moynahan or Gisele Bundchen. But here's Smilin' Tony, 19-9 after one and a half seasons as a starter and 0-2 in the playoffs, and he's already defiling blonde starlets right and left.

Look, I don't have a problem with celebrity quarterbacks in principle; I just think you should have to earn it first. And no, having adorable dimples doesn't qualify as "earning" anything. I'm not saying that Romes is Dallas's Heath Shuler just yet, but he still hasn't quite proved that he isn't their Gus Frerotte.

· Oh, and Terrell Owens, and I say this with a heart full of Christian love, shut the fuck up. Donovan McNabb takes you to the Super Bowl and you throw him under the bus, but you turn into the Leave Britney Alone chick over Romo? Whatever, dude. Go get your popcorn ready for the Super Bowl. (Or, alternatively, you could just watch this.)

· And besides, neither one of y'all has it anywhere near as bad as Michael Vick right now. Know which prison he ended up in? I'll give you a hint: It starts with L and rhymes with "Heavenworth." Yup. Don't be surprised if he comes out of there looking like one of his dogs. 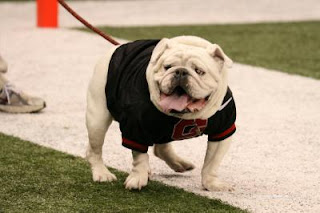 · Turning to college, and to a different kind of Dawgs: The final end-of-season BlogPoll and SEC Power Poll are in, and like the Associated Press sportswriters' poll, both have Georgia at #2 with a bullet (each with a single #1 vote for the Dawgs, oddly enough). And the build-up for the Dawgs' 2008 season has already begun, with everyone from Tony Barnhart to Stewart Mandel to even (very grudging) SEC Power Poll host Garnet and Black Attack putting the Dawgs atop their super-early preseason rankings.

Ordinarily I'd be worried about this, because few things have proven to be greater kryptonite to college football teams in the past than sky-high expectations, but the way I see it, this might actually be a good thing. See, the Dawg #1 lovefest is happening early enough to develop a nice little backlash by August, if not way before, so by the time the actual, this-counts preseason polls start popping up in late summer, the pollsters will be sick of having Georgia shoved down their throats and will knock them down to #3 or #4 in favor of the usual media darlings like USC and Ohio State. (And, I've just got this weird feeling, Notre Dame.) So don't worry at all, Georgia fans. It's all falling into place.

· Finally, I've got a couple videos I've been meaning to throw up on here for a while, the first being an SNL parody of the interactive "Dora the Explorer" videos that makes me laugh my ass off every time I watch it:

Watch the video! Watch it! What's wrong with you?!?!

And finally, I know "Family Guy" is a love-it-or-hate-it kind of show, but if you can't laugh at Peter and Lois Griffin's unusual take on bedroom role-playing, then you've got serious problems.

I honestly don't understand the attraction of Jessica Simpson. There are nicer looking, and smarter girls living in the trailer parks around here. Really.

Can I get a zip code, Anonymous?

Dunno about the trailer parks, but 30605 has her beat consistently.

(Downside, some of them already are technically younger than The Simpsons ie born in 1989/1990.)

Did that first video make sense to anyone else? Not sure what humor I'm missing..

Finally, someone skewers that b*tch Dora the Explorer. She is the devil. And I don't even have kids yet....

Pump them harder! What's wrong with you?

The guy who played Sam the Butcher just died yesterday. I blame you.