The two most disturbing things I've read in the past week. 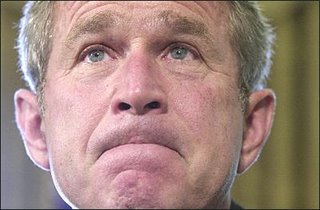 In an interview, Pelosi also said she was puzzled by what she considered the president's minimalist explanation for his confidence in the new surge of 21,500 U.S. troops that he has presented as the crux of a new "way forward" for U.S. forces in Iraq.

"He's tried this two times -- it's failed twice," the California Democrat said. "I asked him at the White House, 'Mr. President, why do you think this time it's going to work?' And he said, 'Because I told them it had to.' "

Asked if the president had elaborated, she added that he simply said, " 'I told them that they had to.' That was the end of it. That's the way it is."

Now, the reason for the steam pouring out of my ears is not the "Pelosi Says She Wasn't Consulted" headline; I mean, nobody should seriously expect that Bush has been consulting with anybody outside his own little inner circle on anything. If he's gonna blow off the entire Baker-Hamilton Group, he's sure as hell not gonna be giving Nancy Pelosi the time of day. But "I told them it had to"? That's the best you've got? What, have you been telling them, "Eh, guys, don't worry, if this doesn't work it's no big deal" all this time but only now, after four years in Iraq, you're telling them that stuff has to work? (Link via Atrios.)

Over to you, Mr. Cheney. 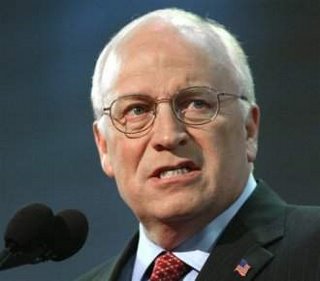 WOLF BLITZER: How worried are you --

DICK CHENEY: We still have more work to do to get a handle on the security situation, and the president's put a plan in place to do that.

BLITZER: How worried are you of this nightmare scenario, that the U.S. is building up this Shiite-dominated Iraqi government with an enormous amount of military equipment, sophisticated training, and then in the end, they're going to turn against the United States?

CHENEY: Wolf, that's not going to happen. The problem is, you've got --

After "there is no doubt that Saddam Hussein now has weapons of mass destruction" and "my belief is we will, in fact, be greeted as liberators," shouldn't "that's not going to happen" immediately set your hair standing straight on end? Seriously, has this guy been right about anything in the past six years? If Dick Cheney told me that giant rocks weren't going to start spontaneously forming in the clouds and falling to earth, the first thing I'd do would be to run out and get a helmet. (Link via Digby.)

It's time to face the reality (even if our leaders can't): This "surge" isn't based on what's right or wrong. It isn't based on sound strategy or policy. It isn't even based on what the military wants. It's based on blind, cross-your-fingers, close-your-eyes-and-throw-a-dart-at-the-wall hope. It's based on nothing more than Bush and Cheney shrugging their shoulders and saying, "Well, fuck . . . OK, heads we send more troops."

And now we have certain nutso elements in the right wing threatening what basically amounts to a purge against people in their own party who aren't satisfied with the Bush/Cheney strategy of merely leaving 21,500 troops under their pillow for the Victory Fairy to come collect. I'd almost have fun watching this, if there weren't, you know, people dying because of it.
Posted by Astronaut Mike Dexter at 8:26 AM

I am glad people are finally starting to question the judgment of this administration, as opposed to just saying they lied to get us into war. That is a useless argument that distracts from the real problem--their arrogance and ignorance. From WMD to "Mission Accomplished" to "just a few Baathist deadenders" To "the last throes" and, finally, to "Bring 'em on," Bush, Cheney, and Rumsfeld ran this war in an embarrassing way.

Cheney is simply trying to implement some reverse domino theory that he and his neo con cohorts came up with in the 90's. Clearly it's had an incredible effect reshaping the Iraq and the middle east, as it appears to be even worse area than it was in 2002.

Rumsfeld was only interested in seeing if we could fight a war on the cheap. He wanted to prove you don't need a lot of troops. However, he forgot that you need 10-1 numerical superiority to fight an insurgency that is using guerilla tactics. Thanks to him we are losing Afghanistan and Iraq is a snake pit. It doesn't matter when we leave--these people are more loyal to the tribe and their particular brand of Islam than to Iraq, and Saddam taught them how to be brutal, like drills in peoples heads for torture brutal.

Bush simply has no clue, he just likes to play dress up or cowboy and see if we can kick some ass. "Fuck Saddam, we're taking him out!!" Seriously, "it's going to work because I told them it has to work?" That's like standing on top of a building and just before jumping off saying I'm going to fly to safety because it has to work.

This is pure incompetence, up and down, top to bottom. We can't leave Iraq because everything is so screwed up over there, but no matter what we do, it's not going to change anything. Sure, we'll be able to pick off a few Al Queda in Iraq guys while we're there, but then we have to fight the other Sunni folks who want to kill the Shia, and then the Shia who want to kill the Sunni. Being in the middle of a civil war is about the worst place our troops could be.

Do you suppose that Dick Cheney has to practice his "evil sneer" faces in front of the bathroom mirror, or is he just naturally gifted?

Just wanted to tell you how much I enjoy your site. Especially like the non-football stuff. Always fun to read.

Keep up the good work.

On the contrary, you should definitely stick to football. If I wanted to read incoherent liberal rambling, I'd go to DailyKos.