Farewell to a true playa. 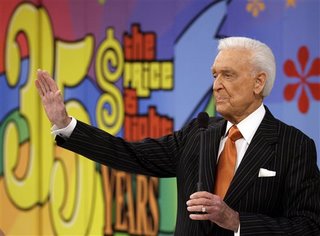 Bob Barker doesn't actually know a single pick-up line; he picks up women with his mind.

We all knew this day would come eventually, but it still stings: Bob Barker will be retiring in June after a half-century in television.

I've mentioned before how much I love "The Price is Right," and it all boils down to Bob. Bob Barker is a pimp, it goes without saying, but did you know he was also a fighter pilot in the Navy? That he's a vegetarian whose charitable foundation gives millions of dollars to animal-rescue and park facilities all over the country? That he has appeared in episodes of both "Futurama" and "Family Guy"? That by renouncing hair dye in 1987 and going naturally gray, he became a trendsetter for other celebrities like Monty Hall and Alex Trebek who would later do the same thing? I think someone needs to put together a Web page of "facts" about Bob Barker just like they did for Chuck Norris.

Bob Barker has served as a body double for George Clooney in "Out of Sight" and Brad Pitt in "Mr. and Mrs. Smith."

To support himself in Los Angeles before he started getting regular TV work, Bob Barker was a professional boxer. His record is 142 victories, 0 losses, 109 knockouts, and 13 deaths.

Bob Barker is banned from entering 17 counties in the U.S. and six countries worldwide because authorities fear the effect he has on their women.

Not only did Bob Barker once land a 747 full of Third-World orphans after the pilot and co-pilot had both become incapacitated, he did it with a blood-alcohol level of .21.

Anyway, I loved this quote from his retirement announcement:

To kick off his retirement, Barker said he will "sit down for maybe a couple of weeks and find out what it feels like to be bored." Then he plans to spend time working with animal-rights causes, including his own DJ&T Foundation, founded in memory of his late wife, Dorothy Jo, and mother, Matilda.

He said he'd take on a movie role if the right one came along, but filmmakers, take note: "I refuse to do nude scenes. These Hollywood producers want to capitalize on my obvious sexuality, but I don't want to be just another beautiful body."

So now the question becomes, who will replace Bob? I think the only person who can even come close to Barker's pimptitude is Larry Munson. If you knew anything about Munson's Movie Group, I think you'd agree. 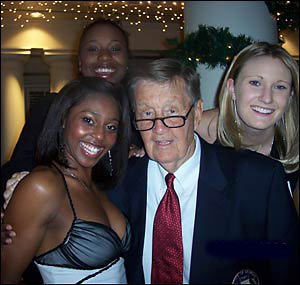 Munson: Also a total master at Plinko.
Posted by Astronaut Mike Dexter at 8:32 AM

Email ThisBlogThis!Share to TwitterShare to FacebookShare to Pinterest
Labels: pimping is actually quite difficult, TV

Totally. I love it. Nice Halloween pics too! My friends and I were going to go as the cast of arrested development, but then realized we'd still pretty much look the same as we always do.