Now that I've spent the past few days discussing how the United States House and Senate have been wrested back from Republican control, it's time to address another reclamation project -- the Georgia Bulldogs, who at 6-4 are pretty much where the Democrats were around this time in 2004.

But there is hope. 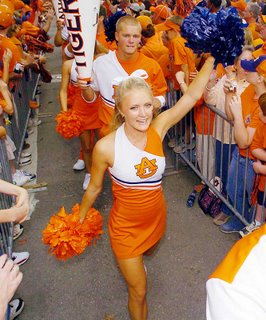 This is Krista Klumpp (no relation to the Nutty Professor), cheerleader at Auburn University and SI.com's Cheerleader of the Week. In case you've been keeping up with Hey Jenny Slater's weekly CotW updates, the record so far for schools who've had a cheerleader selected by SI: Alabama, lost to Arkansas the very next week; Georgia, blown out by Tennessee; UCLA, whacked by Oregon; then Wisconsin and Ohio State, both taken to the brink by lowly Illinois. Fifth-ranked Auburn's opponent this weekend? The Georgia Bulldogs.

At the very least, we can cover a 13-point spread this weekend. Come on, guys! Karma is with you!

I'll be down at the game tomorrow morning, for the 10th year in a row, and I expect it's gonna feel a little weird witnessing Georgia-Auburn at an 11:30 a.m. kickoff rather than 2:30 or sometime after the sun has gone down and everybody's gotten good and hammered. But in spite of everything that's happened this season, I'll still have hope. If this past week has taught me anything, it's to have hope.

Your Ten in the comments, and what the hell, your post-election gloating if you choose to participate in such.
Posted by Astronaut Mike Dexter at 8:12 AM

To Hell With Good Intentions-McLusky

Bonus- What ever the Rutgers fight song is!

You have to admire that Klump girl's spirit and not just her cheerleading spirit. I mean, to cheer with one leg is an amazing feat. I am surprised that ESPN hasn't done a story about her yet. Maybe they were turned off by the obvious tan-in-a-can orange tint to her skin.

"I'll be Around" The Spinners

"The Killing Moon" Echo and the Bunnymen

"The Road" The Alarm

I seem to remember Amy Poehler playing her once on SNL. It was their sendup of "The Swan," if memory serves.

Geez, Doug, I should have known Auburn would have the cheerleader of the week this time around. Georgia's up 24-0 right now. The curse is holding.

Not only does the Curse live, but it carries an extraordinary wallop - Doug you must be in Nirvana!