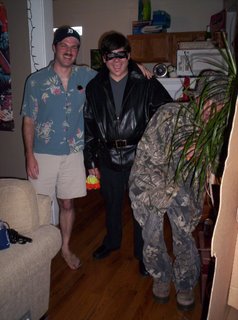 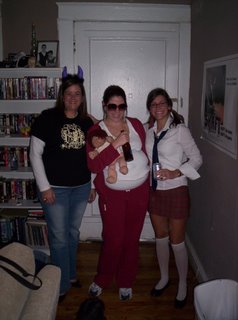 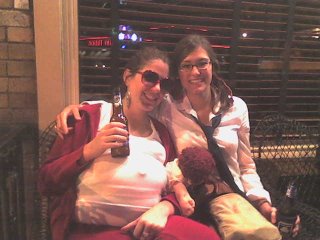 Ann's Pregnant Britney costume was the unqualified hit of the evening, and together with Kela they made a nice Britney Before/Britney After pairing. But maybe the best moment was while we were sitting outside at Dave's and a dude walked by who was going as Kevin Federline. Naturally, we had to get a picture of him and Pregnant Britney together. 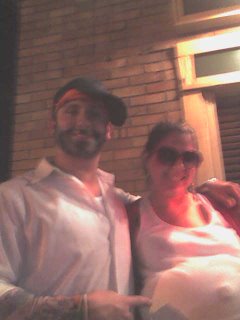 Awww. (Sorry for the quality of the picture; cell-phone camera and all that.)

Anyway, I don't remember a lot of what happened Tuesday night, but I do remember being yanked onto the dance floor at Bailey's by a girl dressed as a nun. And it seems like I remember her telling me she was married. I don't know; it's still kind of hazy.

· The Cocktail Party this past weekend down in Jacksonville may not have turned out the way we Georgia fans wanted -- yet again -- but at least Josh took the opportunity to come up with the greatest tailgate sign ever: 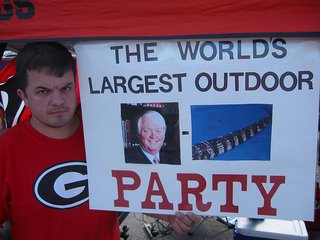 · My new favorite ad campaign is Holiday Inn's "three business guys" series. Those ads perfectly capture the banter of regular middle-class white dudes and their occasionally desperate attempts to find something cool in otherwise boring lives, and the pitch is absolutely perfect -- "Look, we know you've got a million things you'd rather be doing than going on some boring-ass business trip and staying at a chain hotel, but we recognize your angst and think you're cool anyway." As an example, here's the "cage fighter" commercial, my personal favorite.

Other great ones: "Hot Tub" and "Joe's Throat."

· Speaking of ads, the Dr. Scholl's "Are you gellin'?" ads are quite obviously a significantly less successful attempt at glamorizing middle-class white dorkiness, but a dude on CollegeFootballNews.com pointed this out a while back and I think it bears repeating: At the end of the "gellin'" ad that takes place at the wedding, this one guy says "I'm gellin'" while he's dancing, albeit in typical spastic white-guy fashion, with this smokin' hot chick; his two so-called "friends" proceed to tell him he's "so not gellin'." Let me get this straight: A guy who's actually getting his mack on with this hot blonde is not "gellin'," but two guys standing around going on and on about their insoles are? If that's the case, then the standards for "gellin'" have been debased to the point of meaninglessness. I know gellin', I worked under gellin', gellin' is a friend of mine, and you, sirs, are not gellin'.

· The water-cooler talk at my office yesterday centered around the absolutely piss-poor performance given by John Saunders, Doug Flutie, and Craig James as booth announcers for the UAB-SMU game on Tuesday night. I haven't TiVoed the broadcast and taken down hard data, but my rough estimates are that the three of them spent 20 percent of the game making references to how James once played for SMU, 10 percent covering extraneous bullshit like the Big Mac equivalent of a player's daily caloric intake or how this other player likes to go hunting, 25 percent talking about the BCS and BCS-conference games with big implications for same, 30 percent making jokey comments about what a meaningless game they were covering, and maybe only 15 percent actually covering the game itself.

You know what, ESPN? If you think a game like that is so silly and irrelevant, don't insult the collective intelligence of UAB (and SMU) fans by devoting a prime-time midweek slot solely to ridiculing it. A program like UAB may eat up any national TV exposure it can get, but given the choice, we'd rather schedule a game on a Saturday afternoon like everyone else and leave it to CSS or the pay-per-view folks than listen to a bunch of hacks act like the morning radio zoo crew and talk shit about our program for three and a half hours. If that's the best announcing crew you can devote to a game like that, perhaps it's time for you to scale back the number of games you televise until the number of games is equal to the number of qualified announcing teams you can assign to them. We CFB fans may ridicule the Lincoln Financial announcing teams on a regular basis, but I will say this for them: No matter what game they're covering, even if it's flippin' Ole Miss-Vanderbilt, they never act like the game is a waste of time or that it's some big joke that they've graced with their presences just to pick up a paycheck. So what excuse do Saunders, Flutie, or James have?

· EDSBS has a terrific series of "campaign ads" from various conferences lobbying to get a team into the BCS national-title game. Here's the SEC's controversial opening salvo, followed by a searing rebuttal from the Big East, and then "everybody else" jumps on media darling Notre Dame. The final month of the season is going to be one vicious homestretch, that much is obvious.
Posted by Astronaut Mike Dexter at 10:40 PM

Doug,
Have you noticed that when you were all politics, Georgia was friggin' awesome and we Democrats were sucking wind big time?

And now, your talking all Georiga and no politics, and we Democrats are at least looking somewhat competitive, while Georgia is sucking wind?

Keep up the good work!! Go Georgia!! Shit, I'd root for Miami if it helps our chances at the polls next week....errr, ok...maybe not.

Oh, and I want to marry Kela.

Can't really blame ESPN for sucking during the SMU/UAB broadcast.

I've lived in birmingham for a hair short of a decade and I couldn't come up with an hour of good content about UAB.

It's pretty clear the game wasn't worth talking about. I could talk about Darrell Hackney for hours though. It's a damn shame he had to leave.

I think I got caught up in the Flava of Love Reunion that night. Spellbinding television.

I love broadcasts that get so ridicoulously bring that by the end of the game the commentators are trading recipes for corn chowder. I remember watching a University of Tennessee at Chattanooga game once where, while Terrell Owens was flying down the sideline on his way to the endzone, the commentators were LITERALLY trying to decide what to eat after the game.