Friday Random Ten: And on the twelfth weekend, I rested.

For the first time since August, Georgia is going an entire weekend without playing a game. Any other day I might be bummed about this, but after 11 straight weeks of probably the most tumultuous season of the Mark Richt era, I'm actually kind of glad for the breather. This weekend I can just kick back, polish off a few Stellas, and take in everybody else's thrill of victory/agony of defeat without having to get too emotionally involved myself.

I know the OMG Biggest Game Evar this weekend is Michigan-Ohio State, but with all due respect to a Buckeye-fan commenter I'll get to in a minute, down here in Alabama, we only just found out the Big Ten was in Division I-A a few years ago. And I wanted to share with you the experience of a very close friend of mine from college, who for reasons too complicated to explain went to the Wisconsin-Iowa game in Iowa City this past weekend. Based on this experience, she says she finally has empirical proof that the Big Ten has nothing on the SEC when it comes to tailgating or anything else. Our girl on the scene points out thusly:

· Iowa has two majorettes. One of them is a dude.

· Most of the music in the stadium was piped-in shit like at an NBA game, not the marching band. Which was probably fine because Wisconsin didn't bother to send their band, not like Iowa isn't about the closest school in the Big 10 from them. Still, I don't approve. If I wanted to hear multiple playings of the first 15 seconds of Ozzy Osbourne's "Crazy Train," I'd go to a fucking Atlanta Braves game and wait for Chipper Jones to bat. This is supposed to be college football.

· Remember how we used to go to the Miss Georgia pageant every year and joke that the girls in the audience were all dressed as if, just in case, there would be an off chance that Miss Magnolia Midlands would, like, sprain an ankle or something and they'd have to pinch pageant? Full hair, full makeup, prom attire, the works? Ridiculous. Well, the same goes for Big 10 football. I know those lazy bastards don't find it necessary to dress or anything for a football game, so I was prepared to see a ton of people in sweatshirts. No biggie. I was wearing one myself -- when in Rome and all that. Here's what I was not prepared for: the number of people who were not just wearing sweatshirts, but sweatPANTS too, That's the kind of thing that doesn't show up on TV. Wow. All I can say is, wow.

· Iowa fans were booing after dropped pass No. 2. Unbelievable. First off, no Georgia fan would even NOTICE there was a dropped pass trend until about No. 5 or No. 6, that's how bad we are. And I'm not going to sit around and pretend Georgia fans never boo their own team, but people get really mad about it when that happens. Booing your own team is a total no-no in the SEC. (With one huge, orange-and-blue jean-shorts wearing exception in the University of Florida, whose fans are uncouth fistfuckers who aren't even Southern except in the geographical sense of the word and deserve all the booing they heap on their team. So they'll boo at the Swamp. But then again, no one likes them.)

· Neither team appeared to have a kickoff cheer (like "Go Dawgs, Sic 'Em" or "Roll Tide, Roll" or "War Eagle Hey"). . . . Wait, I take that back. When Iowa was receiving, but not kicking, the loudspeaker would play a few seconds of the Rolling Stones' "Start Me Up." Which would be totally bitchin' if I was watching a commercial for Windows 95. But I complained already about the music, so now I'm just piling on.

· You know how on a big third down usually the defense will lift their arms as if to tell their fans, hey, you lazy fucks, how about standing up and cheering for us on this big third down, it's the least you can do while we're out here getting our faces pounded? And then everyone does stand up. Both Iowa and Wisconsin were doing that. Only students responded, though. And not even all of them.

So overall I was not impressed. I'm not saying the SEC experience is better, not by any means. All I'm saying is, I'm about done hearing Big 10 folks -- who have never been to a game in any other conference -- talk all day long about how they're the only ones who know how it's done. Shenanigans. That's what I'm calling. Shenanigans.

Wow. Harsh words, I know, but still, it makes me feel more assured in thinking that the biggest game of the weekend, at least in my little corner of Dixie heaven, is still Auburn-Alabama. Yeah, this game hasn't had national-title implications in years; lately the only implications it's had is which coach is going to need to be updating his résumé over Thanksgiving weekend. But be that as it may, when I walk into my office on Monday, half of the people there are going to be suicidally depressed and the other half are going to be the ones driving them to it, and Bama-Auburn is going to determine who's who.

Anyway, I've slagged on the Big Ten enough, and in all fairness, Michigan-Ohio State is a pretty big game (in case that fact wasn't drilled into your skull enough by ESPN over the past month and a half). I should probably show more gratitude than that, especially given that one of my commenters who is an avowed Buckeye fan threw in a contribution to the whole Scarlett-Johansson-in-a-Hooters-uniform thing, which appears to be very close to taking on a life of its own: 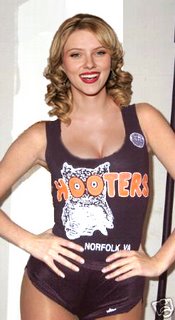 As Borat would say, great success. Kudos, Buckeye. Maybe we'll make this a weekly Photoshop contest like they do on Fark.com. What's next? Jenna Bush in a Playboy bunny costume? Sky's the limit.

Anyway, enough of that. The Ten:

Your Ten(s), big game predictions, off-color rants, and whatever else in the comments. Dzienkuje.
Posted by Astronaut Mike Dexter at 8:11 AM

Is "Borat" going to set a record for fastest really-funny-to-moderately-funny-to-overused-to-downright-fucking-annoying transformation? Because it's only in its second week, and we've already hit "overused."

About a week ago.

And I loved the movie, actually.

How about a image of the SI Cheerleader of the week, with Michigan as their target? Call the curse into effect, just to make sure O-H-I-O gets a victory? Not enough cleavage in that? OK I have Jenna in a bunny suit...with her own cleavage, no less? Want it?

Dude your friend really shouldn't judge ALL of Big Ten football until she's been to Ann Arbor or Columbus. The atmosphere is more on par to the SEC and Big 12. Not up to par, but closer. Like more cheers and more band, but still with the sweats. It's cold here.

This site is the number one google search result for "Scarlett Johansson in a Hooters uniform". In doing so, it ranks right above such quality sites as The Washington Post, All about BUTTS and Drunk at Timekiller.

Just thought you should know about this important milestone.

If the game had been in Madison, it would have been a different experience. C'mon, it's freakin' IOWA!?!?!?!

Glad some other reasonable type chimed in, 'cause I had similar thoughts. The Alabama/whoever game that I attended with B was fun, but the sight of the frat boys and serority types in jackets and ties, and cute dresses, respectively, was freaky - I mean, this is a football game!! The Go...o..o..o going into kickoff was inspiring, but so is O-H at the top of one's lungs, with I-O coming back from the other side of the stadium. Tailgating was awesome, even when the game was against some AA team at the beginning of the season (can't afford tickets any other time of the year! It's over $800 per year for one student season's pass - they take it all seriously - it's football!!)

That last part was referring to when attending a real football game, big 10/OSU - my context got sloppy! Have no idea how much it costs for student tickets at 'Bama!

Okay, don't be stepping to the Big 10 with no evidence to back up serious claims of shenanigans. Iowa is the Big 10 in name only. It's not the real Big 10 experience.

I have spent 7 years at Big 10 schools, 6 years at ACC schools, and 2 years at an SEC school. In my experience, Big 10 tailgating and the band were much better than anything I EVER saw at SEC or ACC games. And, I never saw people at Big 10 games in sweatpants and/or shirts. I'm not saying, I'm just saying.

And, Wisconsin only sends their band to one Big 10 away game per year (this year, Michigan) due to funding. Please don't say anything--I can't afford for the school to up my "already-paying-24K-per-year" tuition.

And, let me say: After their loss today, maybe Chuck the Chest at NC State will finally get fired.