Blogpoll ballot #13, and some other crap. 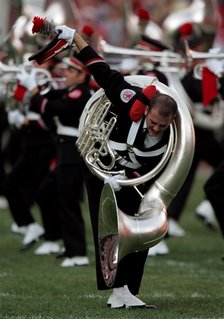 With no Georgia football this weekend to entertain (or horrify) me, it was a relatively relaxing Saturday, one I spent on the couch polishing off a half rack of Dreamland ribs whilst flipping back and forth between the Iron Bowl and the Ohio State-Michigan game. Both underdogs scored first, only to see the favorites storm back for a win; I probably felt sorrier for the Alabama fans, if for no other reason than because I know what it feels like to have Auburn fans relentlessly bugging the shit out of you (though they won't be doing much of that to me for the next 12 months, heh heh). But I also felt a little bad for the Michigan folks, in an "I wish both teams could've won" kind of way, as wishy-washy as that sounds. I mean, a classic like that, where both teams are so clearly playing their asses off . . . hate the fact that anybody has to lose at all, is what I'm saying.

Partly for that reason, my top two teams remain the same from last week's Blogpoll ballot to this week's: Ohio State is still #1 and Michigan is still #2. I could've dropped the Wolverines, and I'm sure plenty of people did, but unlike most times when a top team loses, I didn't think dropping them was a necessity in this case. Can you confidently say that any other team in the country -- Southern Cal, Louisville, Florida, whoever -- would've played Ohio State that close under those circumstances? One loss or no, is anybody better than Michigan right now other than Ohio State? I played out a bunch of different scenarios in my head and couldn't find any -- and apparently both the sportswriters and the computers agree with me.

But, and here's the paradox: I don't want to see a rematch of this game. Michigan may still be the second-best team in the country, but the fact is they had their chance, they lost (even if it was close), and that, to my mind, is that. Michigan was +3 in turnovers, they scored 39 points, and still didn't get the W; I think Ohio State's superiority has been conclusively established here. So it's time to give someone else a chance for the national-title game. I've got ideas about who I think that someone should be and who it shouldn't, but I don't want a rematch.

Anyway. Here are my rankings.

Games watched: Part of Ball State-Toledo (it was Tuesday, I was bored), West Virginia-Pittsburgh, parts of Boston College-Maryland, flipped back and forth between Auburn-Alabama and Ohio State-Michigan, rotated randomly through USC-California, Virginia Tech-Wake Forest, Washington-Washington State, and Cincinnati-Rutgers.

4. Arkansas (3)
Not exactly a world-afire-setting performance against Mississippi State, though it's not like they needed one. I didn't drop them a spot because of that; I think my guilt over having them above a team that dropped 50 points on them finally caught up with me.

8. Wisconsin (12)
The Badgers have to be pissed about the rule saying a conference can't put more than two teams in the BCS. Instead they get to play in the Capital One Bowl again.

10. LSU (7)
Unlike Arkansas, I did drop LSU for a lousy performance in a win. Good God, what are you doing getting taken to OT by Ole Miss? In Tiger Stadium?

14. Rutgers (5)
I understand about letdowns, guys, but there's get-played-close-all-game-long-and-get-punked-at-the-end letdowns and then there's never-in-the-game-for-even-a-second letdowns, and this was the latter. And it doesn't get any easier next week, because even Syracuse is good enough to beat them if they're looking ahead to West Virginia.

20. Virginia Tech (23)
Very nice win against Wake Forest. The Hokies will be dangerous next year.

· Kirk Herbstreit is one of my favorite guys in sports, but when I heard that the former Ohio State QB was going to be in the booth for the OSU-Michigan game, I smelled a rat and poised my finger over the "shenanigans" button. But I'll say this for Herbie: He did a great job of keeping whatever biases he might've had bottled up and calling a very clean game. He praised Michigan when they did something good, and (perhaps to a lesser extent) he criticized Ohio State when they screwed up. So props to him for that. I still think it's pretty sketchy when former players or other alums of a school are in the booth for a game that school is playing in, but Herbstreit showed how to do it right. Class act. 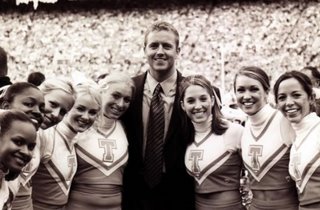 Plus the ladies love him.

· Wish the same could be said for some of Ohio State's fans. I know I'm not the first one to ask it and I know I won't be the last, but what is it about a win like this that makes certain people think, "You know, the best possible way to celebrate this victory is to turn over a car and set some stuff on fire"? I'm not going to sit here and say Georgia fans are as pure as the driven snow, but the worst we've done of late is trying to rush the field too early when we finally beat Tennessee back in 2000. For even the biggest games -- winning the SEC title back in 2002, finally beating Florida in '04 -- we participated in very little that would qualify as "vandalism," much less "arson."

· So here's what it looks like in the Big East: Everybody has at least one loss. Louisville has Pittsburgh and UConn left, both of whom they should beat without much trouble. Rutgers has Syracuse, whom they should, and West Virginia has South Florida at home before RU and WVU meet up on December 2. So if everybody beats whom they should beat before then, and WVU wins, then Rutgers has two losses, Louisville has the tiebreaker over the Mountaineers, and Louisville is the Big East champion. If Rutgers wins, they have the tiebreaker over Louisville, and they're the Big East champion. I think. But apparently that means WVU is all but out of the race regardless. Weird.

· OMG SPURRIER TO MIAMI! True? Probably not, but that doesn't mean it ain't fun to watch the Gamecock fans squirm. And I gotta say Spurrier doesn't look like the happiest cat in the conference right now. At various points this season he's called out the refs (twice), his own players, even his own coaches, pretty much everybody but the grounds crew at Williams-Brice Stadium -- all in all a guy who's showing all the signs of being really upset at where his life's path has taken him. 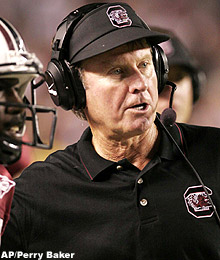 When your job has you looking this Tom Coughlinesque, it's time to admit things didn't turn out the way you thought they would.

· Finally, Jason Campbell's line from his first start for the Washington Redskins: 19-of-34 for 196 yards, two TDs, no picks, and five rushes for 11 yards to boot. Efficiency rating for the game: 92.3. Yeah, they lost to Tampa Bay, but while the season may be a disaster, it's no longer a complete disaster. Kudos, Mr. Campbell, and I'm sorry I doubted you. Just please try and win, you know, maybe a couple games down the stretch. 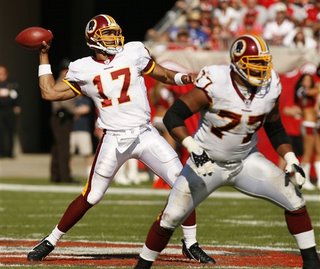 I suppose I can get used to this.
Posted by Astronaut Mike Dexter at 10:05 PM

See I don't think that was a bunch of Ohio State fans setting fire to cars. Just confused/drunk Detroit-area fans.

I thought the same thing about Herbstreit when I heard him in there. I also called a bit of shenanigans for having Tony Siragusa on the sidelines of Sunday's Falcons/Ravens game.

If you don't want a rematch, why did you rank Michigan No. 2? Or, put another way, why would you want a national championship game without the top two teams?

...at least having Tony Siragusa hanging out on the sidelines is only like watching some drunk ramble harmlessly around - who is paying attention to what he says - complaining about the rain?