Roundtable #6: This is my dance, y'all, Humpty Hump's my name. 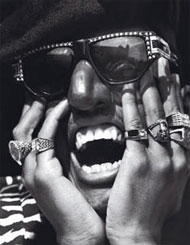 Just grab 'em in the biscuits.

As a participant in the Blogpoll, I'm now eligible to start/host one of those roundtable thingies you've probably noticed on here from time to time. And after making the requisite checkup call to make sure I hadn't been incarcerated for destroying public property in the wake of Georgia's loss to Kentucky, Blogpoll founder Brian invited me to host one. So here are a handful of questions relating to the current almost-completely-baked 2006 season and some other stuff -- all you Blogpollsters out there, I'll be looking forward to your answers, and I'll have a roundup post of those answers on here sometime next week. Fair warning, anyone who makes fun of the Bulldogs' current struggles in any of those answers gets reported to the NSA for supporting Islamic terrorism through their blogs. OK then! Let me hear a little bit of that bass groove right here . . .

1. We're just a few weeks away from the end of the regular season, so everybody should have a pretty good handle on how good their teams are and what sort of records they can expect to finish with. Looking back over the season, which was the game where your team really defined itself in 2006, for good or ill? Or to look at it another way, which game, win or loss, was most representative of your team's attitude and style of play this season?

Embarrassingly, for Georgia I think it was the Colorado game on September 23, in which we entered the fourth quarter trailing one of the country's worst offenses 13-0 and had to engineer two late TD drives to escape with a win. At the time, a lot of people were hoping that it was just an early, isolated near-bedshitting, but it turned out to be humiliatingly portentous for a team that has fallen off dramatically from 2005's SEC-title-winning group. All the signatures of the Dawgs' later performances were visible against the Buffaloes -- looking terrible against supposedly easy opposition; giving only 30 minutes' worth of effort as opposed to the customary 60; Charmin softness on defense; an offense that looked spectacular at some moments and short-bus inept at plenty of others.

I've had discussions with more than one fellow Georgia fan speculating that it might actually have been better in the long term if Richt had just left the struggling Matt Stafford in that game (as opposed to yanking him for backup QB Joe Cox, who threw for both fourth-quarter TDs) and lost. For one thing, sticking with Stafford might've neutralized some of the QB controversy that arose when Joe Tereshinski returned from his injury; for another, it would've disabused us of any notion that we were a competitive team and possibly prepared us for subsequent losses to Vanderbilt and Kentucky. Conversely, it might've woken up our players (and coaches) to the point where they actually put away those teams. But I guess it's all spilt milk now. 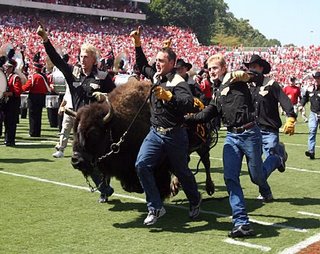 Maybe shoulda just gone ahead and let Ralphie run over us.


2. Are there any teams you think are still hugely overrated? What about underrated?

Unlike the coaches, I'm not prepared to anoint Louisville a top-three team just yet -- I certainly don't see how you can say they're better than Texas at this point, win over WVU or no -- but I do have them ranked at number five in my own ballot, so maybe they're not that overrated. I'd say USC is probably still a little high at #7 in both polls, considering that they lost to unranked Oregon State and really don't hold any substantive evidence that they'd beat California at this point.

Underrated: Wisconsin. Their offense doesn't quite blow my skirt up, but their defense is as good as anything they had during the Barry Alvarez days, and they look like a very good candidate for finishing the season 11-1 and sneaking into an at-large BCS berth.


3. Did your team play any Division I-AA opponents this year? If so, do you think it benefited your team at all? If you were a coach or an NCAA official, what policy would you have toward scheduling D-IAAs?

Georgia played I-AA Western Kentucky for their season opener, something I wasn't all that thrilled about. On the one hand, we did get some early actual-game experience for our stable of wet-behind-the-ears QBs, but in the end I don't think it was that valuable, since a defense like WKU's really isn't any kind of useful yardstick and the game clearly didn't end up resolving the QB situation to any degree. Would it really have been all that difficult to get a I-A on the schedule, even somebody like Ball State or UNLV?

I kind of like the family reunions Georgia throws every few years with Georgia Southern -- it'd be especially fun now that our former DC, Brian VanGorder, is GSU's head coach -- but if the NCAA came out tomorrow and banned I-As from scheduling I-AAs altogether, I don't think I'd shed too many tears. If I was writing the rules I'd allow I-As to schedule one AA every five years, not to exceed two games in any given 10-year period, but that'd be it. Seriously, do coaches and ADs not feel even a little shame calling these guys up to get them on the schedule? 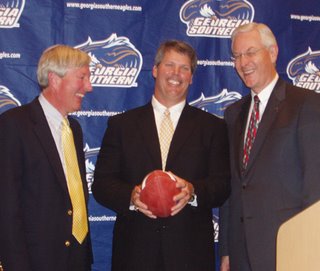 Only danger in bringing BVG back to Athens for a game is that many of us would be tempted to not let him leave.


4. Which not-a-typical-national-powerhouse team (i.e. no Ohio States or USCs) has played well enough this year to set themselves up for a breakout season in '07?

Rutgers and Missouri are the first two that pop into my mind -- both of them have achieved surprising success this year with teams that are much younger than a lot of people realize. Since Rutgers' success has been faster and more dramatic this season, I think I'd be a little cagier betting on them since they'll be that much more vulnerable to a potential letdown season, but they'll still be pretty good, I think. Missouri is not only a more balanced team than Rutgers but they also play in a very flaky division (the Big XII North) that they should be able to run through in 2007 if they play their cards right.

Another team that could be poised to regain past greatness in 2007: the stormin' Mormons of Brigham Young. They haven't lost since an OT defeat at Boston College on September 16 and, like Rutgers and Missouri, have done it with a relatively young team. Bronco Mendenhall is doing two things Lavell Edwards always did at BYU -- recruiting well and putting up big offensive numbers -- and since a Mountain West title is almost a slam-dunk for them at this point, that could set them up for potential BCS-buster status next year. 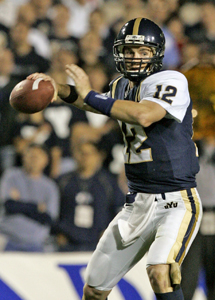 John Beck: You can call me your fool, I only wanna go to BYU.


5. Take a look at your team's bowl prospects this season. Which bowl(s) do you think you have a reasonable shot of ending up in? Of the teams you might likely face in a bowl, which team would you most want to play and why (maybe you've always wanted to see how your team would match up with them, maybe there's an old score you want to settle, or maybe you just want to finish the season with an easy win)? Conversely, which potential opponent would you really like to avoid in a bowl game?

Paul Westerdawg has done some terrific work analyzing Georgia's possible bowl scenarios this year (assuming we accept a bowl invite at all, which more than a few people are already recommending against). Now that we've lost to Kentucky and have no reason to expect anything better than a 6-6 finish, it looks like we're headed to either the Independence or the Liberty; an upset against Auburn or Georgia Tech might upgrade that slightly, but not enough to make a huge difference, not that I'd be counting on it in the first place.

If we went to the Independence Bowl, we'd play the #7 selection from the Big XII, which looks like it'd be either Texas Tech or Kansas State; in the Liberty Bowl, we'd play the Conference USA champion, which would probably be either Houston or Tulsa, since none of the Eastern Division teams really seem to pose much of a threat for the conference title. Given the struggles our secondary has been having for months now, I'd prefer not to have to face the passing attacks of TTU or Houston; if I could have my pick of any of those opponents, it'd probably be K-State. They're in a major conference, we might actually have a fighting chance against them, and a Georgia win would give Ian Cohen the opportunity to write another undoubtedly hilarious post slamming Ron Prince.


6. In a roundtable question during the off-season, we were asked whom you'd pick if your current coach fell deathly ill and you had to select another coach to lead your team to victory. Let's turn this around and imagine that you've somehow schemed your way onto the search committee to select your biggest rival's next head coach. Which rival would that be, and which coaching sooper genius would you try to stick them with?

Well, first of all the school would be Florida, obviously. And what better albatross to hang around the necks of a bunch of people still secretly pining for the return of Steve Spurrier than the homeless man's Steve Spurrier himself, New Mexico State head coach Hal Mumme? Mumme would probably stumble through a few completely defense-free campaigns in his first few years in Gainesville, but would get a reprieve from a Florida fan base that's just thrilled to be putting up 50 points per game again -- too thrilled to notice that he's playing fast and loose with NCAA bylaws and running off all the Muslim players. By the time they come to their senses, Mumme's pile-drived the program into four-win irrelevance, leaving nothing but a mountain of sweat-soaked neck towels to remember him by. Ron Zook will look like fucking Rockne after four or five years of the Mumme's Curse.

Tunnel screen trips right 989 zip left milk milk lemonade around the corner fudge is made, on three! And somebody get me another towel!
Posted by Astronaut Mike Dexter at 12:15 AM

Nice questions Doug. Our answers are up here.

My responses are up here.

Another bitter Hawkeye fan weighs in.

The Dawg Sports answers are up and running, complete with gratuitious Kristin Davis pictures (and parenthetical political swipes at Doug).

Thanks for hosting. Off Tackle responds here.

The MZone has posted their responses. Thanks for hosting.