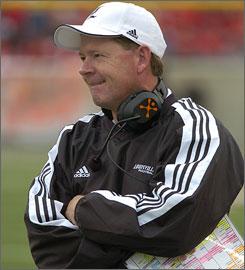 Well, forget everything I said about Alabama hiring Bobby Petrino as their new head coach: I heard on the radio this evening that Petrino has said he isn't interested. Neither are the two guys I'd heard Tide fans (laughably) offering as their top two candidates, Steve Spurrier and Nick Saban. Apparently neither are Rich Rodriguez (not surprising) or Wake Forest's Jim Grobe (slightly more surprising), and former Texas/Auburn DC Gene Chizik has been snapped up by Iowa State. Just two days after Mike Shula's firing was formally announced, the pool of qualified candidates has already shrunk to microscopic size.

The next candidate I'd offer up as somebody Alabama needs to go after is former USC and current Tennessee Titans offensive coordinator Norm Chow, but honestly I don't know if he'd fit what has become a major requirement for the team's next coach: What Alabama really needs at this point is someone who, unlike, say, Dennis Franchione, sees the Bama job as the one they've always wanted and will do whatever it takes to bring the program back to national prominence. But what big-name coach right now really feels that way about this job? I was talking with two co-workers about the situation yesterday, office manager Cindy and fellow Georgia grad/closet Bama fan Stanley, and they both agreed that every time Alabama jerks its knee and yanks a head coach, it makes the job significantly less attractive for every other coaching prospect out there. And they both liked the metaphor I used right after that, so I'll mention it here: Alabama is like a really hot chick who's also a total bitch and can't figure out why guys don't want to date her.

I mean, on paper, the Alabama job should be the greatest job in college football: You've got tradition a mile long, a brand name recognizable even to people who couldn't give the first shit about college football, a fertile recruiting base, top-notch facilities, a fan base that's as passionate and motivated as any in the country. But like the hot chick who's also a total bitch, Alabama treats all its coaches-slash-dating-partners like crap. Lose one game and people are already talking about how you can't hack it and who your replacement should be. You're expected to recreate the kind of dynasty that Bear Bryant built, which in this day of scholarship limits and a bigger, more competitive SEC probably isn't even possible anymore. Is it any wonder that, to guys like Spurrier and Grobe, formerly moribund programs like South Carolina and Wake Forest look incredibly inviting? Win eight games in Columbia or Winston-Salem and they're bringing you 72 virgins and the finest meats and cheeses from throughout the land. Win eight in Tuscaloosa and the attitude is, "Well, OK, but you better do better next year."

In the decreasingly likely event that Alabama does manage to hire a big-name (or even temporarily-trendy-name) coach, they need to hang on to him like grim death. They need to grit their teeth and survive a few six- or seven-win seasons if that's what happens, because even if you concede that a Bear-Bryant-like dynasty is still possible -- which, for the record, I don't -- you must recognize that building one is gonna take a lot more than five years. Rich Rodriguez went 3-8 his first year at West Virginia and didn't bring home the Big East title until his fifth year on the job. Frank Beamer, a name that gets brung up like clockwork every time Alabama needs a coach, won two, three, six, six, five, and two games in his first six years before finally breaking through to a bowl in his seventh. A guy like Beamer is never going to be any good without the patience that was shown to him while he was struggling to turn VT into a competitive program.

I know I've been harsh on Alabama here, and I don't mean to sound that way; I like Alabama, I definitely fall on the crimson side of the Bama-Auburn rivalry, and I'm one of those people who just thinks there's something somehow better about college football when the Tide is good. But good Lord, people, it's time to man up and realize that after Mike DuBose, Dennis Franchione, the Mike Price debacle, and not one but two major NCAA violations, the reconstruction of Alabama into a national powerhouse is not a three-year job. It may not even be a five-year job. Hire someone who has that kind of patience, and then do him a favor by having that same kind of patience with him.

And you know, David Cutcliffe made a pretty decent head coach too, now that I think about it. I'm just saying.
Posted by Astronaut Mike Dexter at 7:53 AM

Okay that's two words. A name, in fact, of a solid, solid coach who is going to be in Alabama (Mobile) on January 7. Take a hard look at what he has done at lost-in-the-woods Nebraska and nowhere-on-the-map Ohio.

Unconventional? Yep. But the fact of it is that Solich will be able to win early and often without top-flight talent. Sure, it will be running a somewhat hard-to-get-used-to triple option, but please tell me that a scheme is harder to get used to than a losing streak in front of a fickle fan base.

Think about it. Reject it outright, and then think about it one more time. A coach with a .700+ winning record in Division I, including a better than decent stint at a program very similar to Alabama, might be worth at least a look-see.

He'll have to have ironclad commitment from the administration that he's got a real 6-year job, not a contract that'll be yanked after season 3.

You are missing the perfect candidate: Jerry Glanville. He and Alabama go together like bass fishing and twelve packs of bud.

PS: See you in the ATL! Go Hokies!

OK, Why should shula suffer for Moore's bad decisions. He is the one that has selected all the coaches in last decade. Why is the school not looking to replace him?

Right, like someone could find 72 virgins in South Carolina.

Sorry. If Solich couldn't cut it at Nebraska, there is no way he would make it at Bama. Nice thought, though.

I figure Cutcliffe is waiting the 3 or 4 years until Fulmer retires, then looks to slide into the drivers seat at UT, but I could be wrong.

Chow? Dude, he's a 62 year old asian morman with no southern college ties beyond 1 year at NC State. A guy who coached at BYU for 20 years...most of them as Lavell Edwards' OC, and when Lavell retired wasn't given the job.

They're going to end up with Riley or Cutcliff if they don't get their act together soon.