It's the week before Thanksgiving, and you know what that means . . . well, maybe you don't know what that means other than turkey overdose and take-no-prisoners Christmas shopping, but if you attended Georgia or Georgia Tech you do: It's the week of Clean Old-Fashioned Hate, the now going-on-113-year-old UGA-GT rivalry. It may not be the nastiest rivalry in the country, it may not be the one most national-title-implication-fraught, but it's certainly one of the most interesting: Very few rivalries match up schools of such vastly different personalities. Sure, Georgia people talk mountains of shit to Tennessee kids, Auburn kids, Florida kids, etc. etc. etc., but when you get right down to it we're not all that different from them. Tech kids, though . . . yeah, there's a culture gap there. We Bulldogs live in a relatively small town about 60 miles into the east metro Atlanta hinterlands, yet we still do more partying on a Wednesday night than Techies do on a Saturday in the middle of Midtown freaking Atlanta. Our idea of a good night is a hard-liquor IV and dozens of the hottest coeds in the Western Hemisphere; theirs is World of Warcraft games played over the Internet with people who may not even be from this hemisphere. And so on and so forth. The jocks and cheerleaders from your high school are the kind of kids who go to Georgia; the awkward Dungeons & Dragons players off in a dark corner of the lunchroom are Tech material. Maybe it's not fair, but that's the way life is sometimes. 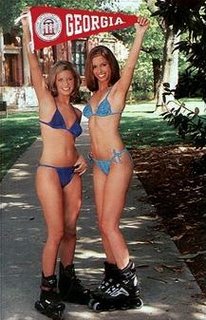 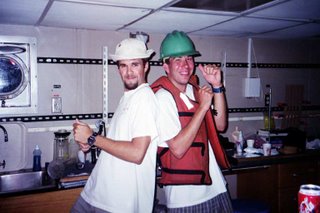 I really can't make it much clearer than this.

But anyway, it's a rivalry that's worth delving into further, which is why I approached Tech blog Ramblin' Racket about the possibility of doing a Q&A exchange so that the two sides could find out a little more about each other. You'll recall that I did something similar last year with Tech blogger Nathan Fowler, late of Golden Tornado and more recently of AOL Fanhouse. This year the stakes are ratcheted up even higher, as Tech is on their way to the ACC championship game while Georgia has struggled mightily for most of the season -- and Georgia is running a serious risk of sustaining its first loss to Tech of the Mark Richt era. First loss to Tech since the previous century!

What's on the mind of Tech Nation as they stand on the brink of maybe their best season since the national-title year of 1990? What, other than advanced calculus and a disturbingly thorough knowledge of obscure comic-book characters, makes the Tech man tick? You won't know unless you read, sucka.

1. About 11 months ago, Georgia Tech had just gotten embarrassed by Utah in the Emerald Bowl, and a substantial portion of the Tech fanbase -- even people who had supported Chan Gailey in the past -- decided they might not piss on Gailey if he were on fire. Now Tech is 9-2 and has a very real shot at their first-ever BCS bowl. What's the prevailing opinion of Gailey at this point? Have the Chan-haters softened their opinion on him, or do they think he's only taken advantage of a weak ACC?

The Ned Flanders of college football would have a glass of warm milk before going to bed, but that's almost like doing drugs.

Most realistic Tech fans (read: very few Tech fans) recognize that the ACC is down, and while GT benefits, we still believe that this is a truly solid team which took Notre Dame to the wire and has had only two "off" games (Clemson and UNC).

The hardcore-est members of the "Can Chan" movement would probably never let up even if we won the BCS title game, but most Chan-haters are converted. A lot of them are a total knee-jerk group who went directly from hating Chan to loving him. These are the folks who would deny that this is a down year for the ACC, and will probably complain that whoever we play in a bowl game is unworthy . . . I guess better that than hating on the coach, though.

2. One thing Georgia fans constantly revel in is just how much attention Georgia football is paid by seething Tech fans. So how much attention did Tech Nation pay to Georgia's struggles this year? Which, in retrospect, was more satisfying: Whacking Virginia Tech, or hearing that Georgia had lost to Vandy?

I'll be the first one to admit GT's "little brother syndrome." In defense of it, though, imagine if -- IN ATHENS -- there was 20x as much Tech stuff on homes/cars/businesses/etc as UGA stuff. There would be much the same effect. The reason the Dawgs are always on our minds is because they're always in our faces.

That said, we always know how the 'Dawgs are doing, and we definitely enjoy the failures. The weekend of the Vandy loss was a bye week for Tech, so there wasn't even a distraction from loving it. I don't think I've ever said "How 'bout them Dawgs?" more times than that weekend. Beating VPI was more satisfying, though. Schadenfreude only goes so far, and up until Tech's loss at Clemson, I was still worried about y'all screwing up our strength of schedule . . . although the rest of the ACC would have already hosed it.

3. How do you think this year's Yellow Jacket squad stacks up to the better teams of the George O'Leary era? 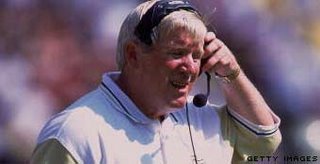 O'Leary: Never been seen in the same room with Newt Gingrich.

My instinct was to say the GOL teams were better, but as I think it through and look at the numbers, I think this year's squad trumps them. Joe Hamilton offenses put up more points on average, but they lacked the stifling D of the Jon Tenuta era. In GT's 10-2/ACC co-champ season of 1998, the team allowed almost 25 points per game (compared with [about] 15 so far this year).

The down year for the ACC doesn't effect my opinion here; in the late '90s, the ACC was still trying to shed its perennial-cakewalk/"FSU and the Seven Dwarves" image, so the quality of opponents was probably not all that different.

4. How will Reggie Ball be remembered after he leaves Tech? Will that change substantially if he wins (or loses) an ACC title?

Honestly, I think Reggie's legacy falls to this game against Georgia. Even if we win the ACC, with a loss to UGA that would always be the proverbial asterisk in the conversation. 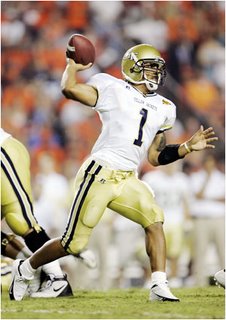 I know what you're thinking. "Was that third down or only second?" Well, to tell you the truth, in all this excitement I kind of lost track myself.

UGA coeds: Brumby, "Nine Floors of Whores." (I actually cheated on this one, because the first several responses I thought of were inappropriate . . . but all true.)

[Judges? Yes, we will accept "Nine Floors of Whores." We would've also accepted "Virgin Vault." A good friend of mine peed off of the roof of it while he was in school there.]

6. From what I gather, Tech has had some pretty impressive successes on the recruiting trail this year; however, after this season they lose a considerable amount of experience at quarterback, and could also lose a once-in-a-generation playmaker if Calvin Johnson busts tracks for the NFL. Particularly with regard to the UGA-GT rivalry, is the general sense among Tech fans that this was their "breakthrough year" setting them up for a return to national prominence, or that 2006 was just a one-year window for success that will start closing again once Ball and Johnson are gone?

Really a little bit of both. We expect a little fall-off next year (especially if Calvin leaves), but also a return to perennial contention for the conference title, much like Georgia since '02.

Tech has not gotten this year's level of media exposure since Joe Hamilton was on the Flats. (It really helps that some Calvin Johnson highlight is in 80% of ESPN's college football commercials.) Getting the team into the national consciousness helps recruiting, and that has obviously paid off with the incoming class you mentioned. If Tech can squeeze potential out of 4-star recruits the same way we have 2- and 3-stars, the program should be in great shape. (For an example of Tech getting the most out of its players, realize that P.J. Daniels started out a 7th-string walk-on, then led the ACC in rushing in 2004.)

7. Last question: A mysterious man shows up at your doorstep one day and offers you your choice of three wishes -- but you can pick only one: You can trade coaches with Georgia, trade female student populations with Georgia, or trade Travis Bell for a framed, limited-edition "Lord of the Rings" poster signed by every member of the cast. Which one do you choose?

That's damn tough. Even though I covet him, I've learned to hate Mark Richt, so no coach trade. And even though I covet the hotties, I wouldn't want to trade the womenfolk. One of Tech's greatest traditions is bitching about how much harder it was when you were there, and how kids now have it too easy (e.g. "Java!? I programmed on a PUNCHCARD, kid!" "We never had any fancy waterslide. And we only had a swimming pool for drownproofing." "Back in my day, east campus smelled like shit. And there were NO girls.") If the students ever had a female population like Georgia, I would be really angry and bitter about how much better they have it.

So, unfortunately, I would take the "Lord of the Rings" poster. I would sell it, if that makes it any less shameful a choice, but I would probably sell it at DragonCon, so the shame just rolls right back in. 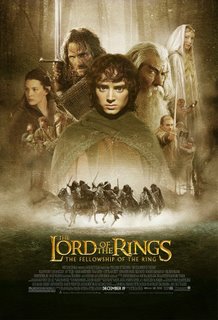 Thanks to Ramblin' Racket for having enough faith in the literacy of Georgia alums to participate in this little back-and-forth. Good luck Saturday (though not so much in the "hope you play a great game" sense as in the "hope none of your guys get seriously injured" sense). I'm looking forward to a great game and, dare I hope, 365 more days of holding it over you guys' heads.
Posted by Astronaut Mike Dexter at 7:07 PM

Come on now. We all know those Georgia gals' second husbands are most likely nerdy Tech alums with million-dollar patents.

Sarah is right, except you Georgia girls will be our ex wives, after your cackling about how you want a new 760iL and that house on Tuxedo Dr...your hotness will not be able to carry you that far, and we will leave you for some Tech girl we met taking chemistry.

Liar, there were no girls in Chemistry.

I did what all good GT students do, I married a girl from a big state university known for hot chicks (in my case, Kansas).

Nathan, there are plenty of girls in chemistry. They just don't speak english and moonlight as North Vietnamese regulars.

There are always lots of girls in 1st semester chem... until midterm when they drop the class and switch to INTA.

I definitely did not once drunkenly piss from the 9th floor of Creswell Hall, but I did do a book and an interview called "Kanu: 9th floor drunken Creswell Piss: If I Did It", where I talked about how I would have done it if I had in fact done it.