Some friendly advice for my Crimson mates.

Now, I'll preface this right off the bat by saying that I may not exactly be the best advice-giver on coaching personnel matters. I was one of the few Georgia fans who was actually upset when we fired Jim Donnan almost exactly six years ago (though I quickly recognized it was the right move in hindsight once we picked up Mark Richt), and also met with speculations of insanity after suggesting that Georgia hire Rick Neuheisel as offensive coordinator. So, like, take everything I'm about to say with a grain of salt.

But if somebody from the University of Alabama athletic department isn't on their way to Louisville, Kentucky, right this very instant carrying a suitcase full of $100 bills they plan on dumping on Bobby Petrino's desk, everybody in Tuscaloosa is a fucking retard.

First, a tear for Mike Shula, who's a good upstanding Catholic boy and maybe even a good coach in certain circumstances but rarely looked like he was prepared for the buzzsaw that is coaching at the Capstone. As someone who's demonstrated himself to be quite conservative in the matter of firing coaches, and who almost always errs on the side of giving so-and-so another year before dropping the hammer, I thought Shula might actually do pretty well next year with a team that was pretty young at a lot of important positions in '06. That said, I won't spend a lot of time arguing with anyone who'd made their minds up that Shula just wasn't the guy. Shula spent his first two years in Tuscaloosa looking like the picture you'd expect to see on the Wikipedia page for "deer in the headlights," looked like he'd snapped out of it during last year's 10-2 campaign, then appeared to regress right back into the old deer pose this past season. Shula may deep down be a great coach, but at the same time it wouldn't surprise me at all if we never heard from him again, at least on the sideline of a major college football team. 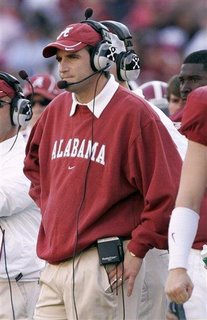 But anyway. Alabama, you need to hire Bobby Petrino. Stop chasing after Steve Spurrier, whose last two seasons at South Carolina haven't been that much better than the one that just got Mike Shula fired; stop chasing after Nick Saban, whose ego is getting fed by the NFL these days and hasn't demonstrated any desire to step back into the college ranks; stop chasing after Rich Rodriguez, who's coaching at his alma mater for Christ's sake (and doing a damn fine job of it to, last week's loss to South Florida notwithstanding). There are three major things going for Petrino, and they are, in no particular order:

1. He would bring the kind of wide-open offense Alabama hasn't seen in . . . well, maybe ever. Even when Mike DuBose and then Dennis Franchione were putting together 10-win seasons with the Tide, they weren't exactly slinging the ball all over the field. Part of the reason Shula got fired is because his offenses were mind-numbingly conservative. You want to open it up a little? Pass for 300 yards in a game for once? Petrino's your man. Spurrier's Spurrier, but he's not the Spurrier of the mid-'90s anymore. Petrino's the closest thing to that you're gonna find right now.

2. He's made it quite clear he wants to be coaching in the SEC. Guys like Saban, Rodriguez, and Rutgers's Greg Schiano are in cushy situations they know they'd be stupid to leave. But anyone with half a brain should know by now that Petrino, for all the success he's enjoyed in Louisville, sees it as only a pit stop on the way to someplace bigger. He interviewed for the LSU job; he promoted himself for the Ole Miss job before thinking better of it. And we all know what happened with Auburn. Which brings me to the third (and maybe the biggest) reason:

3. For the first time in six years, it would make Alabama look smarter than Auburn. Look, let's not sugarcoat this: Auburn has been eating Bama's lunch for years now, and not just in the Iron Bowl; the Tigers have been stringing together 9-, 10-, and even 13-win seasons while Alabama craps their pants with delight if they so much as make it to a New Year's Day bowl. Auburn is enjoying consistency and unity on their coaching staff while Alabama has turned coach-firing into practically a biennial ritual. But if Alabama were to snag the coach that Auburn nearly humiliated themselves on a historic level trying to hire . . . that'd be like the Punk'd of the decade in the SEC. You'd have a guy who knows Tommy Tuberville's secrets and can get his goat. This hiring would make the Iron Bowl exciting again before Alabama even wins one -- and it'd make Bobby Lowder spontaneously combust with rage, which is all the reason somebody should need to do anything. 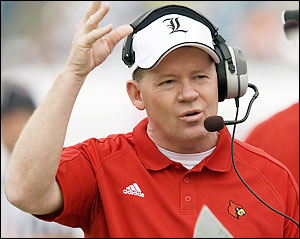 Knows where Tuberville's bodies are buried; also would apparently sell his own mother into white slavery to become an SEC coach.

Come on, Alabama. We know you've got money; give Petrino as much of it as he wants and bring him to T-Town. He's good, he's available, he's feasible, he'd drive your biggest arch-rival fucking nuts. I'm offering you this exclusive consulting work free of charge; just throw me some tickets to the Georgia-Alabama game at Bryant-Denny next year and we'll call it completely even. Now go!
Posted by Astronaut Mike Dexter at 8:39 AM

Unlike the Neuheisel suggestion, I think this suggestion is brilliant.
So brilliant in fact, that I would be shocked if Alabama, or more specifically Mal Moore, actually did it.

Dude,
Petrino worked at Auburn, just as you stated....he'll never have a job at UA.

Is South Carolina not South enough for you?

And, this is the best name out there. Grobe is Bill Curry, part deux. Rodriguez would need three or four years to get his personnel in to make his offense work. Spurrier is old, and leaving SoCar would be admitting defeat, which Ego-driven coaches do not want to do. At best, he would be a three or four year option, and then you're in this process all over again. You want somebody who is going to stick around for a while, and Petrino is the right choice.

Great suggestion Doug. I know you hate the Seminoles for some inexplicable reason but now that you have established your coaching selection chops how bout a pick for FSU's new offensive coordinator? And no, don't suggest Rick Neuheisel. Or Terry Bowden.

I actually don't have anything against the Seminoles -- I'd certainly rather have them be good than Florida. My main beef with the 'Noles over the past few months has simply been over the fact that Bobby Bowden was allowed to keep his son on as OC for so long in spite of Jeff's demonstrated unsuitability for the job. I lost a lot of respect for Bobby because of his apparent willingness to put his son ahead of his team like that, and for the school administration that they looked the other way for as long as they did.

But now Jeff's gone, and . . . man, I really do think Neuheisel would be a terrific fit, but if you don't want to go near him with a 10-foot pole then I'd go after USC's quarterbacks coach, Steve Sarkisian, with a vengeance. He's clearly an excellent developer of young talent, and he's also young enough that he could be groomed to eventually take over for Bobby if things worked out right with him as OC.

(And good lord, no, I wouldn't wish Terry on anybody. Well, anybody other than Georgia Tech or Tennessee.)

Doug you do know this football stuff. Good suggestion. I was an undergrad in Tallahassee when Saint Bobby was hired and was instrumental in bringing him to FSU. I will pass on your suggestion forewith. lol

I agree. Why bother with Spurrier. He's the Anti-Bear anyway.

Offensively, Petrino is the Steve Spurrier of 2006. While today's Spurrier is the Gene Stallings of 1991. I mean have any Bama fans actually watched a Spurrier coached game the past 2 years.