Blogpoll ballot #10, and another modest proposal.

So another Georgia-Florida game has come and gone, another gut-wrenching L has been etched into the Georgia column, and another vision quest for answers and meaning has begun. With all due respect to the actual experts who get paid actual money to make the decision on these kinds of things, I have an idea I'd like to share with the rest of the class -- not for how to win the Florida game, since that ship has sailed for this year, but how to maybe perk up the offense for the three critical regular-season games we have left.

There was enough ineptitude in various phases of the game Saturday that it would be a fool's enterprise to blame it all on one person, but some failures were more glaring than others. It almost seemed like things were looking up after the Tennessee game, but at this point it's kind of hard to deny: Our receivers, for the most part, couldn't catch the clap in a Moldovan whorehouse. In Jacksonville, the part of Schleprock was dutifully played by tight end Martrez Milner, who dropped four of the six passes thrown to him -- all of which, if memory serves, were potential first downs or big gains. I hate to throw a single player under the bus like this, particularly one with as much raw physical talent as Trez has, but he is a senior, and it may be time to bite the bullet and face up to the fact that if he was gonna be the superstar heir apparent to Leonard Pope, he'da been it by now. Guy's gotta be a complete basket case after the Cocktail Party; time to put him on the bench, use him as a blocker when necessary, and start getting Tripp Chandler some reps. 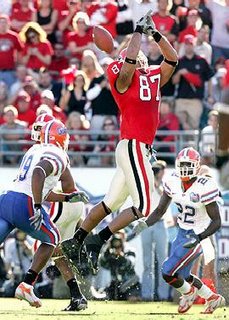 People say you look like MC Hammer on crack, Humpty.

Chandler's gonna need a partner in a two-TE set, but we already have the perfect complement on our roster. A player who has shown talent at a number of positions and who has only one fewer career reception against Florida than Milner does. A player who was on the receiving end of what was almost one of the greatest plays in Georgia-Florida history.

As the Columbus L-E's David Ching reported, almost the minute Richt announced Matt Stafford as the starter against Mississippi State, Joe T was asking around to see if there were any other position he could play, and apparently Richt even specifically said he would know what to do at TE, but that it wouldn't make any sense. I'm guessing that's because they thought Milner was actually going to be catching passes from there on out. But Tereshinski can catch passes, his own brother is a TE at Wake Forest . . . I'm not saying we put him in on every play, or even every 2-TE set, but the dude wants to contribute, why not give him a shot? Picture this: Fourth quarter against Georgia Tech, facing a third-and-long in Tech territory, TE Tereshinski takes the handoff in an end-around, then sits back and launches a TD bomb to . . . Matt Stafford? How poetic would that be? 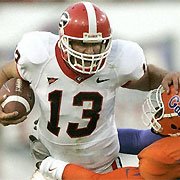 Anyway, just a thought. On with the Blogpoll.

Games watched: VaTech-Clemson, Auburn-Ole Miss, bits and pieces of Michigan-Northwestern, Florida-Georgia (of course), flipped back and forth between Texas-Texas Tech and Tennessee-South Carolina.

4. Arkansas (5)
Everybody in the SEC's great Biblical A-beat-B-who-beat-C-who-beat-D-etc. daisy chain moves up this week thanks to USC's long-awaited tumble, but quite honestly none of the teams in the SEC looked all that impressive this week. Florida's offense ground to a halt against a supposedly floundering Georgia defense; Auburn looked like they just didn't care against Ole Miss; Tennessee nearly got punked again by Spurrier and his Gamecocks. Even Arkansas didn't look nearly as impressive against ULM as the 44-10 final score would lead you to believe. Fortunately there are enough big games left in the conference that this should get shaken up a bit over the next few weeks.

10. Southern California (4)
I may be harping on Mark May's Trojan man-love entirely too much, but did you notice how Oregon State punked USC and May still found cause to spotlight the Beavers in his "Bonehead Play" segment on "SportsCenter"? I'm going to write a sequel to the Ed Orgeron Song and call it "Mark May is Crying," and the refrain will go "YawyawyawyawYAWWWWWyaw, YAWWWWW yaw, Trojans."

12. Oklahoma (17)
I've been impressed at the way they've continued scrapping despite the loss of Adrian Peterson. If they win out -- a distinct possibility, since Texas A&M (this Saturday) is the only currently ranked team left on their schedule -- they might still have an outside shot at a BCS bowl.

14. Boston College (19)
Everyone seems to have forgotten that these guys, in fact, are the frontrunners for the Atlantic Division title. Boston College-Georgia Tech -- if ever a conference championship game cried out to be televised on a Thursday night, it's this one.

18. Wisconsin (16)
I have to give them credit for finally escaping the Cheerleader Curse, but generally you want to try and avoid needing to mount a second-half comeback against Illinois, if you can help it.

20. Virginia Tech (25)
Some will say their win over Clemson was only a matter of managing to catch the Tigers at just the right time, but holding D-IA's top-scoring offense to single digits is a pretty major feat regardless.

25. Wake Forest (22)
Generally you want to try and avoid needing to mount a fourth-quarter comeback against North Carolina, if you can help it.

Show some love for Hawaii and it's No. 1-in-the-nation offense. None of the other pollsters have because they all go to sleep before Hawaii's games even start.

Nice call on the TE spot. Luckily MR has already thrown Milner to to dogs, no pun intended, and it would be magical to see Joe T III in there for a few plays. Doubt it will happen, but we can dream, right? I can hear the Munson call now ----

"We're knocking on the door! Tach is lined up in a 4-3 and they haven't stopped us all day. We move a man in motion, number 13, that's Joe Tereshinski, Stafford takes the snap.. hands off on an end around to the tight end, Joe T, he's looking for the corner and he has some blockers! Joe... and he pulls back he's going to pass and he's got a man down field! IT's Stafford! He's got five yards on his man!! LOOK AT HIM GO!! TOUCHDOWN!! TOUCHDOWN!! We just stepped on their face with and old athletic shoe and busted their lips!!!

When I saw the song title "Mark May is crying" I automatically heard "Jamie's Crying" from Van Halen's first album, because I'm in a classic rock mood today. I think there's a parody in there somewhere. A parody of a parody?

I wish Mark May would stop. SC doesn't really need any help in getting people to dislike them.

Hey Doug
Are you going to dress your dog up for Halloween? Could you post I picture if you do? I won't make fun of you. This time.
Signed
You Dog's Stalker

Doug, you should do the "soundtrack to your life" meme for the random thing on Friday. I'd bet it'd come up pretty well.

real good info on NFL....u must be crazy abt it...i prefer football as in soccer