· CBS Sportsline already has a countdown clock to the Michigan-Ohio State game. Wolverines Buckeyes number one number two BCS implications blahdy blahdy blah blah. What we really need is a clock counting down to the nationwide release of Borat: Cultural Learnings of America for Make Benefit Glorious Nation of Kazakhstan, the first four minutes of which are YouTubed above. Everything I've seen or heard of it thus far has been pants-wettingly funny. What can I say? Foreigners are hilarious.

· So Tennessee mascot Smokey IX bit (or, depending on whom you believe, most certainly did not bite) an Alabama player on the sideline at Neyland Stadium on Saturday. All due respect to Smokey, but . . . big f'in deal! One, it didn't happen during actual gameplay, and two, the receiver was falling on (or at the very least near) Smokey as it happened. Those circumstances in no way compare to what Georgia mascot UGA V did to Auburn wideout Robert Baker during the '96 UGA-AU game. That happened in the middle of the freakin' game, and Baker wasn't even getting all up in Uga's business. Uga just took a chunk out of him 'cause he fuckin' felt like it! Now, we can argue over the morality of that act if you like, but one thing that cannot be disputed is the fact that Uga is one hard-ass dog. 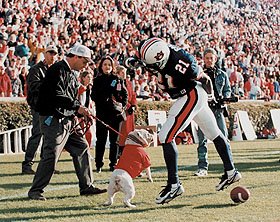 Maybe Uga smelled coke on him.

· Rush Limbaugh: total dipshit. Oh, wait, that isn't news. Anyway, as expected, Michelle Malkin rushes obediently to his defense and, also as expected, manages to completely miss the point. Limbaugh wasn't engaging in "tough scrutiny" of anyone's "positions or motives" when he posited, with absolutely no evidence or basic knowledge thereof, that Michael J. Fox was "faking" his Parkinson's tremors in a recent campaign ad for Missouri Senate candidate Claire McCaskill; he was merely pulling stuff out of his substantial ass in an effort to discredit his opponent without engaging in any substantive discussion of the issues whatsoever. Which has pretty much become Limbaugh's modus operandi ever since the national GOP started imploding a while back: If you can't argue with 'em on the issues, just make fun of 'em by impersonating them in a faggy voice.

· Speaking of complete wastes of space, I haven't ragged on Kevin Federline in a while, so howsabout I mock him for this quote, an Esquire magazine "Dubious Achievement" waiting to happen, referring to his appearance as an extra on "CSI":

"I shocked myself. There were parts that I wish I would have done different, but there are parts that really took me, like, Wow, did I do that? I looked at myself and I was like, It looked good. It looked perfect."

Pretty high praise for a role that basically amounted to "Guy In Background #1." But as hard as it is to believe, this one's even better:

With each birth, "it gets less and less stressful. It's just time to get my stuff down while they're young. so I can sit back and watch them grow up."

Yeah, I'd imagine it's gotten less stressful for him. Not being within a hundred miles of your previous two kids because you're busy fucking some new chick is a pretty good way of keeping the stress level down.

I can't even hear the name "Kevin Federline" anymore without having the same thought every time: "Phil Hartman's wife flies into a drug-induced rage and gives him a double-tap to the head . . . but Britney Spears continues to allow K-Fed to walk the earth?" 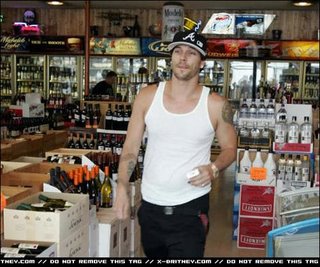 It's hard out there for a complete asshat.

· Cheerleader Curse Watch: The curse will be robustly tested this week, as the selection of Wisconsin's Ashley Pringle as SI.com Cheerleader of the Week means 17th-ranked Wisconsin will have to find a way to lose to 2-6 Illinois, a Ron Zook-coached team that managed to cough up a 25-7 lead over Indiana earlier in the season, at home this weekend to perpetuate the CotW's bad mojo. I suppose the Badgers could get caught looking ahead to Penn State, or star running back P.J. Hill could get caught in a bear trap Friday night and have to gnaw off his own leg to get out of it, but . . . let's just say that if Wisky does lose to the Illini, it will be categorically undeniable that we have a full-blown team-killer on our hands. 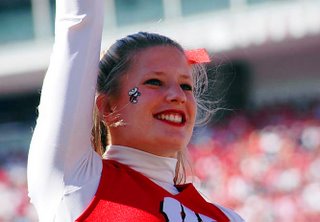 An even bigger team-killer than having Ron Zook as your coach? Strong words, but . . . yes.
Posted by Astronaut Mike Dexter at 8:21 PM

The good news is that Smokey is resting comfortably and is expected to make a full recovery. He really needs to watch what he eats.

I stole your idea. Hope you don't mind.