In the wake of Georgia's disastrous loss to Vanderbilt (for Homecoming -- did I mention it was Homecoming?), opinions are coming in from all sides as to what exactly is wrong with the team. The distressingly Tennessee-in-2005-like QB rotation is one popular target of fan disgust, and to Mark Richt's credit, it appears that that may have finally ended with the by all accounts definitive naming of Matt Stafford as the starter this weekend against Mississippi State. Others have decried Willie Martinez's flaky zone schemes on defense and made suggestions ranging from a change in scheme all the way up to firing Martinez entirely. Still others have tossed out some rather innovative ideas about player shuffling and substitutions on one side of the ball or another.

But it's something Jmac wrote at The Cover Two in the wake of the Vandy loss that really got me to thinking. Jmac mentioned the apparent lack of passion or motivation from the players during the Vanderbilt fiasco -- something I myself noticed from all the way up in section 607 -- and suggested that it speaks to a lack of motivating forces on the coaching staff.

Jmac is right: One of the things always touted as one of Mark Richt's greatest assets is his ice-veined calm on the sidelines, his utter refusal, maybe even inability, to betray any kind of panic to the players he's leading into battle. That is indeed a terrific thing to have in a head coach; for contrast, look at Mike Shula during his first two years of coaching at Alabama and tell me he didn't look like he expected to be punched in the face by somebody at any given moment. Richt's All-World poker face, I'm convinced, is a big part of the reason we've lost only two true road games during his tenure. But there's a flip side to that coin, and it is that while Richt's steely calm is not a panic-inducer, it's not a huge motivator either. For the first four years of his career at Georgia, that didn't matter, because he had defensive coordinator Brian VanGorder to be the yelling, fist-pumping ball of fire on the sidelines. I don't know if anyone's been head-butted at Georgia since Erk Russell left, but if they have, VanGorder was the one to do it. Exactly as Jmac states, BVG was the highly effective yin to Richt's yang, balancing out CMR's preternatural cool and creating a near-perfect chemistry on that staff that worked well enough to go 42-10 in their four years together in Athens. 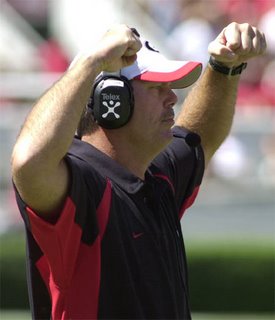 I think a lot of what we're seeing from the Bulldogs now is the effect of VanGorder leaving and not being replaced by someone who is truly his attitudinal equal. Whatever else you can say about Willie Martinez, he's not a fire-breather like BVG, and where there was once a perfect balance of contrasting styles, now it's looking more and more like a CPA convention on the Georgia sideline. I'm no psychologist, but that's got to have some kind of deadening effect on the emotions of the players -- maybe not as much as Iowa's pink visitors' locker rooms, but something. That's an aspect I think the coaches need to do something about.

Let's assume for a minute that Richt isn't inclined to throw anyone under the bus for this season's failures (probably a safe assumption at this point) and that the Powers That Be in the athletic department aren't either (probably also safe, unless Georgia completely implodes down the stretch and stays home for bowl season). So Martinez isn't going anywhere. What about the other side of the ball? Nominally the Dawgs already have an offensive coordinator in Neil Callaway, but any Bulldog worth his salts knows Callaway's primary duty is as the OL coach, since Richt is quite well-known for calling his own plays on offense.

There have been numerous calls for Richt to bite the bullet and hire a dedicated OC (though quite conspicuously not from Jmac, who inspired this idea in the first place). I would have no problem with that, and in fact I have a suggestion as to whom he might hire. Bulldog Nation might not want to hear it, but I'm gonna say it.

Say this out loud and see how it sounds: Georgia offensive coordinator Rick Neuheisel. 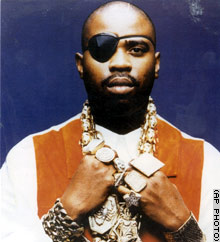 No, the other Slick Rick.

Think about it: His Washington teams scored an average of 30 points a game when he coached there from 1999 to 2002, and developed a gunslinging style that culminated in Cody Pickett passing for 4,458 yards as the starter in 2002. In the beginning he might need to be reminded that we do, in fact, have running backs on the team, but hey, he'll get used to that in time.

Perhaps more importantly than mere Xs and Os, though, is Neuheisel's personality, which would be the charismatic, high-energy polar opposite to Richt's Zen tranquility. I've seen Neuheisel's persona compared to that of Bill Clinton's, and unlike most people, I choose not to see that as a liability. He's passionate, energetic, frequently cocky as hell -- in some of his more fired-up moments on the Husky sideline, I remember him looking almost Spurrieresque in that regard. He also has a well-established history of being a fun-lover and a good-timer, but while he has a reputation for connecting very well with his young players, it's not the point of massive discipline breakdowns (like what's happening at Miami right now) or excusing embarrassing slackness on the field (like what happened at Florida under Ron Zook).

And the whole thing with the so-called gambling scandal at Washington . . . well, if every company fired every employee who'd ever took part in an NCAA Tournament pool at work, the office buildings of this country would look like the opening scenes in "28 Days Later." At any rate, Neuheisel claims his UW superiors told him it was OK, which seems to be borne out by the university's willingness to settle with him for $4.7 million rather than seek a verdict in his wrongful-termination suit. 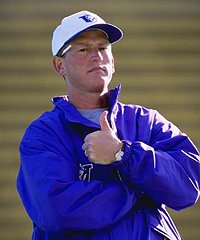 Sometimes I can't even look at myself in the mirror 'cause I'm scared of how fly I am.

I pitched this idea to a co-worker of mine and he wondered aloud where the hell Neuheisel had ended up after leaving Seattle. Turns out he's the QBs coach for the Baltimore Ravens. While the NFL does bring with it a considerable amount of prestige, being the QBs coach for the Ravens is kind of like being, say, wide receivers coach for the Steelers: Given what they do, you may only be the sixth or seventh most important person on the sideline. He's getting paid, what, $250,000 a year these days? Pfft. I say we call Rick up and offer him three quarters of a mil to come down to Athens. It's more money, more responsibility, and plenty of clubs for him to play his guitar in during the off-season.

It's a calculated risk, sure, but so's every play you call on offense. What have we got to lose? 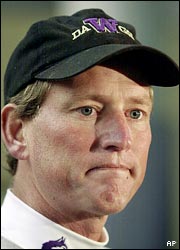 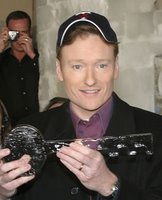 And if it doesn't work out, we can always give him a late-night show.
Posted by Astronaut Mike Dexter at 8:30 PM

Thanks for the linkage there Doug. That's what bugged the most about the Vanderbilt game - and the Tennessee game to some degree - that no one really seemed that fired up. I think VanGorder had a lot to do with that emotion.

Forget the halftime adjustments that were genius, but think of how absolutely badass VanGorder was on the sideline. He had focused rage and energy, and that was evident in the defenses he put on the field. It wasn't like we blitzed a heckuva lot - in fact the schemes Georgia employs now are almost exactly alike the ones under VanGorder - but he turned those players into ones who shared his passion and energy.

BTW ... I had no idea you were at TC this past weekend. DAve told me you were coming, but I never got a chance to say hi. Though I do have accidential photo documentation of you passing out 'Cherrishinskis.'

Well, I'll be there again this weekend . . . assuming that anyone in Bulldog Nation has the emotional strength left to tailgate at this point.

My brother wrote about this very idea a year ago... As they say, great minds think alike.

If it's not clear, I'm not accusing you of stealing the idea. I think it's actually a pretty good idea, and reasonable that multiple people can come up with it.

Heh, that's awesome. And I can't tell you how relieved I am that someone else came up with this idea too, so at the very least there's someone else out there who's just as crazy as I am.