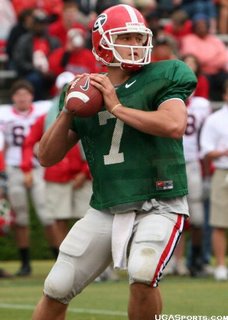 Off to Athens this weekend to watch a Battle of the Bulldogs -- Georgia fights for their right to party against the Croomtastic Bizarro Bulldogs of Mississippi State. If we win, free shots for everybody. If we lose, GATA will cease to stand for "Get After That Ass" and will instead mean "Get Away from That Arsenic." Say a little prayer for me.

My prediction? A big Bulldog win! Zzzzing! Seriously, I'm predicting a 20-10 Georgia victory. But, uh, if Richt decides he wants to score a ton more points than that, that's cool too. If you're into that kind of thing.

[Editor's note: One of the greatest pop songs of the '80s. Maybe ever. Just saying.]

Your own Ten, as always, in the comments.
Posted by Astronaut Mike Dexter at 9:00 AM

I too expect UGA to win and hope it is a good warm up for their season saving come back against Florida. The best omen of course is that they are not in anyway on the cover of SI this week.