OK, I'm sorry if this seems teh ghey, but today's my dog Jenna's second birthday, so I took some extra effort to make it a special occasion. And also to make it as goofy as possible. 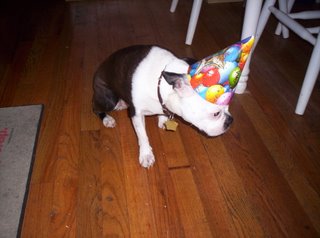 Starting with a hat. 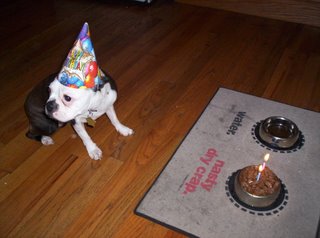 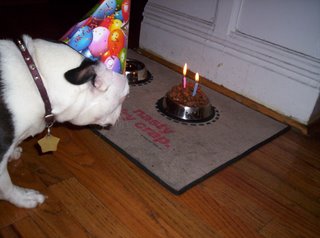 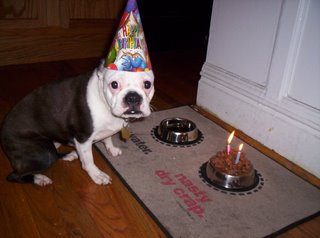 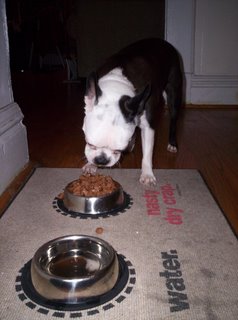 At long last, her forced parental humiliation over, Jenna gets to chow down.

And now the Meat:

· I haven't posted much on politics lately, what with far more important events taking place on the gridiron on a weekly basis, but I was checking up on the status of Democrats in the national Senate races today and came across this fascinating account of a Connecticut contest that has turned into surrealist theatre.

It's not that [Ned] Lamont has overperformed, or that Joe [Lieberman] has melted down, it's that Connecticut Election 2006 has gone off the deep end. It's not your normal white picket fence suburban election, with attack ad facing attack ad. No, this is more like a white picket fence election that suddenly gets bored with life and decides to live in the forest, take a bunch of LSD, trout-fish naked, and taunt a bear cub before ending its life suddenly and with total and inexplicable resolution on November 7. Well not really, but there's no analogy that I can think of summarizing what's going on. What has happened is that Joe Lieberman competed in a Democratic primary, lost, and is now competing in a Republican primary, and is losing again. . . .

On Monday, Lieberman was shocked that his feisty Republican opponent criticized him for voting with the Democrats 90% of the time. To understand this debate, you have to understand that Joe is a very self-centered man, and honestly believes that this election should be renamed 'Joe Lieberman Tribute Season'. He thinks that voters think about things like Committee seniority and how awesome his parking place is outside of the Dirksen Senate office building (to be fair to Joe, it is a really good parking spot).
This means that he also buys into the ridiculous idea that Democrats are mean, and Republicans are nice. Thus, a Republican attacking him from the right was not only shocking, it was problematic, since his strategy hinges on getting votes from conservatives and moderates to hold off dirty fucking hippies like businessman Ned Lamont and his venture capitalist wife, Annie.

Interesting. So the Republican challenger was giving Lieberman more heat than Lamont? And none of Joltin' Joe's supposed pals in the GOP came rushing to his defense like they'd been doing for months? Here's what I said about Lieberman's prospects back in July:

I think Atrios is right in predicting that Joe's "true loyal base -- Republicans" will not rush to his aid nearly as quickly as the Lieberman campaign almost assuredly believes they will. The current GOP is nothing if not opportunistic to a cutthroat degree, and given the choice between keeping a loyal (if big-I Independent) lapdog and picking up a Senate seat for the Rs -- particularly in a year when the Rs are in real danger of losing their Senate majority -- the Republican Party will aim for the latter and leave Lieberman twisting in the wind. 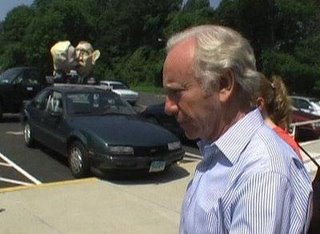 Might be time to start updating that Monster.com listing, bubeleh.

Yup, I win, who wants to touch me. Anyway, I don't think the Dems will retake the Senate this year, but I think they'll unseat incumbents in Pennsylvania, Ohio, Missouri, and Montana and hold serve elsewhere to close within a 48-51 margin (49-51 if you count lefty independent Bernie Sanders, who's virtually assured of a win up in Vermont). And in the House, I think they'll pick up somewhere in the neighborhood of 25 seats and retake the majority. Nineteen more days and we'll see if I'm right.

· Kyle King wasn't exactly crazy about my idea to hire Rick Neuheisel as Georgia's new offensive coordinator. Look, I don't have my heart set on seeing Slick Rick in the red and black; I'm just tryin' to shake things up, baby. But I do have to take issue with a couple of the points Kyle makes. First, much of the recruiting shenanigans Kyle decries are pretty picayune at best. Second, Neuheisel didn't leave Washington's program in a shambles, U-Dub athletic director Barbara Hedges left the program in a shambles, first by firing Neuheisel in the middle of summer practice over gambling rules her own assistant AD was clueless on, then by replacing him with Keith Gilbertson, who had one whole winning season in his previous head-coaching gig at California (and who himself confessed to participating in office gambling pools while at UW). I certainly won't defend Neuheisel as some kind of saint, but I do think his reputation is a little worse than he probably deserves. He's no Jim Harrick, that much is certain. 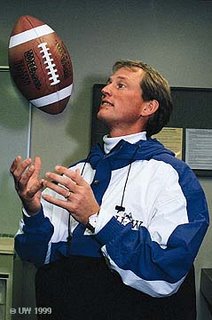 Got rid of all his platinum cards and got him a uranium card.

· Over at the inaccurately named Dodgy at Best, Kanu blasts one out of the park with his hilarious in-character account of a typical day for CFB handicapper par excellence Phil Steele. And I think we have a new wildly popular sexual innuendo in the making with "backdoor cover." If I had a cap on right now I would doff it to you, sir.

· This blog may seem inconsequential to everybody but me -- and even me on occasion -- but obviously somebody at Esquire is reading it, because in the November issue's "The Obscure Women We Love" feature, they profiled two women who have been specifically mentioned on Hey Jenny Slater as Official Future Ex-Wives: Melissa "Frenchy" Theuriau and Jill "Mercury Girl" Wagner. Uh, I'm sure they appreciate the pub, guys, but where you been? You don't have to give me credit, or even admit that you love the hell out of this blog -- just give me the monthly column you're dying to publish and we're square. Preesh. 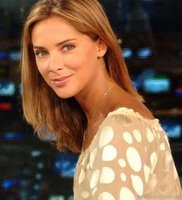 Obscure? I beg to differ, sirs.

· Speaking of hot girls, it's time for the weekly Cheerleader Curse Watch. As I've pointed out, schools represented by SI.com's Cheerleader of the Week are now 0-3 in the games immediately following their CotW feature, but it's actually even worse than that: Alabama, Georgia, and UCLA were a combined 12-1 before getting tapped for Cheerleader of the Week recognition -- post-CotW, they've combined for 2-5. Next in front of the firing squad: Arizona, represented by senior marketing major Taylor Hendrickson as this week's featured cheerleader and hosting 3-3 Oregon State on Saturday. Just so you're aware, the Wildcats have failed to score more than 10 points in consecutive games this year, and last week they posted 20 against Stanford, so . . . good luck, kids. Don't say daddy didn't warn you. 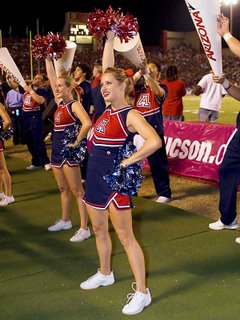 Pity. She seems like such a nice girl.
Posted by Astronaut Mike Dexter at 9:14 PM

Email ThisBlogThis!Share to TwitterShare to FacebookShare to Pinterest
Labels: blogs that are better than mine, hot chicks, Jenna the wonder terrier, Mystery Meat, politics

Under control with Gary Barnett? Wow, doesn't that seem like a laugher now.

One thing that you are failing to take into consideration in your analysis of that CT race:

Once that shit gets rolling... Oh. Um, nevermind.

Also, WTF re: those two giant paper mache headed dolls making out in the back of that picup truck in the Joe photo? Is the one on the left supposed to be Lieberman and the one on the right with the giant ears supposed to be, Jacques Chirac? Tommy Tuberville? Bizarre...

Your dog is kickass.

Last time I saw a Conn Sen poll, Lieberman was up aobut 10 points. Not saying it's a good thing, just the way it is.

Love your dog's look of patience. Where did you get that food mat? It's cute.

The mat was a Christmas present from the 'rents. Jenna really cleans up on Christmas.

It's funny how many humanoid mannerisms Jenna has picked up in her two years. When I stuck the birthday hat on her and told her to hold still while I took the picture, she really did have the look of a humiliated 12-year-old girl who wishes her parents would just take the f$#!ing picture already and stop embarrassing her in front of her friends, which you can kind of see in the next-to-last picture.

That dog is going to poop in your shoes while you're at work.
I lifted the picture and put it on my myspace page. I don't have to pay royalties.

I wasn't thinking so much 12 year old girl look as a dog that knows that she has a flammable hat and food with a source of ignition of said hat. A painful conundrum for any of us.

That next-to-last picture of Jenna? You should totally submit it to cuteoverload.com.