The Vandy loss still hurts -- as the great Frank Drebin said, not as much as jumping on a bicycle with the seat missing, but it still hurts -- but I'm slowly getting over it. I think I'm just about through the five Kubler-Ross stages of dealing with a tragedy, and by the way, Kyle, they're not rage, acceptance, blah blah blah, they are Anger, Even Bigger Anger, Depression, Inebriation, and then Acceptance.

How do I show Acceptance? By doing a whole ounce of coke and then chatting with my furniture for hours as if they were sentient beings capable of talking back to me? Naw, man, I don't do that stuff anymore. Instead I merely have a cogent discussion of some football-related issues as posed by Sooner blog My Opinion On Sports, who put their midseason Blogpoll roundtable questions up this week. Ahh, refreshing.

1. Which coaches are clearly on the hot seat at this point? Who is surprisingly not?

Larry Coker was 75-percent gone before the disgraceful brawl between his band of budding statesmen and the guys from Florida International; the brawl probably took care of the other 25 percent. Michigan State's John L. Smith and North Carolina's John Bunting, either (or both) of whom could conceivably go oh-fer the rest of the season, are also dead men walking. I think Dirk Koetter, who still has a chance to win the rest of his Pac-10 schedule at Arizona State and finish 9-3, gets one more year, as does Mississippi State's Sylvester Croom, who'll likely be asked to do the traditional assistant-coach housecleaning after this season is over with. 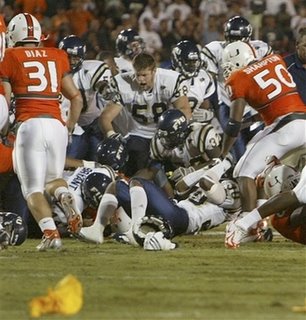 Somewhere Ron Artest is like, "What's the big deal?"

As for people with a surprising amount of job security in '06, Texas A&M's Dennis "I See London, I See" Franchione certainly qualifies, though his 6-1 start in '06 is built primarily on the backs of an embarrassingly easy schedule. The dude I really have to give a shout-out to is my old Kentucky homeboy Rich Brooks. I gave him nothing but red hell for three-plus years (even comparing him to Ralphie Wiggums) as he led the Mildcats to a 9-25 record from '03 to '05, but right now the 'Cats are 3-4 and could very well finish with enough wins to go to a bowl this year. They could also very well whack Georgia in a few weeks, and yes, I threw up in my mouth a little bit just typing that.

2. Pick three of the undefeated teams and state your case as to why they won?t run the table.

I'd love to watch Rutgers go 12-0 and make it to the BCS, but it ain't gonna happen, not with Pitt, Louisville, and West Virginia still on the schedule. Speaking of Louisville, they've got also got Pitt and WVU left to contend with, not to mention Rutgers, and after reading about their lackadaisical win over Cincinnati last week -- with Brian Brohm back in the saddle, strangely enough -- my confidence in their ability to run the table is a little shaken. I still stand by my prediction that they'll knock off the Mountaineers at home on November 2, but there are multiple other opportunities for them to get taken down.

Then finally there's Southern California, who's getting mad crazy love from the computer polls (as well as a blowjob from Mark May that's been going on for, what, three years now?) despite three straight unimpressive wins. This clearly is not the Leinart/Bush offense they're working with down there, and that's going to come back to bite them in three weeks' time, when they commence a three-game gauntlet of Oregon, California, and Notre Dame. Yes, they get all three of those at home, but they played Washington and Arizona State at home, too, and didn't manage to turn that into an impressive showing. If I had to put money in which one of those opponents takes down the Trojans, I'll go with Cal, who has looked damn near unstoppable since getting tagged in Knoxville on September 2.

3. Which conference is playing the best football right now?

The SEC. Honestly I'm getting sick and tired of the whole "We're so good we can't put a team in the BCS title game" argument, especially when it comes from Olympic-champion whiner Tommy Tuberville, but the oft-discussed circular firing squad has certainly been in effect in the SEC this season. Whatever the case, I'll put the top four of Auburn, Arkansas, Tennessee, and Florida up against the top four of any other conference in the country, and I think the SEC has better depth in the 5 through 9 spots than anyone else, too. 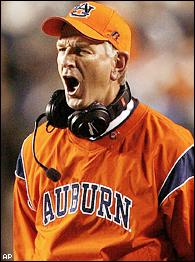 Be that as it may, Tommy, shut the fuck up.

4. Which team is playing above and beyond your expectations this season?

Tennessee is right up there, though honestly I couldn't have told you what my expectations for the Vols were going into this season, so I'll give my primary props to Arkansas. We all thought Phil Steele was nuts when he picked the Hogs to finish second in the SEC West this season, but it turns out Phil's only mistake was not being nuts enough -- Arkansas has yet to lose a conference game, and with a victory over presumptive SEC champion Auburn under their belts, they're entirely in control of their own destiny in the Western Division race, to the point where they could lose to either Tennessee or LSU and still represent the division in Atlanta on December 2. 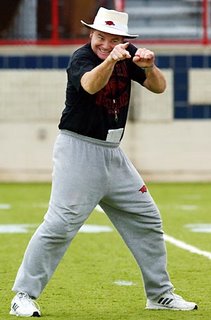 And as much as it kills me to say it, I've been quite surprised -- vomit-inducingly so, in fact -- by how good Georgia Tech has been in 2006. Being a Georgia grad, I have to temper this by backhanding them with a reminder that they may only look good compared to the Special Olympics level of competition amongst the rest of their conference, but still, games like last week's letdown opportunity against Maryland were games Chan Gailey and Reggie Ball would've found multiple ways to lose in prior seasons -- this year they're winning them. There's still plenty of opportunity down the stretch for them to have yet another Chantastic 7-5 season, but somehow I don't see it happening.

5. Which team is crashing and burning in regards to your expectations?

I had Virginia Tech at #14 in my preseason Blogpoll ballot and was touting them for a back-door BCS-title run as recently as week three, but since then they've apparently decided to have their usual November collapse a month early, and have coughed up what amounts to a three-game division lead to the Yellow Jackets. Oopsie! I also had LSU not only at #4 in the country but also snaking an SEC title from Auburn, and they've managed to whiff on both of those expectations so far.

And of course I would be remiss if I didn't fess up to some of my predictions about Georgia. "10-2 and a postseason bowl trip to either Dallas or Tampa" . . . "Joe Tereshinski III will retain a firm hold on the starter's job for the duration of the season" . . . uh, yeah, I'll shut up now. Next year I'm going the Lou Holtz modesty route and touting every single one of their opponents as the second coming of the '95 Cornhuskers. 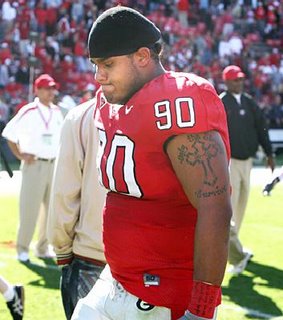 My title-bout prediction was a rematch of Ohio State-Texas; it'll take some upsets to teams like USC and West Virginia to make that happen, but that prediction is theoretically doable. Of course, I'd be perfectly happy with Rutgers-Arkansas, too.
Posted by Astronaut Mike Dexter at 8:29 AM

Email ThisBlogThis!Share to TwitterShare to FacebookShare to Pinterest
Labels: football, roundtable, teh suxxorz

Well Doug, I'm not sure why, but I caught 3 people reading your old Simpsons/SEC post in front of me in Property this morning. So apparently somebody found it and started passing it around Georgia Law again.