Friday Mystery Meat and Random Ten (with two you get eggroll).

· Pardon the lack of posting over the last couple days, I was in scenic Ozark, Alabama, for an appearance by everyone's favorite former four-star general and supreme allied commander of NATO, Wesley K. Clark. I'll have the full story on that, and hopefully some photos, at some point over the weekend. 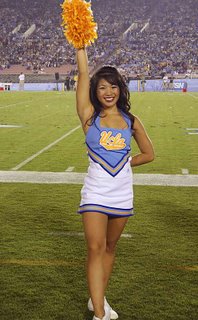 · Sports Illustrated jinx update: The oft-discussed "SI cover jinx" will be taking the week off, because . . . well, because the Tennessee Volunteers, subject of the magazine's most recent cover, are also taking the week off. You dodged a bullet, assholes! But there's a perfect opportunity to gauge the other jinx that Hey Jenny Slater blew the lid off of a few days ago -- the SI.com Cheerleader of the Week jinx. Above is Jennifer, a lovely political science major at UCLA; she looks kind of like this girl I used to date, but that girl went to Stanford and would probably scoff at any comparison to a freakin' Bruin, so we'll speak no more of that. What's really relevant here is that the schools represented by the last two Cheerleaders of the Week have gone on to lose their next two games, and in bizarre fashion: Alabama missed an ungodly number of kicks, including a PAT in overtime, to lose to Arkansas 24-23, while Georgia went up 24-7 on Tennessee only to collapse in the second half and lose 51-33. Let's just watch and see what happens when Jennifer, and the rest of the Bruins, go up to Eugene this weekend to play the Oregon Ducks. As Ian Fleming once said, "Once is happenstance, twice is coincidence, three times is enemy action," and if UCLA gets bonked this weekend then I think the Cheerleader of the Week jinx will have been conclusively proven.

· Actual football content: The results of the latest Blogpoll are up, and for the fourth week in a row, Hey Jenny Slater sits atop the Straight Bangin' Award rankings for pollster most pessimistic about his own team. I await the angry letter from Georgia Gov. Sonny Perdue with breathless anticipation.

· On notice this week: 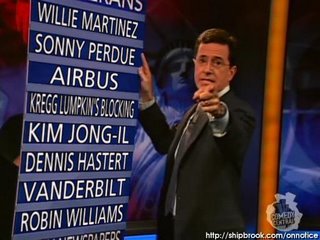 · Speaking of Dennis Hastert, doesn't he kind of look like what would happen if "The Thing" were a 10-term veteran of Congress?

Your Ten, jixes, "On Notice" lists, whatever else in the comments.
Posted by Astronaut Mike Dexter at 10:59 AM

Doug did you watch last night's woodshed whipping of the Hokies by BC? You're on notice until you start dissing VA Tech like you have been FSU.

It is true Tennessee does not play this weekend, but Georgia does and they are in the SI cover photo as well, so perhaps your cover theory will be tested after all. The story the photo illustrates is actually about the SEC in general, not specifically Tennessee/Georgia, so perhaps the curse is limited to photos of teams that are actually the focus of the cover story. If not, Georgia is doomed.