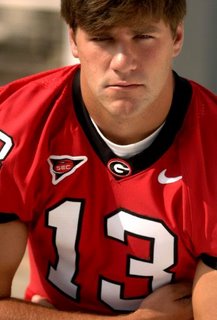 So I've been pretty hard on the Dawgs lately, and it begs the question whether I think they have any kind of chance against Tennessee this weekend. As a matter of fact, I do. Georgia's defense is good enough to keep them in the game all by themselves; but if we want to actually pull ahead at any point and, you know, win the game, the offense is gonna have to step up and do something. But there are ways we can manage this.

I agree with Paul Westerdawg -- and, by extension, Jeff Schultz -- that Joe Tereshinski's return is not, by itself, going to transform Georgia's offense into the 2004 USC Trojans. What it may do, however, is bring a level head and a steady hand to the offense, someone who can inspire the guys around him to step up and make the plays that need to be made. Maybe I'm just being naïve about this, since he can't make the receivers catch their freakin' passes or make the O-line run-block better up the middle. But what Georgia needs right now more than a guy who can launch the ball 60 yards downfield on any given play is a guy who's (relatively) experienced, who knows the offense, and can march the team downfield on consistent drives. Of the three QBs we've played this season, JoeT3 seems like the one best equipped to do that, and I have a feeling that's why he's getting the start.

But if Richt appreciates Tereshinski's consistency, then he needs to reward it by being consistent himself. No rotating QBs on a possession-by-possession basis, which I think is largely responsible for the offense not being able to get into any kind of rhythm in the first half against Ole Miss. If Joe T's good enough to be the starter, he's good enough to play the entire first half without having to worry that he'll be pulled the first time he lets one sail on him on a third-and-long. If I'm Mark Richt, then barring a four-INT Zabransky meltdown, Tereshinski gets to play the entire first half and the first possession of the second; if I'm still looking up at a goose egg on the scoreboard after that, then, and only then, do I look for someone else to throw into the mix. If you're optimistic that the offense will respond to him, then you've got to give him time to do that.

And what do I tell Tereshinski to do during that time? Play-action the shit out of 'em. Vols expert Darren said that the Tennessee defense is a little vulnerable in the middle with Justin Harrell being out for the season, so run Kregg Lumpkin at 'em any which way you can -- he's the kind of guy who's dangerous both when he's attacking right up the middle and when he's doing his cutback thing -- and then start dinking 'em to death with underneath routes, seven, eight yards at a time. That won't excite the complainers in the stands who think that Matt Stafford a) should be starting and b) should already have 2,000 yards on the season, but fuck 'em. Martrez Milner is finally catching passes again; if you think he can be the next Leonard Pope, use him that way. Lumpkin and Ware have been some pretty effective pass-catchers, too. If you see a favorable one-on-one down the field, roll the dice and toss one up. (Just no more delayed handoffs, draw plays, or fullback screens on third-and-anything-more-than-like-six-or-so, Jesus.)

Even if all this is done, it's still nowhere near a certain thing that Georgia wins. But the most important thing for the coaching staff to do is display some confidence in Joe T and give him the kind of plays that can win the game. Richt openly said after last year's Florida game, in which Tereshinski had to start in place of an injured D.J. Shockley and fell agonizingly, heartbreakingly short on the scoreboard, that he'd called too conservative a game and should've let Joe T open it up a little more. I can't quite explain why, but this weekend's game has a feeling eerily similar to that one, so if you've really learned your lesson, Comrade Richt, prove it. We've likely lost our starting placekicker for the season, so if ever there was a time to get over your affinity for playing for field goals instead of TDs, now would be it. Show JoeT3 you have confidence in him; let him make plays. Tennessee's defense is going to throw up enough obstacles in Joe's face; don't force him to contend with even more coming from his own sideline.

But I will offer an inspirational Not-So-Random Ten for Joe and for all of Bulldog Nation today: 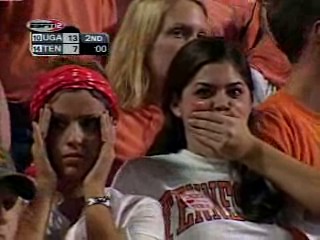 I'll be fondly reminscing about this between now and 6:45 p.m. Saturday.
Posted by Astronaut Mike Dexter at 7:57 AM

Like Lou Holtz said, with J.D. Stokley we don't have much of a chance.

That all seems measured, reasonable, and logical - are you sure that you're really that into college football blogging?

ummm, not so much.