The pivotal plays you didn't see.

In every football game, particularly games in which the outcome defies widely held expectations or established trends, there are plays and stats that don't show up in the box score but end up having a major effect on who wins and who loses; those are commonly referred to as "hidden plays." Certainly Saturday's Georgia-Tennessee game, in which Georgia's offense finally came to life but their top-ranked defense gave up 51 points, had plenty. Numerous bloggers have extensively analyzed the most obvious factors in Georgia's loss -- the turnovers in our own territory, the lack of a pass rush, the soft coverage on Tennessee's receivers -- but with all due respect, I wanted to go past such superficial analysis and dig deep into the game to find out where and when it was won and lost. And I found four "hidden plays" which, I think you'll agree, the game truly hinged upon. 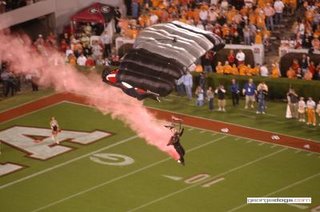 1. People parachuting into the stadium during the pregame show

I already mentioned this at the very beginning of my postgame recap, but I can't overstate the detrimental effect the parachutists had on our play Saturday night. Going into the Tennessee game, Georgia was 0-1 all-time -- not a single victory -- when people parachute into the stadium before the game. When they tried it last year, Georgia was clinging to a 30-28 lead over Auburn in the final minutes and appeared to have the Tigers on the ropes when Auburn QB Brandon Cox laced a 62-yard pass to Devin Aromashodu on fourth-and-10 that set up Auburn's winning field goal with six seconds remaining. Clearly, pregame parachutists are a play that Georgia just hasn't mastered yet, and next time they might be better served by a higher-percentage play like fireworks or Up With People. 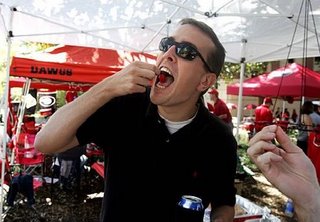 Paul Westerdawg thought this was such a huge factor in the loss that he devoted an entire post to it, and I can't say I blame him. The "Cherrishinski" -- a pre-game shooter-cum-appetizer consisting of maraschino cherries soaked in grain alcohol -- was first invented before the 2005 Georgia-Florida game, in which Joe Tereshinski III had to start in place of an injured D.J. Shockley; Georgia proceeded to lose a heartbreaker, 14-10. Again, this is what happens when tailgate coordinators abandon fundamentals like Wild Turkey and tequila shots and decide to get cute with trick plays; we just don't have the offense to be pulling stuff like this off at the moment. 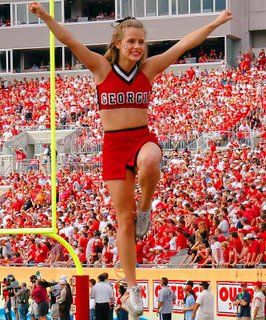 Georgia fans were stoked when UGA cheerleader Christine Conley was named "Cheerleader of the Week" and featured in her own photo gallery on SI.com. Had they checked the record books, though, they wouldn't have been so excited. SI's previous Cheerleader of the Week was Alabama cheerleader Jody Reeves, who was featured just days before the Tide suffered their first loss of the season, a heartbreaking OT loss to Arkansas. Conley, a talented junior on the squad, was certainly game for her first career start as a Cheerleader of the Week, but you just can't put the entire game on one person's back like that, no matter how stable they are at the top of a pyramid. Conley's supporting cast is going to have to step up and give her some help in upcoming games, or this kind of thing is going to happen again. 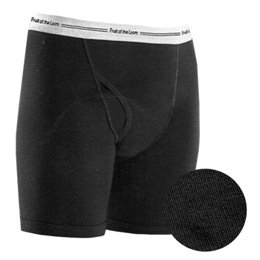 4. I didn't change my underwear during the game.

It hurts me to say it, but yep, this one's completely on me. A good fan gauges the ebb and flow of the game and makes the proper in-game adjustments needed to counter what the opponent is throwing at them, and in squeaker wins over Colorado and Ole Miss in recent weeks, I did just that. After Georgia's second straight possession in the third quarter against Colorado ended with a fumble, I threw a toaster oven off my balcony, then went into my room and changed my underwear; I think it was because I was wearing red-and-black boxer briefs at the time and I felt this might have had some effect on the game. Call it a desperate move, but it worked -- Georgia came back from a 13-0 deficit to win 14-13. Following week against Ole Miss, same deal: Georgia went into halftime down 3-0 to what might be the worst team in the SEC, so I changed my underwear again. The adjustment worked, as Georgia finally found some momentum under QB Matt Stafford and won the game 14-9. In two games, the Bulldogs amassed only 152 yards pre-underwear-change and gave up 346; post-underwear-change, they rolled up 294 yards and held their opponents to 214. Clearly, then, an adjustment that paid off.

When Tennessee blocked Georgia's first punt of the fourth quarter on Saturday, turning what was once a 24-7 deficit into a 38-27 lead over the Dawgs, I thought it might be time to run home and change the ol' drawers again. But then Thomas Brown took the ensuing kickoff 99 yards for a touchdown, and I thought maybe the ship was righting itself without my help. I couldn't have been more wrong, and my complacency cost the team in the end. Tennessee tacked on three more touchdowns in the fourth, and the rout, just like my same pair of underpants, was on.

These are the kinds of things that myself and other Georgia fans are going to have to keep an eye on as the season wears on and Georgia gets into the heart of its SEC schedule. If we don't make adjustments and continue making these same kinds of mistakes, it's going to be a very pedestrian season. But if we bother to take a look at the "hidden plays" and see where we can make just a tweak here or a tweak there, we'll be a stronger and more consistent team because of it.
Posted by Astronaut Mike Dexter at 1:16 PM

I have to take some responsibility as well. The burgers were fantastic, but I really should have been making quesadillas. We've never lost on a day where I ate quesadillas before the game.

Exception? 2005 Georgia-Florida, when in honor of our Polish powerhouse, I switched out the chicken for kielbasa and the salsa for coleslaw. Polskadillas? Tasty treat, bad juju, and that loss is entirely on me. Well, me and the Cherrishinski-eaters, apparently.

But you want to know about sick, here's sick. Again, a friend got married Tenn weekend, as has happened 4 out of the last 5 years. The only year it did not happen was 2004, when we lost at home--a game I attended. My usual ritual is not to watch any of the game or get updates or read the paper, so I watch it DVR'd, minus the commericals and anonoying commentary. I'm thinking the fact that I'm not watching the game is influencing the outcome in GA's favor.

So I'm watching it on tv when I get home from NC (with my lucky GA hat), and things are starting to unravel, and the cat jumps on the couch. Immediately it's 4th down and we punt out of our own end zone--blocked for a TD. So I throw the cat off the couch, telling her she's bad luck. Immediately thereafter, we return the kickoff 99 yards for a TD. Then the cat jumps back on the couch, and Tenn returns the ensuing kickoff something like 45 yards. I throw the cat out of the house, telling her she's terrible luck and she's wrecking the game.

I threw a poor 12 year-old cat with a big pooch belly out in the rain b/c I thought she might be affecting the outcome of a game that ended some 14 hours prior.

I know there's no logic to it, but I still can't help but think the cat's actions, combined with my eating a sandwich during halftime, somehow cost us that game.

In addition, so far this season when the Dawgs were trailing at the half or later, I shaved. Since I was at the game, this was pretty much impossible, but I figure that's part of it.
Worse, I was sitting behind the band, when in all previous trips I sat in the end zone. It ruined some powerful mojo. Previously the Dawgs had never lost when I was in the stands with a date--but the key was the location. I need the date, and the end zone seats.

Ol' Matty is taking it on the chin here. Might as well admit the Cherrishinski photo in question was taken at our tailgate, and I consumed many as well.

Hilarious...so now the SI jinx isn't just for the cover of the magazine but for their web-site as well.

"...and the rout, just like my same pair of underpants, was on."

I actually seem to recall that Cal actually did practice that play. Not specifically on kick returns, but I seem to recall they had some cross-pollination in spring ball from their rugby team, and a lot of the players were at least familiar with, using lateral passes to get up the field.