Friday Bostonblogging and Random Ten: Yea Though I Walk Through the Shadow of the Valley of Death edition. 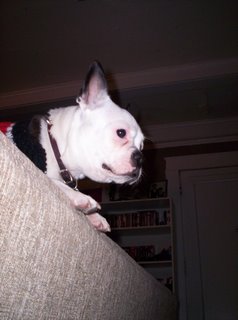 We must protect this couch.

I haven't mentioned it much because other bloggers are doing a far better job of covering it than I could, but this weekend is the annual hugenormous matchup between Georgia and Florida in sunny Jacksonville. Florida is favored by not one but two touchdowns, which should kind of give you an idea of how this one's looking to the rest of the country and, quite honestly, to most people in Bulldog Nation; my own prediction has the Gators actually winning by a wee bit more than that. Jeff Schultz, shockingly, is picking Georgia to cover. But people picking Georgia to actually pull the upset are about as scarce right now as "Re-Elect Mark Foley" yard signs.

Last year around this time, as Georgia went into battle with backup QB Joe Tereshinski having to lead the team due to D.J. Shockley's injury, I confessed to feeling a "weirdly electric atmosphere around the game" as if "something really amazing is gonna happen that one team's fans are going to be talking about for a long time." I'll refrain from making any such statements this year, because I honestly don't feel anything like that this year; I'll simply say I think Matt Stafford will play better than people expect, and Georgia will be in it for at least the first half, and leave it at that. But nevertheless, I will be doing all my usual superstition observance the next couple days and doing anything I can to help bump up Georgia's karmic mojo, including putting my dog in a sweater. 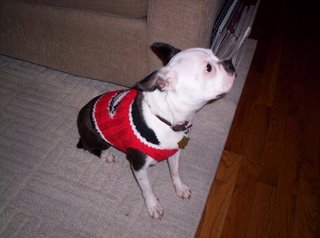 To paraphrase a popular Ole Miss slogan, "We may not win every game, but we never lose a battle of mascot cuddliness." So that's a moral victory right there.

Anyway, no more predictions or anything remotely resembling same, other than to speculate that a lot of people will get really stinking drunk this weekend. Of that you can be quite certain.

Random Tens? Weekend predictions? Proposals of marriage? Easy ways to get out of traffic tickets? Put 'em in the comments por favor.
Posted by Astronaut Mike Dexter at 8:07 AM

Cute, cute puppy! And your dog would never call you "assface". If you had a cat, that would be different. Cats call their humans all manner of bad names.

I hope the Dawgs can pull of a miracle tomorrow.

I pick Georgia to win, although only because it would put Tennessee in first place in the east, which would piss off the average Georgia fan more than losing to Florida.

How about them HOKIES!!

Richt is tailoring the offense to Stafford this week. Not saying the Dogs can win, but Florida will have to score 30 to prevail.

You know what would be even more humilating for your dog? If you put her in the UGA sweater and sat her in a bag of ice.

is that a French Bulldog?