A year older and clearly not even the tiniest bit wiser. 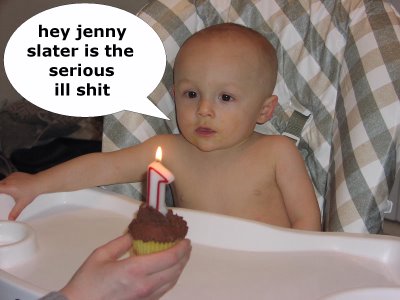 Yup, it's been a whole year since I started this thing from the smoldering ashes of previous blogs, and though we've shared some laughs and f-bombs over the previous 365 days, I didn't want to mark this occasion by tooting my own horn -- I figured, why not print the well wishes of those who marked it for me? 'Cause Lord knows I've never done that before. Let's see who's first . . .

I realized the other day your blog was about to turn one year old and just wanted to wish you Happy Blog Birthday, or whatever... even though you didn't do that for me when my blog turned a year old, but that's cool, I know you have a lot of stuff on your plate. But anyway, I hate to bring up uncomfortable subjects, but I'm flat broke and reduced to eating not ramen noodles but the crumbs from old ramen noodle packages I've opened that I swept up off the floor, and since you still haven't completely paid me for the computer of mine you were using, could you send me a check sometime soon? Like, before I turn 30?

Awwww, thanks, baby sis! What a sweetie! 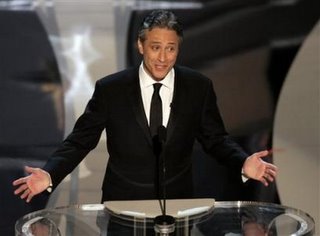 From: Jon Stewart [jstew@comedycentral.com]
Sent: Tuesday, March 7, 2006 12:01 AM
To: Doug Gillett [dougisthesoulmachine[at]gmail.com]
Subject: Happy blogday, or birthday, or something.......

Hey! Wow! Am I the first to wish you a Happy Blog Birthday? God, I hope so! As I was leaving the Shrine Auditorium last night, I was thinking to myself, "Boy, this leading-the-celebration-for-a-bunch-of-knee-jerk-liberals thing is such a lucrative gig, I should try it every day!" Of course, if I'm not the first, then this probably comes off as horribly insulting. I'm sorry. They kept me out late last night and I'm just so very, very tired.

So for real, congratulations on one year of the blogging. On this blog. Which is separate from the others, which you've... in the past have been... f$#! it, don't print this, I'll try again in the morning.

But before I forget, please tell your sister to stop e-mailing me. I'm a married man, for God's sake.

P.S. Colbert says you can bite him. I don't know if the dude's being sincere or not. 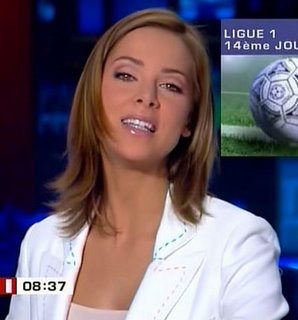 Wow, I'll be honest, I don't know what the shit that means -- I'll let my sister translate it (she owes me one!) and get back to you later. In the meantime . . . 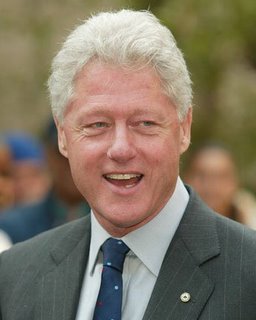 happy birthday to the blog, man! and thanks! ever since you started that thing all I have to do is tell girls, "yeah, that guy who runs hey jenny slater, I know him" and BAM! knee-deep in hot and cold running poontang before I can even turn around! I bow down to you!!!!

that reminds me, when are you going to come up to new york again, man?? hillary will be busy with re-election stuff soon, and when the cat's away THE MICE WILL PLAY!!!! I gotta introduce you to this chick I met at scores -- unbelievable! make the call, dude --

What did I tell you? That guy is awesome. 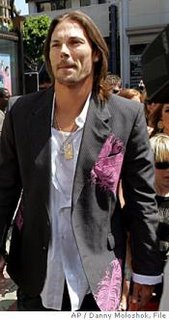 dude i know you think your funny making fun of me, but PoPoZao is TEH ROXXORZ and your just jelous you havent cut a hard core hiphop single yet, oh and by the way YES I AM the true father of Brittney's and my's son, i have the busted condom to prove it, SO THERE if you want me you now where to find me, so just bring that booty on the dance floor oh thats right YOU WONT, cause your just a stupid little bloggy man and YOUR BLOG SUX SO FUC U

OK, so that one wasn't very nice, but this next one's better: 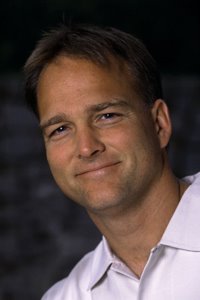 Damon Evans passed along to me some info about the great work you're doing on your blog, and some of your compliments on what we're doing here in Athens. I'm thrilled that you've mentioned us and proud to be able to count you as a fan, though sometimes Kathryn and I wonder why you have to drop the F-bomb so much. Oh, well.

Anyway, congratulations on a year of blogging, and I hope you'll follow our success just as closely in '06 as you did in '05!

(By the way, I hope this isn't a touchy subject, but could you ask your sister to please stop e-mailing me all the time? I'm a married man, for God's sake.)

No problem, Mark! Thanks! 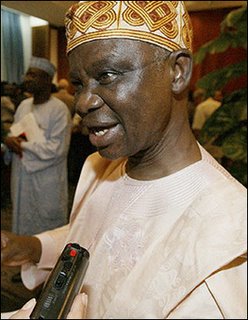 From: "Robert Mkembwe" [robertmkembwe@yahoo.co.ng]
Sent: Tuesday, March 7, 2006 8:05 AM
To: Doug Gillett [dougisthesoulmachine[at]gmail.com]
Subject: I BEG YOUR MOST DISTINGUISHED INDULGENCE

MY NAME IS ROBERT MKEMBWE , I AM A BUSINESSMAN IN LAGOS NIGERIA AND I AM HUMBLED AND BLESSED TO HAVE FOUND YOUR EXTREMELY DISTINGUISHED WEBLOG WHICH HAS BEEN PROVIDING JOY AND INTELLECTUAL STIMULATION FOR A LENGTH OF ONE YEAR. IT IS FORTUITOUS THAT I COME TO YOU TODAY FOR I HAVE A BUSINESS PROPOSAL. WHICH I HUMBLY SUBMIT TO ONLY THE MOST TRUSTED INTERNET PROFESSIONAL IN GOOD STANDING.

IN MAY 2001 A CONTRACT IN THE SUM OF ONE HUNDRED NINE MILLION DOLLARS U.S. ($109 , 000 , 000) WAS AWARDED TO A FOREIGN CORPORATION I REPRESENT HERE IN LAGOS. THE WORK HAS BEEN COMPLETED AS CONTRACTED, BUT $34 MILLION HAS YET TO BE PAID TO THE COMPANY, AND DUE TO RECENT POLITICAL UNREST IN MY COMPANY IT IS NOT BELIEVED THAT ROUTING THE MONEY THROUGH A NIGERIAN BANK WOULD BE EFFICACIOUS AT THIS TIME. I HUMBLY SUBMIT THIS REQUEST FOR YOUR ASSISTANCE IN PROVIDING A SAFE HAVEN FOR THIS TRANSFER OF FUNDS, FOR WHICH I CAN ASSURE YOU WILL BE RICHLY COMPENSATED ...

And anyway, it goes on for quite a bit and there's a bunch of stuff about my bank account routing number and credit cards and blah blah blah, but the point is, I'm gonna be rich, y'all! And all because of this blog turning one year old at just the right time! Lucky, right? 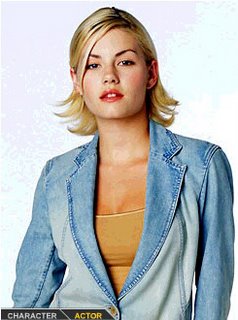 hadn't heard from you in a while and just wanted to see how you were doing..... i know we hadn't talked in a while but i knew the one-year anniversary of your blog was coming up and i wanted to say congratulations. i was talking to benjie the other day and asking him why you hadn't called in so long..... shoot me an e-mail next time you get the chance..... you don't really think that french newscaster chick is hotter than me, do you -- no, never mind, none of my business. forget i asked. 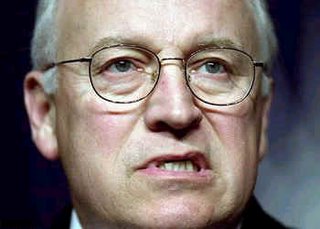 Mr. Gillett, I know you think you're funny making fun of me, but this administration will not be deterred by your naysaying and your stubborn insistence on relying on "facts" and "the real world" -- clearly, your blusterings are the product of a confused young man jealous of the power the Republicans wield in Washington. By the way, YES, WE DID find evidence of weapons of mass destruction-related program activities in Iraq, and I have the intelligence reports to prove it -- I just can't show them to you right now because you don't have security clearance. So there. If you want to continue your so-called discussion, you know where to find me. Just keep in mind that I've still got a shotgun shell left over from that hunting trip I took with Whittington, and I've been anxious to use it, so just step on up whenever the mood strikes you -- oh, that's right, YOU WON'T, because you're just a stupid democrat and your party's weak on national security and YOUR BLOG SUX SO FUC U

You guys! Thanks! Here's to another year of good times! 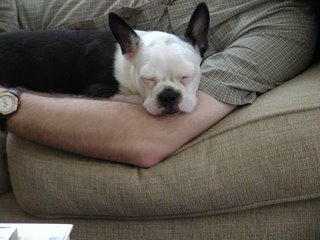 Jenna the Wonder Terrier: "If a blog isn't something I can eat, I officially don't care."
Posted by Astronaut Mike Dexter at 10:45 PM

Congrats Doug - I'm glad that I happened across your blog in the past year. Always great stuff.

Keep on keepin' on, and have fun at the Blogfest - tell Swindle to bring you a moustache - he'll hook you up right.

Hey man, as a proud student of UAB with a penchant for wacky jokes, I just wanna say you're on fire, man. Here's to a smokin' 2nd year!

Hey, Doug, I wanted to ask you a question. Were you born with the knowledge that you were the smartest person on Earth or was there some Saul-on-the-Road-to-Damascus moment?

I'll let you in on something not too many people know about me -- I actually have an IQ of 74, which is considered borderline retarded by most psychiatrists, but because of my near-boundless mental capacity for movie trivia, old football scores, and dick and poopy jokes, I'm classified as an idiot savant. Basically what I do with this blog is I jot down a few ideas each morning with Magic Marker, and I get Updike to do all the actual writing.

In other words, all the blue language on here comes from him, not me. I think it's because he watches "Scarface" twice a day, seven days a week, 365 days a year, without fail. He's also a huge Ice Cube fan.