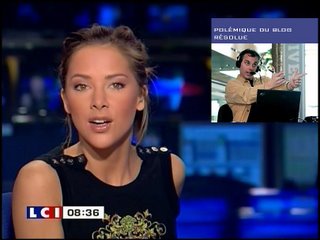 Since I took last week's Colin-Cowherd-boosting-material-from-a-blogger dustup as an opportunity to rip into Cowherd and ESPN, it's only fair that I should give ESPN due credit for owning up to their mistake and resolving the controversy, which they did Monday when Cowherd credited The M Zone for their fake Wonderlic test on his show. (As you can see, this story first aired on Hey Jenny Slater's sister network, LCI, in France.) See, that wasn't so hard, was it, guys?

Now if I could just convince people that Scott Rudin Productions and Paramount Pictures stole their idea for a movie about a guy who lives at home with his parents while happily mooching off of them and bedding a succession of hot chicks from my memoirs. Just so y'all know, I would never have consented to Sarah Jessica Parker being cast as the female lead had I been involved from the beginning.
Posted by Astronaut Mike Dexter at 8:26 AM

Email ThisBlogThis!Share to TwitterShare to FacebookShare to Pinterest
Labels: blogs that are better than mine, melissa theuriau, teh suxxorz

Congratulations- I'm sure it was your email to ESPN that changed the tide. Now give us the real facts about the guy in the background- was that just a good cut and paste job?

Yup, that was just good ol' Microsoft Paint. (I'm not even competent enough to use Photoshop.)

I love the random inclusions of that French chick who does the news in Barbie clothes.