OK, this may seem completely stupid to 99 percent of you, but I had to prove to the world that I'm somewhat, you know, handy. Not to mention concerned with personal hygiene. The reason I actually went down to Columbus in the first place last weekend was that I'd done some heavy-duty painting in my bathroom and the paint needed a few days to dry, and rather than go three or four days straight without bathing -- I don't care how many people in continental Europe do it, it's dirty and wrong -- I figured I'd go partake of the shower facilities at the folks', and get a visit in besides.

The reason I did the painting was because my bathtub looked, well, horrific. Not because of anything I did, mind you -- it was like this when I got the place, as the management takes, shall we say, a casual attitude toward upkeep for the most part. Behold, the "before" picture of my bathtub: 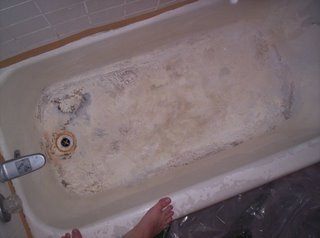 Pretty freaking disgusting, no? (And no, I don't mean my feet, picklewipe.) See, the thing is, when this picture was taken I had just gotten done scrubbing the hell out of this thing. I can only guess that the last time this place was renovated or redone -- sometime during the Eisenhower administration, I'm guessing -- they left a bunch of putty and solvents and what have you in the tub and didn't bother to clean it up. I tried everything short of napalm to scour that crud out of there, but it didn't work; basically, the tub you see there is technically clean, it just looks like an abattoir. So last week I just said hell with it and painted over it using some nice, professional, buzz-inducing epoxy paint. 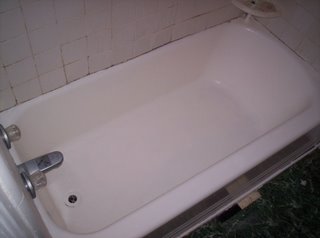 Nice, huh? Of course, the sparkling Crest whiteness of the tub now makes it all the more clear how much work needs to be done on the grouting, but still. We've moved up in ambience from "abattoir" to "cheap motel room," and that's what matters.

As for this post, I suppose the case could be made that it was literally as boring as watching paint dry. For that, my apologies.

(By the way, as someone who has come out strongly against plagiarism lately, I want to make very clear that the "picklewipe" epithet is not something I came up with on my own. Full credit must go to Tressel's World, the most bizarre blog ever written from the point of view of Ohio State's football coach. So, kudos, Jim.)
Posted by Astronaut Mike Dexter at 8:32 PM

I admire your tub. Yes indeed, a vast improvement. Now if you want to get that heat vent known as your chimney shut off, you will measure carefully and send me the dimensions.

I love seeing you being domestic.

picklewipe is now owned by the entire blogosphere.

It's up there with douche rocket on the list of things that once heard should be stolen immediately.