We goin' to Sizzler! 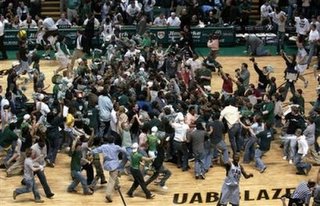 BIRMINGHAM, Ala. (AP) -- The points just stopped coming for No. 3 Memphis -- and so did the wins.

Marvett McDonald had 17 points and UAB held the Tigers scoreless for more than eight minutes down the stretch in an 80-74 upset on Thursday night, sending another top-five team tumbling.

McDonald's jumper gave the Blazers (21-5, 12-2 Conference USA) a five-point lead with 2:47 to go, and UAB made six consecutive free throws in the final 33 seconds to snap the Tigers' 15-game winning streak.

I know there are times when y'all probably expect this to be an all-UGA-all-the-time blog, but I have to give props to the hometown team, and UAB definitely deserved the props last night. It wasn't quite the "Rumble in the Jungle," or even the climactic game at the end of "Hoosiers," but it was a big deal, all right -- I got to watch UAB whack the third-ranked team in the nation and turn what was a likely NCAA tournament bid into pretty much a dead-solid lock. ESPN's "Bracketology," for some reason, had the then-20-5 Blazers listed as one of the "last four out" before this game; I'd expect, at the very least, to see them slotted in as an 11th or 10th seed now, barring a complete bedshitting in the Conference USA tournament.

I hope that the pundits and tournament selectors take notice not just of the fact that UAB won but of the way they won -- rather than the Dean Acheson-like strategy of containment that so many teams (including UAB) have tried, and failed, to employ against Memphis earlier in the season, the Blazers became full-on MacArthurs against UM, particularly in the second half -- blocking shots, going toe-to-toe with the Tigers and forcing ugly turnovers, and basically doing everything they could to get into Memphis's head. In particular, Wen Mukubu, both on offense and defense, was the Anthony Hopkins to Memphis's Jodie Foster, schooling them in the art of true sickness while scaring the crap out of them at the same time. 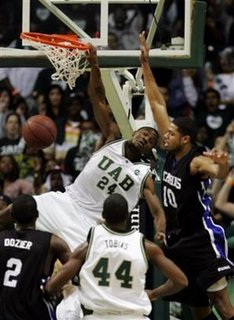 Don't stand too close to the glass, Rodney Carney.

But props are also due to Marvett McDonald, who pulled down 17 points and, in the critical last couple minutes of the game, was 4-for-4 at the FT line (on what was not a particularly good free-throwing night for the team overall) to put the game away. McDonald, despite being the team's leading scorer, catches what occasionally might be more than his share of shit around these parts for being a very streaky shooter. He's kind of like the Ben Affleck of the team, a talented, likable guy who nevertheless can drive you crazy sometimes with his choices -- one minute he's on a tear, charming audiences as Holden McNeil or the charmingly rough-around-the-edges Chucky Sullivan (which I guess would make Squeaky Johnson his brilliant but haunted pal Will Hunting -- sorry, have I taken this too far already?), the next he's turning out a string of duds like "Pearl Harbor" and "Gigli" that makes you wonder if it will ever end. Be that as it may, though, he was on last night. We've got one more regular-season game to go, a home matchup with Marshall that could be described as "highly winnable," and if we take that then we should have a nice big head of steam heading into the conference tournament and, I would think, the NCAAs.

Anyway, it's nice to be able to enjoy this kind of excitement in basketball, because football certainly isn't giving me anything to be happy about. There isn't much going on at all in college (not until Bloggerpalooza '06 blows up the spot in about a month's time), while in the NFL, there's a labor dispute whose most likely result is the screwing-over-with-extreme-prejudice of a bunch of teams currently in salary-cap trouble, which of course includes the Redskins. I'm anxiously steeling myself for the Washington Post story in a few weeks' time about how the 'Skins have cut Lavar Arrington, dumped Patrick Ramsey's body in a shallow grave just outside Rockville, and enticed Elvis Grbac out of retirement just so they can sign him as the new backup QB. At minimum wage.

Even with that hanging over my head, though, I can't help but laugh about this. I'm quite confident there are thousands, if not millions, of "bobblehead" jokes to be made here -- I'm just going to leave it to y'all to make them.
Posted by Astronaut Mike Dexter at 8:15 AM

You need to read my devotionals... the more alcohol you've consumed, the better. Oh yes, all who are hearing my words right now, do I have a glorious message for you! Come to my blog - you've never heard such a message as this!