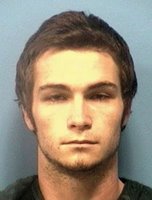 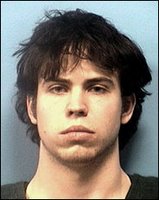 Over the course of my life, I have claimed no fewer than eight different cities as my official residence at one time or another. In the past month, half of those have been revealed to be home to some kind of depravity, malfeasance, or miscellaneous weirdness:

· Columbus, Georgia, February 28: A mental-health facility is revealed to have farmed patients out to work security at football games.

· DeKalb County (Atlanta), Georgia, March 7: A woman commits suicide during afternoon rush hour by leaping off the I-285 overpass down to I-85 below.

· Athens, Georgia, March 8: A 48-year-old man and a 68-year-old UGA booster get into a fistfight in the middle of a street over one man's dog barking at another man's dog. The 68-year-old proceeds to whup the 48-year-old's ass.

· Birmingham, Alabama, March 9: The culprits in a string of church arsons around central Alabama are revealed to be three college students who called the burnings "a joke."

Yup, funny stuff, guys. I guess we can now expect an apology from all the Christian Coalition folks here in Alabama who were just certain that the fires had to have been started by a bunch of god-hating liberals . . . well, I'll let someone else hold their breath for that. In the meantime, I'll just roll my eyes and make the jerk-off gesture over stuff like this (courtesy of the New York Times):

In the area on Mr. Moseley's page where visitors can post messages, alongside more than 12 expressing shock at the arrests and promising to pray for the accused, was one that Mr. Cloyd posted on Jan. 9. It read:

"To my dearest friend Moseley:

"The nights have grown long and the interstates of Alabama drunk driverless, the state troopers bored, the county sheriffs less weary, and the deer of Bibb County fearless. 2006 is here, it is time to reconvene the season of evil! Only one problem stands in our way. I got a new cellphone for Christmas and I no longer have your number, so send it to me and evil shall once again come to pass!

"May our girlfriends be concerned about our safety, may our parents be clueless, may our beers be frosty, may our love lives be fruitful, may our weed be green as the freshly mowed grass!"

So from this we can deduce that what we have here is not a bunch of God-hating leftists, not a couple disgruntled employees, not even a bunch of Satan worshippers, but . . . three dorks. Three whitebread, suburban dorks.

Well. I'm going to steal a page from my sister's book and replace the usual Friday Random Ten with an extra-special custom-made Friday Not-So-Random Ten . . . Benjamin Moseley, Russell DeBusk and Matthew Lee Cloyd, this is your life:

Other crap in the news:

· Jessica Simpson will soon be testifying before Congress on behalf of a charity called Operation Smile. Well, that's only fair, right? The Supreme Court got to gawk at Anna Nicole Smith for a few days, so Congress gets Jessica Simpson? Here's the quote I thought was funny: "A source claims, 'She's in the phase of her life now where she wants to use her celebrity for good.' " That's swell. I was getting tired of the phase where she was using her celebrity for evil.

· Dear Jewish people: Just in case any of you were thinking you could make it into heaven without accepting Jesus Christ as your Lord and Savior, Jerry Falwell would like to remind you this is categorically not the case. This means YOU, Ian!

· Speaking of bad-ass Jewish people, I was totally going to throw the Natalie Portman gangsta-rap video from last week's "Saturday Night Live" up on here, but if what Matt Lavine tells us is any indication, that's a good way to get in trouble with NBC's lawyers -- so instead I bring you the following, also found at YouTube. Don't know where the hell it came from, but I found it delightfully appealing to both my inner child and my inner dirty old man. How NSFW it is depends on what your W is -- if you work at a sports-radio station, it's probably fine; if you're reading this at the Bob Jones University computer lab, not so much. (What am I talking about? There's no way you're reading this at BJU -- their NetNanny software probably pre-emptively electrocutes you if you even think about coming to this site.)

· By the way, congrats to Paul for half a million hits -- I'm not wearing a cap right now but if I were I would doff it to you, sir.
Posted by Astronaut Mike Dexter at 8:05 AM

Email ThisBlogThis!Share to TwitterShare to FacebookShare to Pinterest
Labels: blogs that are better than mine, embedded video, Friday Random Ten, my hometown Columbus, Mystery Meat, stupidity, you know what I blame this on the breakdown of? society